The main raw material of the magnetic beads is ferrite. The ferrite is a cubic ferromagnetic material with a cubic lattice structure. The ferrite material is iron-magnesium alloy or iron-nickel alloy. Its manufacturing process and mechanical properties are similar to those of ceramics. The color is grayish black. One type of magnetic core often used in electromagnetic interference filters is a ferrite material, and many manufacturers provide ferrite materials specifically for electromagnetic interference suppression. This material is characterized by a very high frequency loss and a high magnetic permeability, which minimizes the capacitance generated by the high-frequency high-resistance between the coil windings of the inductor. Ferrite materials are commonly used in high frequency situations because they exhibit predominantly inductive properties at low frequencies, resulting in low losses. At high frequencies, they mainly exhibit reactance characteristics and change with frequency. In practical applications, ferrite materials are used as high frequency attenuators for RF circuits. In fact, the ferrite can be better equivalent to the parallel connection of the resistor and the inductor. The resistor at the low frequency is short-circuited by the inductor, and the impedance of the inductor at a high frequency becomes so high that the current passes through the resistor. Ferrite is a consumer device in which high-frequency energy is converted into thermal energy, which is determined by its electrical resistance characteristics.

For ferrites that suppress electromagnetic interference, the most important performance parameters are permeability and saturation flux density. The magnetic permeability can be expressed as a complex number, the real part constitutes the inductance, and the imaginary part represents the loss, which increases as the frequency increases. Therefore, its equivalent circuit is a series circuit composed of an inductor L and a resistor R. As shown in FIG. 1, the inductor L and the resistor R are both functions of frequency. When a wire passes through such a ferrite core, the resulting impedance of the inductor increases in form as the frequency increases, but the mechanism is completely different at different frequencies.

In the high frequency band, the impedance is mainly composed of a resistance component. As the frequency increases, the magnetic permeability of the magnetic core decreases, resulting in a decrease in the inductance of the inductor and a decrease in the inductive component, but at this time, the loss of the core increases. The increase in the resistance component causes the total impedance to increase, and when the high frequency signal passes through the ferrite, the electromagnetic interference is absorbed and converted into heat energy. In the low frequency band, the impedance is mainly composed of the inductive reactance of the inductor. When the low frequency is small, the magnetic permeability of the magnetic core is high, so the inductance is large, the inductance L plays a major role, and the electromagnetic interference is reflected and suppressed, and this When the loss of the core is small, the whole device is a low-loss, high-quality factor Q-inductive inductor, which is easy to cause resonance, so the interference enhancement after the use of the ferrite bead may occur at a low frequency band.

It is worth noting that the energy of the high-frequency noise is converted into heat energy by the coupling of the ferrite magnetic moment and the lattice, instead of introducing the noise into the ground or blocking it back, such as a bypass capacitor. Therefore, when the ferrite bead is mounted in the circuit, it is not necessary to set a grounding point for it. This is a prominent advantage of ferrite beads.

The figure below shows an example of the impedance frequency characteristics of the sheet-like ferrite bead. The basic principle involved is as follows: As the frequency rises, the impedance increases proportionally with the increase of the inductor, so by connecting these beads in series in the circuit, they act as low-pass filters. For conventional inductors, the main feature in the impedance (Z) value is the reactance component (X). 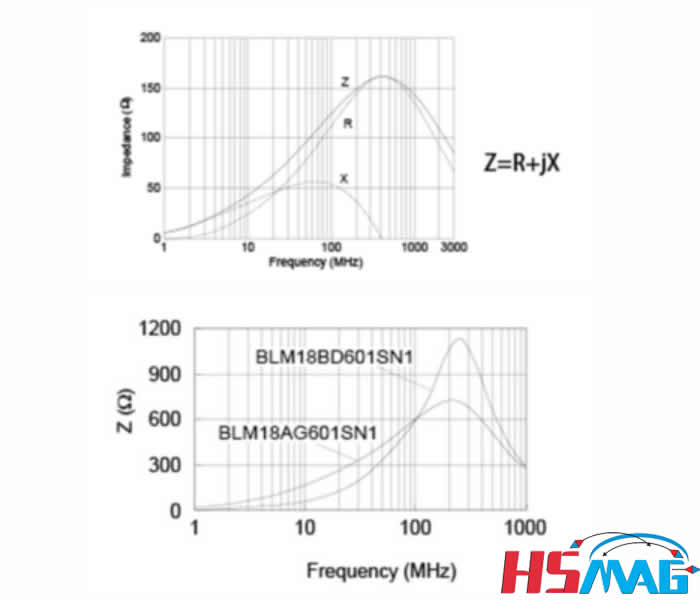 For a type in which the impedance curve rises gently, the impedance starts to increase at a lower frequency level, so noise can be suppressed on a wide frequency band from a very low frequency to a high frequency. However, if the signal frequency is relatively high, the frequency may also decay.

On the contrary, for the type in which the impedance curve rises sharply, the impedance increases only in the high frequency range, so even if a signal having a relatively high frequency is used, the noise can be suppressed without affecting the signal. Therefore, when selecting a sheet-like ferrite bead, it is important to consider the signal frequency at which noise is suppressed.