A wiggler is an insertion device in a synchrotron. It is a series of magnets designed to periodically laterally deflect (‘wiggle’) a beam of charged particles (invariably electrons or positrons) inside a storage ring of a synchrotron. These deflections create a change in acceleration which in turn produces emission of broad synchrotron radiation tangent to the curve, much like that of a bending magnet, but the intensity is higher due to the contribution of many magnetic dipoles in the wiggler. Furthermore, as the wavelength (λ) is decreased this means the frequency (ƒ) has increased. This increase of frequency is directly proportional to energy, hence, the wiggler creates a wavelength of light with a larger energy.

A wiggler has a broader spectrum of radiation than an undulator.
Typically the magnets in a wiggler are arranged in a Halbach array. The design shown above is usually known as a Halbach wiggler.

Wiggler magnets
The simplest wiggler magnet consists of 3 poles and produces one oscillation of the electron beam. The total electron bending angle “and hence the angular divergence of the radiation, although small about 1-5″, is larger than the opening angle of the radiation <0.05”.
The fan of radiation produced by the wiggler is thus large enough that two or more simultaneous experments can share the beam. The center pole is generally operated at a field higher than the bending magnets of the ring to extend the spectrum to higher photon energies. The spectral distribution is a smooth continuum as it is for the bending magnets. For wigglers and bending magnets the spectrum is characterized by the critical energy.

In most cases the magnetic field is vertical “that is, perpendicular to the ring plane. because the aperture required by a stored beam is generally less in that direction than in the other direction. This permits smaller gaps and stronger fields in the vertical direction. However, a horizontal!field device produces a vertical deflection and hence a vertically polarized synchrotron radiation beam. This is an advantage in certain diraction experiments. Such a vertically deflecting wiggler, a 60kG superconducting magnet, is under construction for the Photon Factory in Tsukuba, Japan. 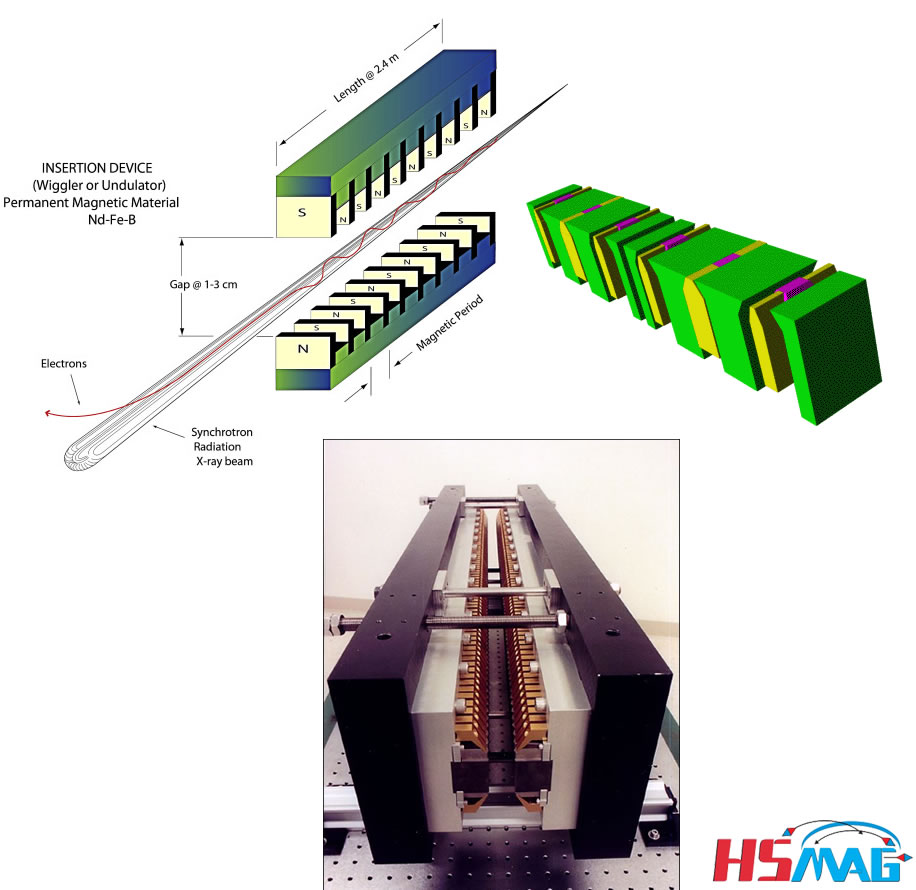 To assure a net zero displacement of the beam, the wiggler field must have mirror symmetry about the transverse midplane of the magnet. Thus, although there are three physical poles in this simplest wiggler there are only two equivalent full poles: The two outside poles each produce half the deflection of the center pole, in the opposite direction. The outside poles may be operated at lower field than the, central full pole, contributing less high!energy radiation. Furthermore, the orbit displacement in the wiggler may be large compared to the transverse size of the beam; the radiation from the center then originates from a dierent! source point than radiation from the end poles, and only radiation from the central pole may be useful. The three!pole wiggler thus shifts the spectrum to higher photon energies but usually provides no overall intensity enhancement because only one pole is really used. Such a one, period wiggler is also called a wavelength shifter.
Adding more full poles produces more oscillations: one additional oscillation for each pair of additional poles.
For example, a wiggler with three central full poles and two end half poles “equivalent to four full poles produces two oscillations of the electron beam. If the amplitude of the oscillation is smaller than the transverse beam size “as it usually is”, such a device would enhance the overall intensity “compared to the bending!magnet spectrum” by a factor of three to four “depending on the strength of the end poles” as well, as shift the spectrum to higher photon energies. Depending on the space available in the straight section of the ring and on the angular acceptance of the beam pipe for the radiation, the number of poles may be increased to eight or more equivalent full poles, providing an intensity enhancement of a factor of seven to eight or more, as well as a hardening of the spectrum. In cases where the radiation is focused, the full intensity enhancement may not be realized, because the source of the radiation is now extended.