Microstepping is a method of controlling stepper motors, typically used to achieve higher resolution or smoother motion at low speeds.

Stepper motors move in discrete steps, or fractions of a revolution. For example, a stepper motor with a 1.8 degree step angle will make 200 steps for every full revolution of the motor (360 ÷ 1.8). This discrete motion means the motor’s rotation isn’t perfectly smooth, and the slower the rotation, the less smooth it is due to the relatively large step size. One way to alleviate this lack of smoothness at slow speeds is to reduce the size of the motor’s steps. This is where microstepping comes in.

Microstepping control divides each full step into smaller steps to help smooth out the motor’s rotation, especially at slow speeds. For example, a 1.8 degree step can be divided up to 256 times, providing a step angle of 0.007 degrees (1.8 ÷ 256), or 51,200 microsteps per revolution. 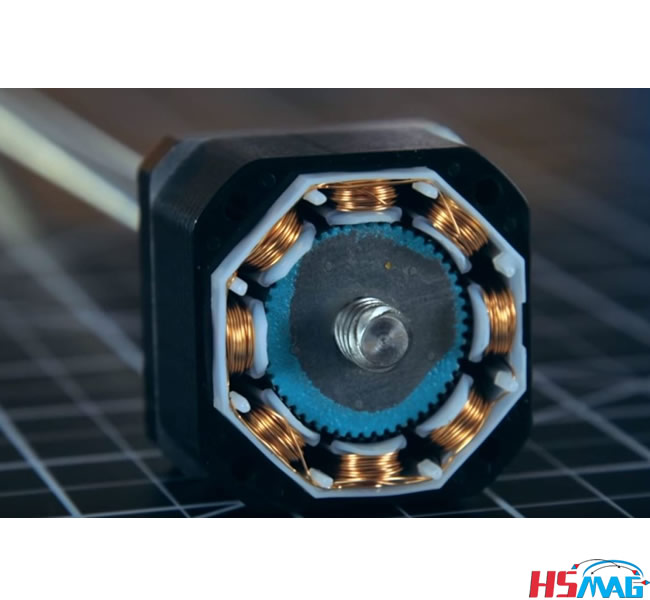 Microstepping is achieved by using pulse-width modulated (PWM) voltage to control current to the motor windings. The driver sends two voltage sine waves, 90 degrees out of phase, to the motor windings. While current increases in one winding, it decreases in the other winding. This gradual transfer of current results in smoother motion and more consistent torque production than full- or half-step control.

While the smoothness of torque delivery, low-speed motion, and resonance are improved with microstepping, limitations in control and in motor design prevent them from reaching their ideal characteristics. This is primarily because microstepping drives can only approximate a true sine wave, so some torque ripple, resonance, and noise remains, although each one is greatly reduced in comparison to full- and half-stepping modes. In addition, torque production from a stepper motor with microstepping control is only about 70 percent of the torque produced with full-step control.

Microstepping is sometimes considered a good alternative to mechanical gearing because it does not introduce backlash into the system or reduce the system’s maximum speed. However, mechanical gearing multiplies the torque from the motor and increases its position-holding capability.

It’s important to avoid what is sometimes referred to as “empty resolution,” where the division level of the steps (i.e. the resolution) is higher than practical for the system constraints. This most often occurs when the torque produced by the microstep is insufficient to overcome the friction torque of the component that’s being driven (such as a leadscrew or ball screw). The incremental torque per microstep is determined by the following equation:

For a motor with 0.35 Nm holding torque using a 256 step division ratio (SDR), the incremental torque produced by each microstep would be 0.002 Nm.

If the screw has a friction torque of 0.06 Nm, it will take 30 microsteps (0.06 ÷ 0.002) to generate enough torque to cause the screw to move. In addition, operating with more steps per revolution requires a higher frequency for the pulse train driving the motor. Using the 256 SDR in the previous example means the motor takes 51,200 steps, or pulses, per revolution (200 full steps per revolution x 256 microsteps per step). At a motor speed of 100 rps (6000 rpm), the required pulse frequency is more than 5 MHz.