Earth is like a giant magnet in several ways. Not only does it have a magnetic north and south pole that act similarly to the poles on bar magnets, but the planet is surrounded by a strong magnetic field, which is electrically charged and able to interact with magnetized matter.

The Earth’s magnetism is a direct result of a process called the dynamo effect. In the dynamo effect, the Earth’s solid core transfers heat through the molten outer core and up to the surface of the planet via convection, according to Why Do. This causes the liquid part of the core to move, which results in an electrical current. The movement of the Earth as it orbits and spins keeps the liquid core, which is made up of primarily iron and nickel, in constant motion as well. This is why the magnetic force never falters or gets weaker.

Interestingly, most planets and moons are not as magnetic as Earth, which makes the planet unique and interesting in many ways. In fact, most heavenly bodies have very little or no magnetic properties. This is just one of the ways that the planet Earth stands out among the planets, moons and stars in the solar system. 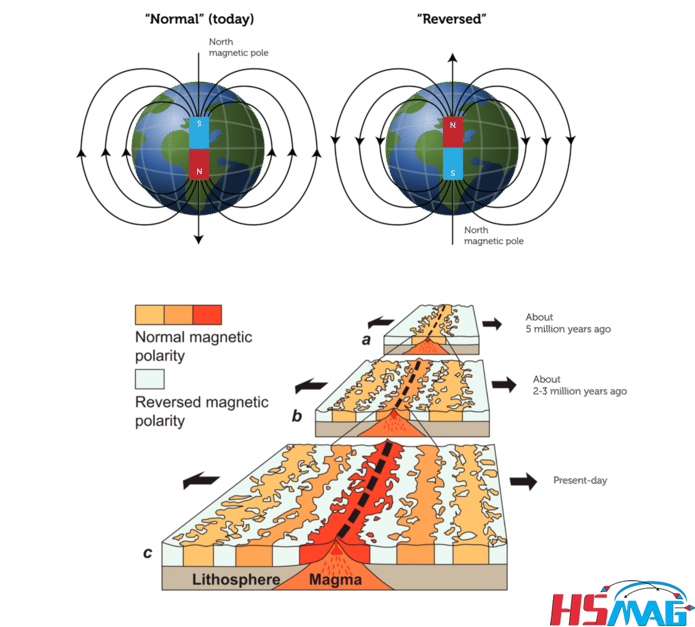 What Is Magnetic Reversal

Do you like science fiction? This is a fictional scene that is set in the future. Science fiction artists are so creative! They might even describe a time when compasses point south instead of north. Actually, this idea isn’t fiction—it’s a fact.

Fact, Not Fiction
Scientists don’t know for certain why magnetic reversals occur, but there is hard evidence that they have for hundreds of millions of years. The evidence comes from rocks on the ocean floor. Look at Figure below. They show the same ridge on the ocean floor during different periods of time.

A. At the center of the ridge, hot magma pushes up through the crust and hardens into rock. Once the magma hardens, the alignment of magnetic domains in the rock is frozen in place forever. Magnetic domains are regions in the rocks where all the atoms are lined up and pointing toward Earth’s north magnetic pole.

B. The newly hardened rock is gradually pushed away from the ridge in both directions as more magma erupts and newer rock forms. The alignment of magnetic domains in this new rock is in the opposite direction, showing that a magnetic reversal has occurred.

C. A magnetic reversal occurs again. It is frozen in rock to document the change. Magnetic Poles

Rock samples from many places on the ocean floor show that the north and south magnetic poles reversed hundreds of times over the last 330 million years. The last reversal was less than a million years ago. White Write-on Magnetic Labels 100mm x 30mm

What will happen the next time the Earth’s magnetic field reverse? Watch the video below to learn more: