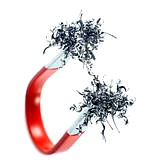 Ferromagnetism is a property of a material in which particles called magnetic moments organize parallel to one another when there is a magnetic field. These particles remain in place even when the magnet is taken away. Magnetism occurs on an atomic level, with the field having a direct affect on the electrons in an atom. Electrons that spin in opposite directions can be in the same orbit of the atom, and even change orbits, causing them to have a stronger repulsion. Called Coulomb repulsion, this allows the electrons to be arranged in parallel and results in the parallel structure of ferromagnetic materials such as iron and nickel.

Temperature has a strong influence on ferromagnetic materials as well. Depending on the material, it will become paramagnetic at a certain temperature, at which the magnet moments point in random directions. The order is disrupted by the thermal energy. At what temperature this phenomenon occurs is determined by equations derived from the Curie-Weiss Law of ferromagnetism.

In ferromagnetism, a material is not completely filled with parallel electrons. There are domains where the electrons are arranged as such, but the total magnetic energy is also influenced by the shape of an object, from which its magnetostatic energy is derived. A ferromagnetic material is also affected by the atomic structure, so the magnetocrystalline energy can vary along different axes. Magnetostrictive energy is that which causes small changes in the length of materials when they are magnetized. Where the magnetic energy causes the direction of magnetization to shift is called a domain wall, which is seen in ferromagnetism of crystalline structures.

The ability of ferromagnetic materials to revert back to previous arrangements has been used as the basis for computer memory. Random access memory (RAM) in the 1970s used iron to create polar magnetic forces that served as a way to create binary signals during memory storage. Hysteresis is a magnetic property utilized to take advantage of whether the magnetization can be reversed or not. It is not present in ferromagnetic materials that are reversible and return to a demagnetized state when magnetic fields are removed. 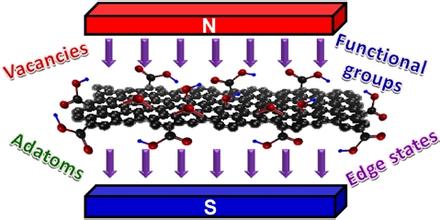 A permanent magnet stays magnetized, and when a strong enough field in the opposite direction of the first one is applied it can reverse polarity. The point at which this happens is not dependent on specific mathematical values, but is represented by a graphical curve for hysteresis. Ferromagnetism is where materials remain magnetized due to their internal structure and is one of the most studied principles of magnetism.