The proportioning of permanent magnets, that is the ratio of the magnet pole areas to the magnet thickness (L/D-ratio) of any magnet material, is subject to the laws of physics.
The maximum operating temperature also depends on the L/D-ratio. A thin NeoDelta magnet disc of 15 ø x 2 mm e. g. can only be used up to a maximum operating temperature of + 70°C, whereas a thicker disc of 15 ø x 8 mm can be used up to approx. + 100°C.
In the case of most modern magnet materials the remanence and the coercivity decreases on warming.When the temperature drops both values rise. This generally means that there is an improvement in most magnet systems up to – 40°C. For example SmCo magnets can be used in temperature areas below zero, which are necessary for the production of superconductors.
The magnetisation of rod magnets with a kept-in preference direction (anisotropy) during production is possible only in the preference direction.
It is not possible to state the holding force of an “open” permanent magnet. The “open” permanent magnet is surrounded by a magnet field of differing densities. The holding force is essentially determined by the magnetic effect on the iron to which the magnet is stuck. Thin iron plate holds less well, thick flat bar sticks better. There are a great variety of special magnets for adhesion on iron and steel for which all the magnetic energy will be concentrated on the active surface using iron poles. 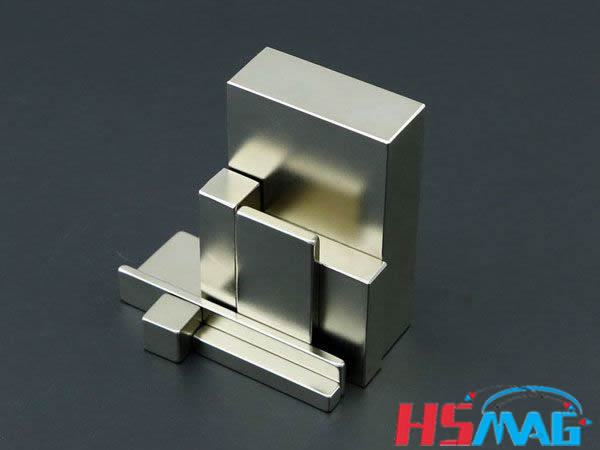 High-energy magnets made from NeoDelta Magnet (NdFeB) have to be stored dry, otherwise the surfaces would oxidise.
Storage in a hydrogen atmosphere destroys these magnets.
A demagnetisation is caused when permanent magnet materials have been exposed to radioactivity over a long period.
Small hairline cracks and cracks on the edges of sintered permanent magnets are not always avoidable during production. This does not affect the magnetic values, and should therefore be tolerated on purchase.
All sintered permanent magnets are hard and brittle.They split into many sharp-edged fragments when colliding with each other as a result of magnetic attraction. This especially occurs with high-energy magnets, and can also cause pinching of the skin when there are high attraction forces.
Permanent magnets are surrounded by magnetic fields. These magnetic fields can disturb and even destroy sensitive
electronic measuring devices as well as mechanical watches.
Usually a distance of 0.5 m is enough to avoid damage. Persons with cardiac pacemakers should completely avoid magnetic fields.
Harmful effects of magnetic fields on the human body, like those of permanent magnets, are not known. Tests are
currently being conducted into the effects on the human body of very high magnetic fields over 3 Tesla. In naturopathy and empirical medicine magnetism is used to cure illnesses. Even Paracelsus described the use of permanent magnets in his work. Later, Mesmer (1734 – 1815) formulated a theory on how to cure illnesses using magnetism. Except for a few applications, the cure with magnetism is not acknowledged by mainstream conventional medicine.