Undulator is one of the key equipment of the third-generation synchrotron light source and free electron laser device. Permanent magnet vacuum undulator occupies a fairly large proportion in numerous permanent magnet undulators. Undulator magnet is regarded as the heart of vacuum undulator. Its comprehensive magnetic characteristics have significant influence on the peak value, distribution and stability of the magnetic field. Both Samarium Cobalt magnets and Neodymium magnets are utilized as the undulator magnet. In order to adapt strong electromagnetic radiation environment, Samarium Cobalt magnet was the top choice in the early undulator, then high-performance Neodymium magnet dramatically enhanced the peak value and quality of vacuum undulator. Cryogenic permanent magnet undulator has become the research focus of international synchrotron radiation area, thus Praseodymium magnet substitute Neodymium magnet which has a spin reorientation transition under low temperature. 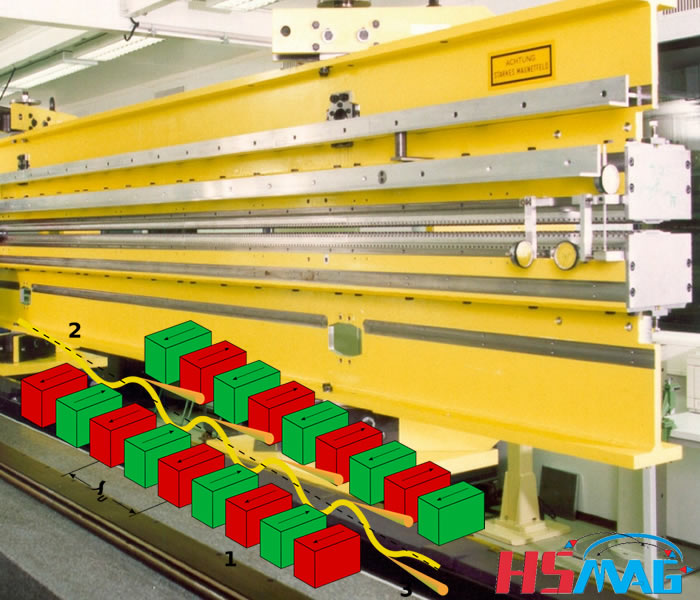 The undulator is a long periodic arrangement of short dipole magnets with alternating polarity. The undulators at FLASH are made from iron pole shoes with NdFeB permanent magnets.

in between. To achieve FEL saturation in a single pass the undulator must be more than 20 m long for wavelengths in the 10-nanometer regime. The FLASH undulator system consists of six magnets of 4.5 m length each.

In the 60-cm space between the segments, quadrupole lenses are installed for beam focusing alongside beam diagnostics tools. An excellent field quality has been achieved in the undulator, the deviation of the electrons from the ideal orbit is less than 10 μm. This ensures a good overlap between the electron beam and the light wave, which is a prerequisite for achieving a high gain in the lasing process.

A device used in a free-electron laser to convert the electron-beam’s energy into microwave laser radiation by creating a magnetic field of alternating polarity through which the free electrons are passed, causing them to “wiggle” and release radiation. Also known as a wiggler magnet.

When relativistic electron which moving near the speed of light do curve movement and change direction under the magnetic field, its energy loss will emit along the tangential direction in the form of electromagnetic radiation. This radiation was firstly discovered by synchrotron of GM on 1947 and named synchrotron radiation. Scientists found synchrotron light has many excellent performances which conventional light source cannot be compared, includes the wide spectrum, high brightness and polarization. These performances bring the broad prospect for scientific and application research. Almost all high energy electron accelerators have constructed synchrotron radiation station and experimental apparatus. As a core component, undulator magnet was also participated in the development process of synchrotron radiation.

An undulator is an insertion device from high-energy physics and usually part of a larger installation, a synchrotron storage ring, or it may be a component of a free electron laser. It consists of a periodic structure of dipole magnets. These can be permanent magnets or superconducting magnets. The static magnetic field alternates along the length of the undulator with a wavelength λu. Electrons traversing the periodic magnet structure are forced to undergo oscillations and thus to radiate energy. The radiation produced in an undulator is very intense and concentrated in narrow energy bands in the spectrum. It is also collimated on the orbit plane of the electrons. This radiation is guided through beamlines for experiments in various scientific areas.

A free-electron laser (FEL) is a kind of laser whose lasing medium consists of very-high-speed electrons moving freely through a magnetic structure, hence the term free electron. The free-electron laser is tunable and has the widest frequency range of any laser type, currently ranging in wavelength from microwaves, through terahertz radiation and infrared, to the visible spectrum, ultraviolet, and X-ray.