Begin with naming all the parts. There are 8 parts to the Electromagnetic Spectrum. They are:
Radio Waves
Microwaves
Terahertz Radiation
Infrared Light (IR)
Visible Light
Ultraviolet Rays (UV)
X-Rays
Gamma Rays
By understanding these names, you will need to know its range. Below is showing a table of the range. 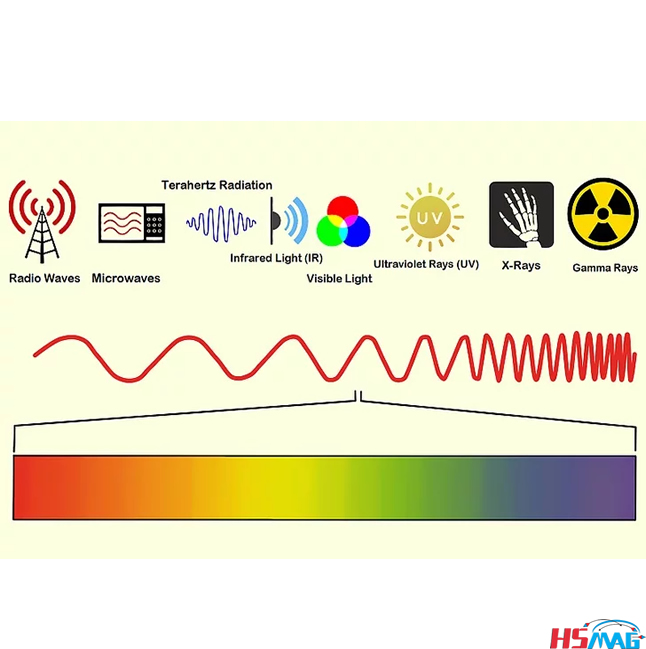 Learn what the range of the radio waves that are listed above. You can research it on the internet. You don’t have to memorize all of the things that use radio waves and what range that it uses, but it is vital to actually have a general idea.

Store your data in a place where you can remember. A folder stored in a drawer is the best idea, but other ideas are good too. Also, below is how things work with radio waves (the y in the picture is short for gamma rays). Do this step last after every section.

Learn what items use microwaves. Certain objects use this kind of radiation, but not very many (at least not as many as radio waves). Microwave energy is produced with klystron and magnetron tubes, and with solid state diodes such as Gunn and IMPATT devices. Microwaves use microwaves to heat up food. They are actually absorbed by the water, sugar, and fat in the food, and that is why they heat up. The plate stays cool since it doesn’t have any water or fat. The power level varies on the energy of the microwave.

Understand how they work. You only need to get the general idea. For example, for microwaves, you only need to know that the microwaves are absorbed by water, sugar, and fat when heating them up. You don’t need to know about how it works, or the complex algebra that it uses. If you do this, it will be very hard to remember (which will be discussed later) and you might fail. It is best to remember some detailed information that you can remember, but not the ones you can’t.

Understand why it is used. For example, microwaves are used for heating up food depending on the power level. If items were invented, and they were never used, would it be some extra item taking up space?

Relay microwave radio and television and other signals in a technology for transmitting digital and analog signals. This technology includes transmitting telephone calls and the relay of television programs to transmitter antennas, between two locations on a “line of sight path.” In microwave radio relay, radio waves are transmitted between the two towers at locations with directional antennas, forming a fixed radio connection between the two points. Long chained series of such links form transcontinental telephone and/or television communication systems.
Maintain a line of sight radio link as the microwave radio frequencies used can occupy only a narrow path between antennas (with the exception of a certain radius of each station). Antennas used must have a high directive effect; these antennas are installed in elevated locations such as large radio towers in order to be able to transmit across longer distances without obstructions in the path.

Learn what items use Infrared waves. It includes cameras, tracking, night vision, and remotes. There are many more things that use infrared waves, but the 4 listed above is a good start. Later on, you can research more on Wikipedia. If you want to understand how these work, you can teach other people, and you might become an engineer. However, most people don’t do that, and merely gets it into their thought.

Understand why and how it is used. Again, you don’t need to know about the “scientific method,” but you can get some information about how the geo-thermal technology works in order to determine the temperature of something. For cameras which use infrared light waves of about 1-20 micrometers, you should understand how it works and where the infrared light will come in.

“Copy.” Basically do the same thing for Infrared light and the other parts to the spectrum (shown above by steps). They will be all the same. When you are finished with the gamma rays, you should move on to how to remember these things (it may seem complicated to you, but you will get used to it).

Make sure you have the right things assembled and in a folder. The spectrum contains information that may lead to more inventions even in the modern world. If you do wish to be a scientist, or are already one, be aware of all the possible combinations that can lead to success.

Go over this maybe 2 or 3 times a week, especially if this is for a project. The information you researched can make a difference in real life.

Propose ideas. Again, this may be important. You must learn the concept before you become more aware of the situation.

Be calm. This isn’t something to stress out with. Try not to when you realize that you still have much to learn. It takes time and patience, and by using it wisely, you can accomplish your goals. Maybe you could think of an idea for a pair of UV or even X-Ray goggles. It all depends on you.

Safe and Effective Use of Electromagnetic Equipment

What Is Electromagnetic Lock and How It Works?

How to Determine Polarity of Magnets