A Texas-based company recycles neodymium-based magnets to make new ones.

Virgin material suppliers are being affected by geopolitical issues, such as rare earth metal-rich China’s trade war with the USA, which relies on imports for its technology manufacturing. According to US Geological Survey, the USA imports 80% of its rare earths from China, which in 2018 had a mine production of 120,000 tonnes (t) and 44 million tonnes (Mt) of reserves. Meanwhile, the USA mined 15,000t and had 1.4Mt of reserves. According to a report by the Foreign Policy Research Institute, Digging deeper: rare earth metals and the US-China trade war, published in June 2019, the USA reduced its production of rare earths by the early 2000s because of the high costs and environmental impacts involved in refining such materials. Simultaneously, China exported its lower cost production to eventually dominate world production. Recycle Rare Earth Magnets 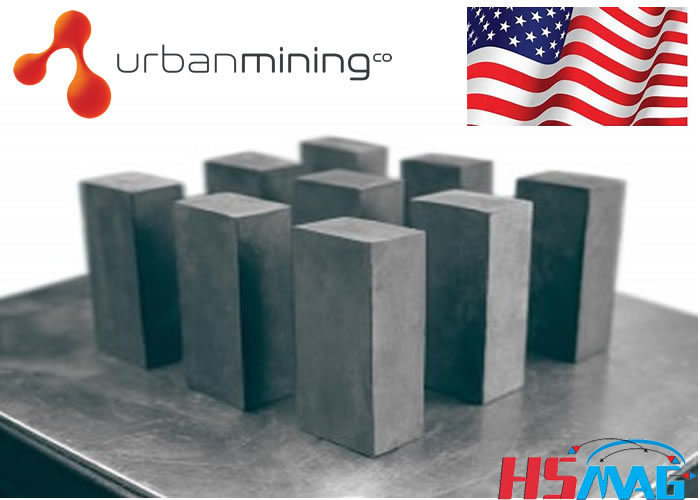 Rare earth metals are often used in magnets, which are critical for a wide range of applications including electric propulsion, wind turbines, robotics, electro-mobility, and a variety of medical devices. Based in Austin, Texas, UMC collects feedstock, for example from computer hard drives and parts from discontinued MRI machines, separates the materials using automated tools, and then uses the recovered rare earth magnet in a dry powder metallurgical process to create new parts. The core product is a high-performance sintered neodymium magnet with a high power density. Such magnets are made of rare earth metals and iron, forming a Nd2Fe14B compound that can be magnetised.

To separate the materials, pneumatic tools and robots carry the feedstock through a separator, removing the case, circuit board and the magnet. Once the magnet component has been isolated, it goes through a demagnetisation process. In some cases, using X-ray fluorescence, the magnet is identified and separated from a mixture of materials. Additive high-entropy alloy materials are then mixed with waste magnets to make final products of near-net shape, or block ingot which can be further machined to a tolerance and a specification. Meanwhile, the aluminium body may be re-melted and turned into new metal, and the printed circuit board can be recovered with 99% purity and recycled for precious metals. Recycle Rare Earth Magnets

UMC’s objective is to use 100% recycled Nd2Fe14B powder for the production of new permanent magnets, providing producers with the benefit of a more economical source of rare earth raw metals. UMC Executive Vice President, Peter Afiuny, said although chemical and electrochemical processes such as solvent extraction electrolysis can be used to separate materials including neodymium, praseodymium, dysprosium, terbium, gallium, zirconium, iron and aluminium – all used in magnets – they usually require large energy usage.

Also, bulk recycling did not necessarily afford the most economical or environmentally friendly way to maximise the life of the metals in such waste. ‘One challenge we have is the shredding of hard disk drives or other end-of-life materials, and creating an unnatural super mix of materials that are difficult to separate, even with chemical processes,’ Afiuny told Materials World. ‘Shredding materials and creating a mixture of materials that do not occur naturally in our environment versus thinking about smart separation creatively is something that needs to change.’ He explained that working on a focused extraction instead of a bulk recycling methodology was more effective.

‘Our breakthrough was that we took the e-waste from end-of-life applications and made magnets that were better than those which were commercially available. We mitigated them from end-of-life as we sourced them domestically, but we can also do it globally. We are not just harvesting the material, we are using it as a feedstock for manufacturing a finished product.’