Inductors are passive devices used in electronic circuits to store energy in the form of a magnetic field. They are the compliment of capacitors, which store energy in the form of an electric field. Inductors come in a variety of forms, but they each play an important role in the workings of electronic devices. They are available for high-power applications, noise suppression, radio frequency, signals, and isolation.

Coupled inductors share a magnetic path and influence each other. Coupled inductors are often used as transformers to step up or step down voltage, or to provide isolated feedback. They are also used in applications where mutual inductance is required.

Multilayer Chip Inductors:
Multilayer inductors get their name from the layers of coiled wire that are wound around a central core. Adding additional layers of coiled wire to an inductor increases the inductance, but it also increases the capacitance between the wires. These inductors trade off higher inductance for a lower maximum operating frequency.

Molded High Current Power Inductors:
Inductors that are molded into a plastic or ceramic housing are known as molded inductors. Generally, these inductors have a cylindrical or bar form factor, and they can be found with several types of winding options. Erocore provides Molded type high current power inductors which can be used for general & automotive application. Erocore MPF Series is directly cross to Coilcraft XAL Series which is flat wire coil that achieve ultra high current for next generation of power supply units. 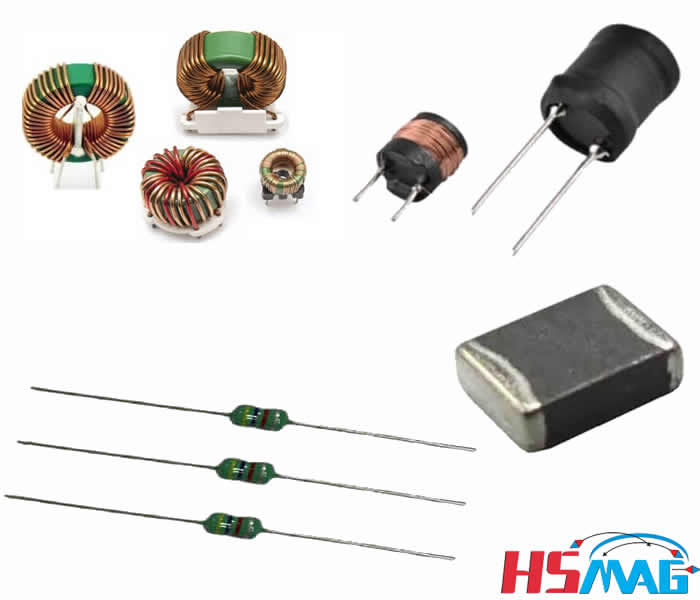 RF Inductors/Wirewound Inductors:
High-frequency inductors, also called radio frequency (RF) inductors, are designed to operate at high frequencies. These inductors often have a higher resistance and lower current rating. Most RF inductors have an air core rather than a ferrite or other inductance-boosting core material. This is because the increase in losses when those core materials are used reduce the operating frequency of the inductor.

Because of the operating frequency of the inductor, it’s important to mitigate against several sources of loss—whether it be from the skin effect, proximity effect, or parasitic capacitance. The skin and proximity effects effectively increase the resistance of an inductor. Several techniques reduce these losses, including honeycomb and spider web coils to reduce parasitic capacitance. Additionally, litz wires are often used to reduce the skin effect.

Axial Inductors/Color Ring Inductor:
Axial inductors can often be easily identified due to their color but can often be mistaken for resistors.To make this type of inductor a very thin copper wire is wrapped around a dumbbell-shaped ferrite core, and two lids are connected at the top and the bottom of the dumbbell core. After that it goes through a molding process (the green material surrounding the inductor) where the values are printed as colored bands, therefore we can determine the value of the inductor just by reading the color bands and comparing them with the color code chart just like a resistor. The main applications for Axial type inductors are Line Filter & Boost Converter and is able to provide high value of inductance.

Toroidal Core Inductor:
This form of inductor is wound on a toroid – a circular former. Ferrite is often used as the former as this increases the permeability of the core. The advantage of a toroid is that the toroid enables the magnetic flux to travel in a circle around the toroid and as a result the flux leakage is very low. The disadvantage with a toroidal inductor is that it requires a special winding machine is required to perform the manufacture as the wire has to be passed thought the toroid for each turn required. The main application of Toroidal Core Inductor is Medical Devices, Switching Regulators, Industrial Controllers & Output Filters(SMPS)