The International Thermonuclear Experimental Reactor (ITER) project said recently that the world’s strongest magnet has been manufactured for ten years and is ready to be shipped to France to assemble an “artificial sun” – a nuclear fusion power generation device. The installation is worth $23.95 billion and is being built in partnership with 35 countries, including China. 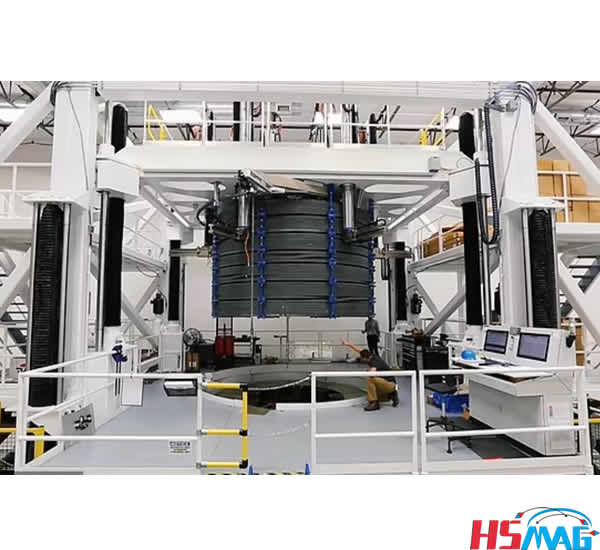 The world’s strongest magnet will be shipped to France

One of the 6 giant magnets in the core of ITER.

According to reports, the giant magnet called “the Central Solenoid” was built by General Atomics in California, USA. The new magnet is one of six magnets at the heart of ITER and is 14 feet in diameter. When the entire system is assembled, it will be 59 feet tall, 14 feet wide, and weigh about 1,000 tons.

A central solenoid of giant magnets will generate a powerful current in the ITER plasma, controlling the fusion reaction.

The assembled magnets are so powerful they can lift a 1,000-foot, 100,000-ton aircraft carrier as much as six feet off the ground. Such powerful magnets will form the core of ITER and will be used to induce powerful currents in the plasma of hydrogen fusion systems.

The ITER giant machine, which involves work and funding from the EU (including the UK and Switzerland), China, India, Japan, South Korea, Russia and the US, is 75% complete.

The ITER giant machine, which involves work and funding from the EU (including the UK and Switzerland), China, India, Japan, South Korea, Russia and the US, is 75% complete. The final large components will be installed between now and 2023, and the first plasma will be produced in 2025.

When these magnets and other components are assembled, they will form the ITER Tokamak, a “sun on Earth” that demonstrates nuclear fusion on an industrial scale. The central solenoid will generate a powerful current in the ITER plasma, helping to shape and control the fusion reaction during long pulses.

Schematic diagram of the hydrogen nuclear fusion power generation principle of the ITER project. It relies on deuterium as a fuel, and nuclear fusion produces no greenhouse gas emissions or long-lived radioactive waste.

If all goes well, by the mid-21st century, hydrogen fusion power plants will be able to contribute to the grid, producing 1,500 megawatts of electricity per day using just 1,000 grams of fuel. artificial sun magnet

The giant magnet, built by General Atomics, reportedly completed its final tests earlier this year, and it will now be loaded into a special heavy-duty haul truck for delivery to Houston. Once in Texas, it will be loaded onto a ship and sailed to the south of France.

According to General Atomics Engineering Director John Smith, the central solenoid will play a key role in ITER’s mission to establish fusion energy as a practical, safe and inexhaustible source of clean, abundant and carbon-free energy. source of electricity.

Smith said it was one of the largest, most complex and demanding magnet projects ever undertaken.

The technology would lead to the production of hydrogen nuclear fusion, which ITER says is an ideal method of generating electricity because it relies on deuterium as a fuel. Deuterium is readily available in seawater, and the only by-product is helium.

It is reported that nuclear fusion does not produce greenhouse gas emissions or long-term radioactive waste. The risk of an accident in a fusion plant is very limited, and once the containment vessel is lost, the fusion reaction stops.

Although ITER will not generate electricity, it will serve as a key test bed for the integrated technologies, materials and physical regimes required to commercially produce fusion power. artificial sun magnet

Lessons learned at ITER will be used to design the first generation of commercial fusion power plants, expected to come online in 2040 or 2050.