Byline: Brief overview of considerations for permanent magnets in electronics

Current technological updates have made devices become increasingly thin, which has put pressure on each industry involved to create components that utilize as little volume as possible. This poses a lot of challenges in magnetics due to manufacturing and the physics of permanent magnets. The largest concern for the magnets is demagnetization. It is surprisingly difficult to keep a permanent magnet magnetized if it is not designed with the intended circuit in mind. HS Magnetics is continuously exploring new possibilities of thin magnets in smart devices.

Three major components contribute to a magnet’s demagnetization: temperature, shape, and opposing external fields. All three boil down to stresses on the magnet that are fought by the magnet’s coercivity; the property that determines a magnet’s resistance to demagnetization. The higher the coercivity, the easier it will be to keep a magnet magnetized. We may not have a lot of control over a magnet’s temperature and opposing fields (the environment and circuit surround the magnet), but hopefully we can control its shape and pick a material grade to ensure we are in a safe operating region of coercivity. Typically, in electronics, the assumption is an environmental temperature of anywhere from 65 to 80 degrees Celsius. Normally there are not any opposing external fields, but if there is another magnet, electrical coil, or changing electric field nearby it is possible and can’t be overlooked. Occasionally the opposing field is there on purpose (electric motor, actuator, resonant or vibrating motor, transformer, charging coil). 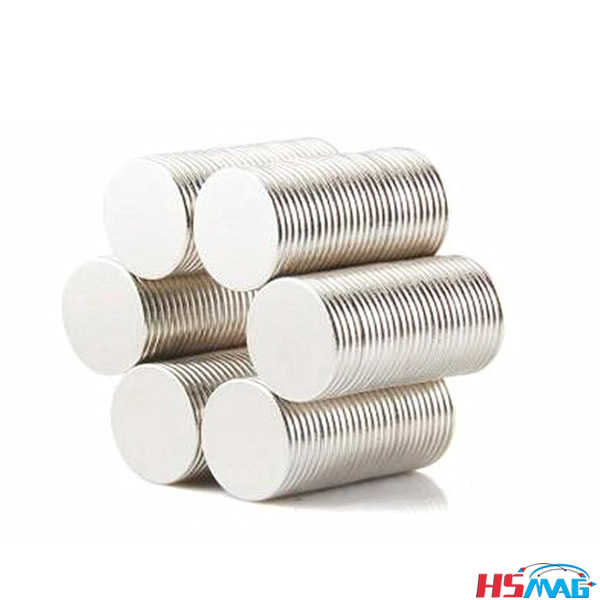 Once we’ve considered the temperature and opposing fields of the circuit, it is time to consider the magnet’s shape. Magnets operate on a curve much like a motor’s power or torque curve. The magnet is stronger in a better circuit, and weaker (and closer to demagnetization) in a poor circuit. We call the operating point in an open-air circuit with no opposing fields the magnet’s Permeance Coefficient (the average B/μH of the magnet), this lets us calculate the magnet’s internal opposing field. A magnet is always internally fighting itself to stay magnetized. We will skip the math details of the permeance coefficient (Pc or load-line), but it is heavily dependent on the pole-face area vs magnet thickness ratio (for an anisotropic magnet, magnets with a set axis of magnetization, such as sintered NdFeB (Neo magnets) or SmCo). The thinner the magnet without also shrinking the pole face significantly, will greatly decrease the Pc, leading to a weaker or demagnetized magnet.

In electronics, we typically see magnets that are sub-1mm in thickness but are many times larger in the other directions (creating a large pole face and thin magnet). This is the worst-case scenario for a magnet’s Pc. We must try to make the magnet as thick as possible (balancing with its pole face for the intended use case) to raise the Pc (raising the magnet’s strength somewhat, but greatly lowering its chance of demagnetization). We can determine these risks with easy calculations for simple shapes (see the Magnetic Calculator for some examples) and using FEA for more complex shapes and circuits. We can choose a material grade with a larger coercivity to counter some of this, but we cannot infinitely raise coercivity, it can only get us so far and this does increase cost and negatively impact strength (flux density). The shape and circuit of a magnet are of the utmost importance in permanent magnet design.

Some other considerations are the challenges of manufacturing small magnets. Sintered NdFeB (Neo magnets) are very brittle. They break easily with pressure, especially when they have a large surface area and thin cross section. NdFeB oxidizes easily, so it must be coated to prevent corrosion. To avoid the dog-boning effect of electro-plating on the edges of magnets, they are tumbled to radius the edges and provide a smooth coating transition. This tumbling in abrasive media is typically safe but can break the magnets easily when they are thin with a large area. It is also challenging to cut magnets that are very thin. Neo magnets are cut from a larger sintered block of material, but this challenge can often be overcome. Machining capabilities are much less of a consideration than demagnetization and magnetic performance due to physics constraints on coercivity and structure. Consider mechanical tolerances carefully on thin magnets. The difference in Pc of a 0.5mm magnet and a 0.4mm magnet are large!

One aspect often not considered in magnets of this size is the affect we are having on the surface of a magnet with different processes. These affects are negligible and can be safely ignored in magnets with a surface area to volume ratio that is small (most magnets). But once we start to produce magnets that are thin or very small compared to their surface area, there is not a lot of magnetic mass in the center that is untouched. A large magnet will act as expected if you do some damage to its surface area (a few tens of microns of damage), but if the magnet is only a few hundred microns thick there’s very little material inside unaffected. This would seem like an obvious conclusion, but the effects are amplified and often not considered as the volume of the magnet decreases. The surface area decreases much at a much lower rate than the volume when a magnet gets thinner. This damage comes from several sources, we will briefly cover the largest considerations. Abrasive machining damages the outside of the magnet, often breaking its crystal structure leading to low flux output or low coercivity (easier to demagnetize the surface). De-oxidation (acid baths) before plating can remove some of the intergranular material that give these crystals additional coercivity. Finally, the coating itself is not part of the magnet. At best, it increases the airgap of the magnet and decreases the useful magnetic volume. For example, a 0.5mm thick magnet with a 10 micron coating will only have 0.48mm (there’s coating on both sides) of useful magnet (some of which is damaged by the other processes) and anything the magnet is attracting is by default 0.01mm further away because of the coating thickness. Distance has a very large effect on magnetic performance. The coating could also be ferromagnetic itself (in the case of nickel coatings) that carries flux away from your intended circuit and gives it a path to the other side of the magnet (effectively increasing leakage of the magnetic circuit).

It can be seen from this brief overview that there are many considerations in thin magnets that might get overlooked by a typical magnet designer or engineer, without even going into the large effects of the rest of the magnetic circuit and intended function. HS Magnetics ensures to enlist magnetic engineers who specialize in thin, mass producible designs with a broad range of experience in electronics and its associated magnetic physics; in the early design phase this can help to avoid these pitfalls before the sampling stage is even reached. Contact us and let us know how we can help in your products.