Neodymium Magnet Wind Turbines – According to research organized by a group of UK scientists, it is predicted that 15% of the country’s energy requirements in the year 2020 are expected to come from renewable energy sources. They have also considered the wind farms that are popping in every corner of the country to come into this conclusion. These reports have created several contradictions among people as well. There is much debate on the efficiency of using wind turbines to cater the energy requirements. However, experts say that there is nothing much to worry about since this is totally a clean energy source.

These contradictions have forced the scientists to analyze all the aspects of using wind turbines, from cradle to grave. They include the manufacturing process of wind turbines, subsequent installation, maintenance process, and operation. At the end of the day, the wind turbines are stripped down into waste material and the scientists have also analyzed their impact on the environment after that. To summarize these reports, an environmental benefit has been identified by starting and running wind farms. However, the biggest environmental impact has been identified as coming from the foundation. 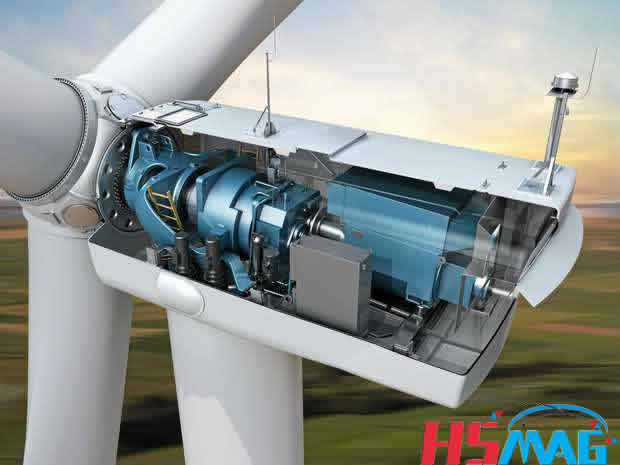 Neodymium permanent magnet is known as the third generation rare earth permanent magnet, which has the highest magnetic properties so far. The main phase of sintered Nd2Fe14B alloy is intermetallic compound Nd2Fe14B, and its saturated magnetic polarization (Js) is 1.6T < 1 >. Because sintered Nd2Fe14B permanent magnet alloy is composed of main phase Nd2Fe14B and grain boundary phase, and the grain orientation of Nd2Fe14B is limited by technological conditions, the maximum remanence of the magnet can reach 1.5T at present. Vacuum Schmelze GmbH produces NdFeB magnets with a maximum magnetic energy product (BH) max of 57 MGOe.

When designing permanent magnet motors, high-grade NdFeB is often chosen to obtain high air gap magnetic density. When the motor is running, neodymium magnets with high coercivity are required because of the existence of alternating demagnetizing field and the demagnetizing effect of instantaneous high current when the load suddenly changes.

The process of extracting neodymium is creating a big hassle on the environment. The workers use huge amounts of acid in order to extract neodymium from other materials. This has resulted in unusable groundwater in the inner part of Mongolia. Apart from that, a large percentage of energy is wasted inside the turbines when the kinetic energy of wind power is converted into electricity. In the long run, they are beneficial for the environment since it is a green energy source. The emission of carbon from fossil fuel burning creates a variety of toxins that are harmful to the environment that results in global warming. However, wind turbines do not create such a big impact on the environment.

The price of neodymium is perfectly affordable, which has played a major role in the usage of it in the industrial applications. Neodymium magnet is usually found in bastnasite and in monazite. Pure neodymium can easily be extracted from these compounds under a very low cost. The acids that require in the process have also supported the above-mentioned fact. This has helped the manufacturers to create wind turbines at affordable prices and produce inexpensive and potentially environmental harmless energy.

NdFeB alloys contain active rare earth elements, which are easy to oxidize and rust. In application, Nd-Fe-B should be treated as surface corrosion protection unless Nd-Fe-B is encapsulated and isolated from air and water. Common anticorrosive coatings are nickel plating, zinc plating, and electrophoretic epoxy resin. Surface phosphating treatment can prevent NdFeB from rusting in a relatively dry environment for a short time.

Rare earth intermetallics can react with hydrogen under certain pressure and temperature. When NdFeB absorbs hydrogen, it emits heat and breaks up. Hydrogen breakage in Nd-Fe-B production process takes advantage of this characteristic.