Flexible electronic devices have the advantages of flexibility, easy portability, and potential low-cost manufacturing. They have important application prospects in medical, information, and energy fields, and have attracted widespread attention. The most ideal flexible electronic devices, such as flexible wearable devices, require all components to be flexible, including flexible power sources, flexible circuits, flexible displays, flexible sensing, and flexible storage. It can be seen that how to realize the flexibility of traditional functional materials, understand the evolution law of material functional properties under stress/strain environment, and master the methods to control the functions of materials and devices under multiple physical fields have become very important issues. On the other hand, magnetic materials are an important part of electronic devices. The preparation of magnetic thin films on flexible substrates and the study of their magnetoelectric properties are an important basis for the development of flexible magnetoelectronic/spintronic devices. The Magnetoelectronic Materials and Devices team of the Key Laboratory of Magnetic Materials and Devices, Chinese Academy of Sciences (Ningbo Institute of Materials Technology and Engineering, Chinese Academy of Sciences) has been conducting research on flexible magnetoelectric functional materials and devices in recent years, including the development of flexible magnetoelectric functional materials. technology to study the evolution and regulation of physical properties of magnetoelectric functional materials and devices under the action of multiple physical fields (in a flexible state). In the past two years, a series of progress has been made in the regulation of magnetic anisotropy and magnetic moment orientation.

Magnetic anisotropy is one of the important intrinsic parameters of magnetic materials, which not only determines the magnetic moment orientation and coercive force of magnetic materials, but also affects the operating frequency and even power consumption of magnetic devices. How to control magnetic anisotropy and its control mechanism has always been one of the core issues in magnetic materials and magnetic physics. The team prepared magnetostrictive films on flexible substrates, and studied the regulation of stress/strain on magnetic anisotropy and exchange bias effects in magnetostrictive films (CoFeB, FeGa, etc.). It is found that the magnetic anisotropy of the magnetostrictive film can be regulated by applying stress, and the hard axis and the easy axis can be interchanged under certain stress conditions. For films with positive magnetostriction coefficients, the easy axis of magnetization tends to be in the direction of tensile stress, and the axis of hard magnetization tends to be in the direction of compressive stress. (Figure 1) [Appl. Phys. Lett. 100, 122407 (2012); Appl. Phys. Lett. 105, 103504 (2014)]. In flexible FaGa/IrMn magnetic exchange-biased bilayers, it is found that the exchange bias field of the heterojunction decreases with the increase of the applied stress/strain, while the coercive force increases with the applied stress/strain. while increasing [Appl. Phys. Lett. 102, 022412 (2013)]. This result indicates that the magnetic moment directions of the ferromagnetic layer and the antiferromagnetic layer do not respond to applied stress/strain, which leads to the weakening of the pinning effect of the antiferromagnetic layer on the ferromagnetic layer and the reduction of the magnitude of the exchange bias field. The above research results not only help people understand the magnetic anisotropy of flexible magnetic films, but also lay the foundation for the development of flexible spin valves and magnetic tunnel junctions and other devices, and more importantly, provide new ideas for regulating the magnetic anisotropy of materials.

Magnetic anisotropy usually decreases with increasing temperature, resulting in insufficient thermal stability of some magnetic devices, and some applications closely related to magnetic anisotropy are greatly limited. In response to this problem, on the basis of the above work, the team cleverly used the thermal properties of PVDF’s own anisotropic thermal expansion and the inverse magnetostrictive effect to successfully design a class of magnetic composites with positive temperature coefficient magnetic anisotropy film material. By systematically studying the temperature-dependent hysteresis loops and ferromagnetic resonance spectra of different composite films of CoFeB/PVDF, FeGa/PVDF and Ni/PVDF, it is confirmed that the magnetic anisotropy of PVDF-based magnetic composite films has a positive temperature coefficient, that is, the As the temperature increases, the effect of magnetic anisotropy increases (Fig. 2). The results of this study have important implications for improving the thermal stability of magnetic materials [Sci. Rep. 4, 6615 (2014)]. At the same time, the team also utilized the ferroelectricity and anisotropic thermal expansion properties of PVDF to realize the effective regulation of magnetic anisotropy and magnetization direction by multi-physics fields. For example, in the FeGa/PVDF heterostructure, the easy-to-easy-axis conversion of FeGa magnetic anisotropy is achieved by applying an electric field at 295K (Fig. 3), and with the assistance of a small magnetic field (less than the coercive force), the Temperature controls the 180o reversal of the magnetic moment. It can be seen that the PVDF-based flexible magnetic composite thin film material has the freedom of multi-field regulation of temperature, electric field, and magnetic field, and has potential application value in the field of flexible spintronic devices [Sci. Rep. 4, 6925 (2014)]. 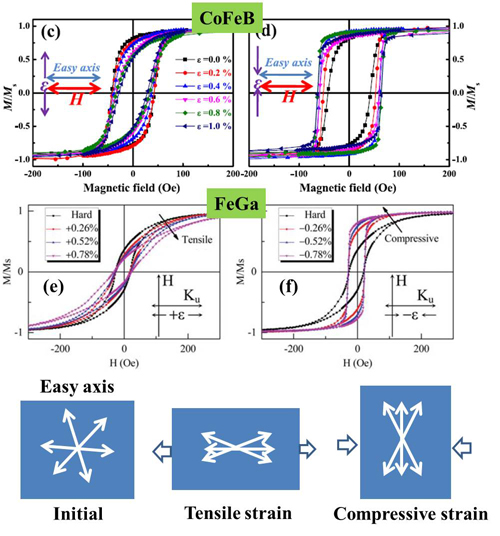 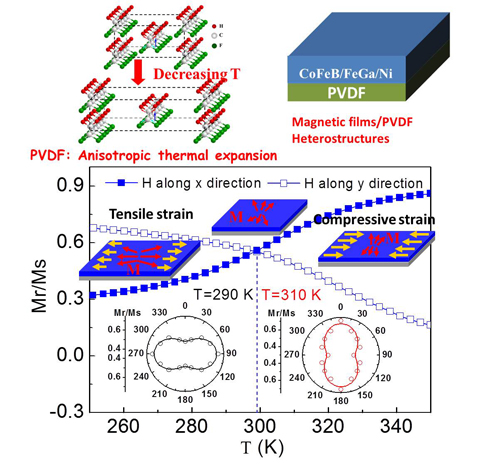 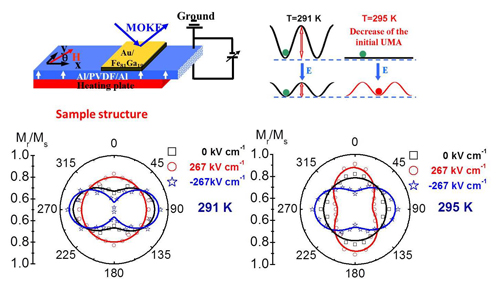