1. Chip inductor: Inductive components and EMI filter components are widely used in the PCB circuit of electronic equipment. These components include chip inductors and chip beads. The characteristics of these two devices are described below and analyzed for their general application and special applications. The benefits of surface mount components are small package sizes and the ability to meet real space requirements. In addition to impedance values, current carrying capabilities, and other similar physical characteristics, the other performance characteristics of through-hole connectors and surface mount devices are essentially the same. Where chip inductors are required, the inductor is required to implement two basic functions: circuit resonance and choke reactance. The resonant circuit includes a resonance generating circuit, an oscillating circuit, a clock circuit, a pulse circuit, a waveform generating circuit, and the like. The resonant circuit also includes a high Q band pass filter circuit. To make the circuit resonate, both the capacitor and the inductor must exist in the circuit. There is parasitic capacitance at both ends of the inductor due to the fact that the ferrite body between the two electrodes of the device is equivalent to a capacitive medium. In the resonant circuit, the inductor must have high Q, narrow inductance deviation, stable temperature coefficient, in order to achieve the narrow band of the resonant circuit, low frequency temperature drift requirements. High Q circuits have sharp resonant peaks. The narrow inductor bias ensures that the resonant frequency deviation is as small as possible. The stable temperature coefficient ensures that the resonant frequency has stable temperature variation characteristics. The difference between the standard radial lead-out inductor and the axial lead-out inductor and the chip inductor is only that the package is different. The inductive structure includes a coil wound on a dielectric material (typically an alumina ceramic material), or an air-core coil and a coil wound on a ferromagnetic material. In power applications, when used as a choke, the main parameters of the inductor are DC resistance (DCR), rated current, and low Q. When used as a filter, a wide bandwidth characteristic is desired, and therefore, a high Q characteristic of the inductor is not required. A low DCR guarantees a minimum voltage drop, and DCR is defined as the DC resistance of the component without an AC signal. The Difference Between Magnetic Beads and Inductors 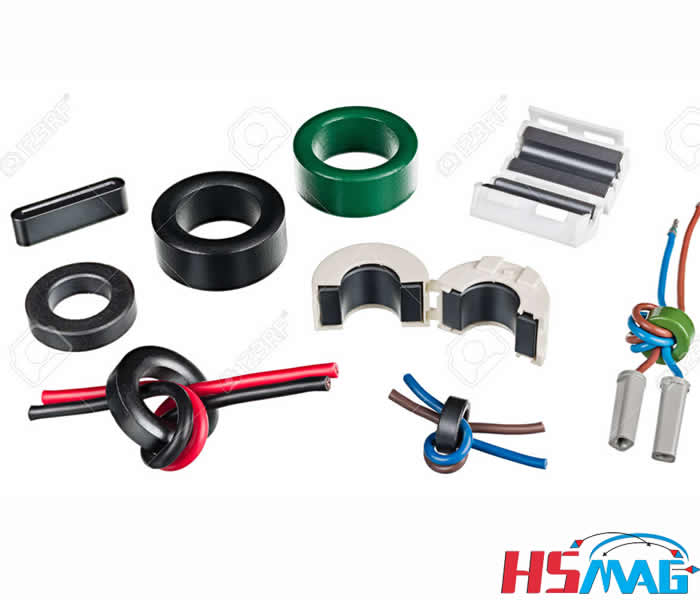 2. Chip type magnetic beads: The function of the chip type magnetic beads is mainly to eliminate the RF noise existing in the transmission line structure (PCB circuit). The RF energy is an AC sine wave component superimposed on the DC transmission level, and the DC component is required. Useful signals, while RF RF energy is unwanted electromagnetic interference along the line transmission and radiation (EMI). To eliminate these unwanted signal energies, use a chip bead to act as a high frequency resistor (attenuator) that allows the DC signal to pass through and filter out the AC signal. Usually the high frequency signal is above 30 MHz, however, the low frequency signal is also affected by the chip bead. The chip magnetic beads are composed of a soft ferrite material and constitute a monolithic structure with a high volume resistivity. The eddy current loss is inversely proportional to the resistivity of the ferrite material. The eddy current loss is proportional to the square of the signal frequency. Benefits of using chip beads: Miniaturization and lightweight. High impedance in the RF noise frequency range eliminates electromagnetic interference in the transmission line. Close the magnetic circuit structure to better eliminate the crosstalk of the signal. Excellent magnetic shielding structure. Reduce the DC resistance to avoid excessive attenuation of the wanted signal. Significant high frequency and impedance characteristics (better elimination of RF energy). Parasitic oscillations are eliminated in the high frequency amplifying circuit. Effective operation ranges from a few MHz to a few hundred MHz. To properly select a bead, you must be aware of the following:

What is the frequency range of the unwanted signal? Who is the noise source? How much noise attenuation is needed. What are the environmental conditions (temperature, DC voltage, structural strength). What is the circuit and load impedance? Is there room to place magnetic beads on the PCB? The first three can be judged by observing the impedance frequency curve provided by the manufacturer. All three curves in the impedance curve are very important, namely resistance, inductive reactance and total impedance. The total impedance is described by ZR22πfL()2+:=fL. A typical impedance curve can be found in the DATASHEET of the bead. From this curve, select the type of bead that has the largest impedance in the frequency range where attenuation is desired and the signal attenuation is as small as possible at low frequencies and DC. The impedance of the chip bead will be affected by the excessive DC voltage. In addition, if the operating temperature rises too high or the external magnetic field is too large, the impedance of the bead will be adversely affected. Reasons for using chip beads and chip inductors: Whether to use chip beads or chip inductors is mainly in applications. A chip inductor is required in the resonant circuit. The use of chip beads is the best choice when eliminating unwanted EMI noise. Application of Chip Beads and Chip Inductors: Chip Inductors: Radio Frequency (RF) and Wireless Communications, Information Technology Equipment, Radar Detectors, Automotive Electronics, Cellular Phones, Pagers, Audio Equipment, PDAs (Personal Digital Assistants), Wireless remote control system and low voltage power supply module. Chip Beads: Clock generation circuit, filtering between analog circuit and digital circuit, I/O input/output internal connector (such as serial port, parallel port, keyboard, mouse, long distance telecommunication, local area network), radio frequency (RF) circuit Between high-frequency conducted interference in the power supply circuit and EMI noise suppression in computers, printers, video recorders (VCRS), television systems, and mobile phones, and interference-prone logic devices. Magnetic Beads and Inductors