Placing it a strong magnetic field in a north-south direction
Holding it in a north-south direction and repeatedly striking it with a hammer, physically jarring the domains into a weak alignment
Passing an electrical current through it
Two of these methods are among scientific theories about how lodestone forms in nature. Some scientists speculate magnetite becomes magnetic when struck by lightning. Others theorize that pieces of magnetite became magnets when Earth was first formed. The domains aligned with Earth’s magnetic field while iron oxide was molten and flexible. 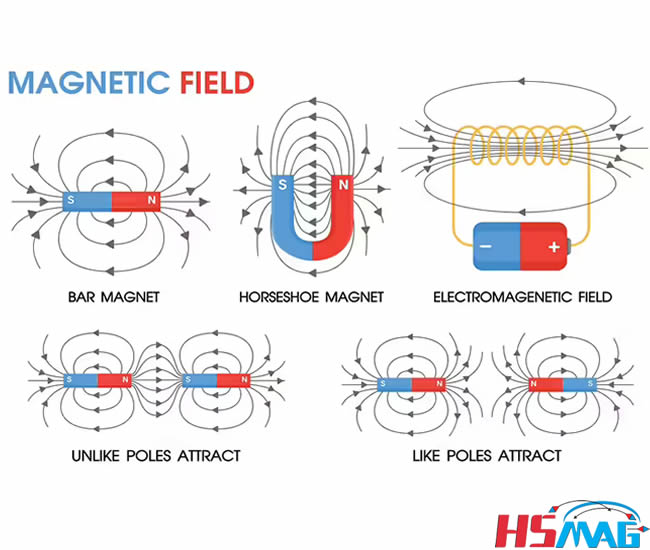 The most common method of making magnets today involves placing metal in a magnetic field. The field exerts torque on the material, encouraging the domains to align. There’s a slight delay, known as hysteresis, between the application of the field and the change in domains; it takes a few moments for the domains to start to move. Here’s what happens:

The magnetic domains rotate, allowing them to line up along the north-south lines of the magnetic field.
Domains that already pointed in the north-south direction become bigger as the domains around them get smaller.
Domain walls, or borders between the neighboring domains, physically move to accommodate domain growth. In a strong magnetic field, some walls disappear entirely.
The resulting magnet’s strength depends on the amount of force used to move the domains. Its permanence, or retentivity, depends on how difficult it was to encourage the domains to align. Materials that are hard to magnetize generally retain their magnetism for longer periods, while materials that are easy to magnetize often revert to their original nonmagnetic state.

You can reduce a magnet’s strength or demagnetize it entirely by exposing it to a magnetic field that is aligned in the opposite direction. You can also demagnetize a material by heating it above its Curie point, or the temperature at which an object’s magnetic properties change. The heat distorts the material and excites the magnetic particles, causing the domains to fall out of alignment.

Shipping Magnets
Large, powerful magnets have numerous industrial uses, from writing data to inducing current in wires. But shipping and installing huge magnets can be difficult and dangerous. Not only can magnets damage other items in transit, they can be difficult or impossible to install upon their arrival. In addition, magnets tend to collect an array of ferromagnetic debris, which is hard to remove and can even be dangerous. For this reason, facilities that use very large magnets often have equipment on-site that lets them turn ferromagnetic materials into magnets. Often, the device is essentially an electromagnet.

Metal Magnetic Mounting for Flashlight on the Barrel