The historical development of permanent magnet materials based on their magnetic performance ((BH)max) is shown schematically in Figure 1. Of the many permanent magnet materials, four are still in common use: alnico, ferrite, samarium cobalt (SmCo), and neodymium iron boron (NdFeB). Alnico was invented and commercialized in the early 1940s. Ferrite magnets, also known as ceramic magnets, were first commercialized in 1952. SmCo5 was introduced in 1961 and an improved composition, based on Sm2Co17, was introduced in the early 1970s. The most recently developed material is NdFeB and was first available in 1984. Both the SmCo and NdFeB based materials belong to the family of rare earth magnets. Ferrite magnets, while providing less magnetic strength than rare earth magnets, cost far less. Therefore, they are still widely used wherever product cost is a major consideration over magnetic performance. 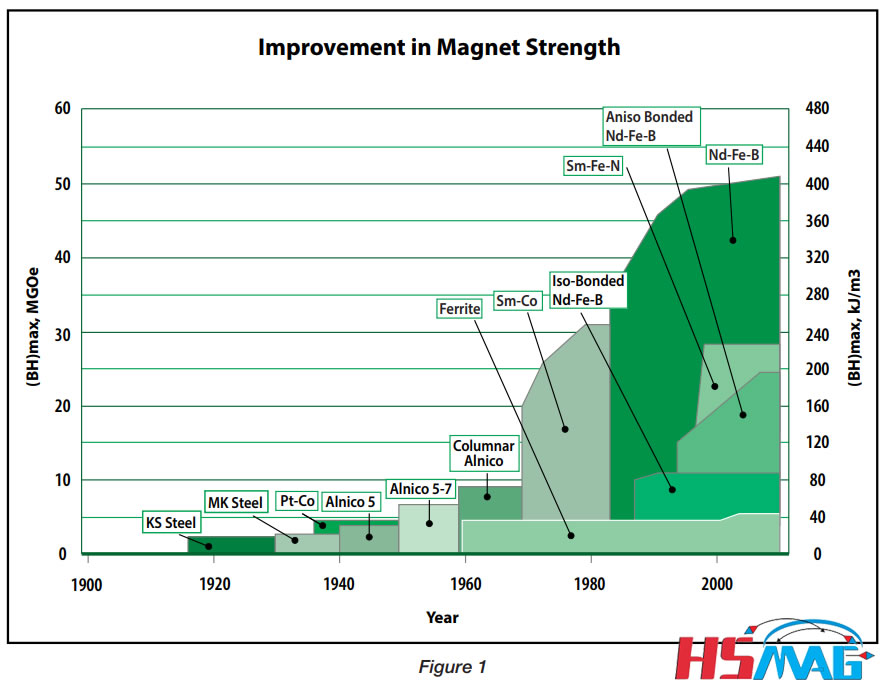 Today magnetic sensors are vital devices in many applications and industry segments. Their primary function is to interact with a magnetic field and convert mechanical motion or position
to an electrical signal. They operate contactlessly with no physical wear or tear and can work through sealed barriers with high reliability. Most magnetic sensors use on of the following
operating principles:

The role of the permanent magnet in a sensor is to provide a magnetic field in an air gap; the field can be constant and extremely precise, or vary in magnitude and direction.
In the permanent magnet industry the magnetic parameter, (BH)max, is considered to be the best all-round single indicator of permanent magnet performance and is always included in any list of
published magnetic properties. It can be shown from first principals that for a magnetic circuit the energy stored in the field in the air gap is directly proportional to the product of flux density (B) and corresponding field strength (H) at any point on the second quadrant demagnetization normal curve; the product BH is known as the energy product as shown in Figure 2 below. 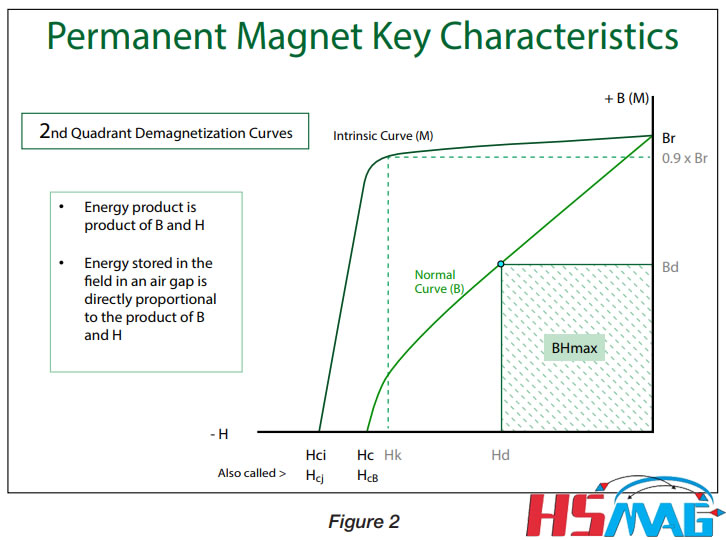 Hence, it follows that the volume of a magnet required to produce a given field in a given gap is minimum when the product of BH is maximum; (BH)max. In other words the higher the (BH)max should be the smaller the magnet volume to generate a given flux density.
Modern permanent magnet materials are very versatile and offer a wide range of characteristics to meet a myriad of application requirements.

The most common types of permanent magnets used in sensors are sintered samarium cobalt, sintered Neodymium Iron Boron and bonded magnets of various types. These are described in more detail below:

The first generation of commercial rare earth permanent magnets, based on Samarium Cobalt intermetallic compounds, were introduced in the early 1970s. Shortly after the development of SmCo5 permanent magnets, alloys containing copper as well as the rare earths and cobalt emerged. These became known as the precipitation-hardened family of R (Cu, Co) alloys and eventually led to the development of high-energy Sm (Co, Cu, Fe, TM) 7-8 magnets (where TM is Zr, Ti or Hf).Magnetic Sensors Permanent magnets
Magnets based on Sm and Co offer the combination of highest operating temperature, flux output and thermal stability.

In the early 1980s both Sumitomo Special Metals and General Motors announced a new class of magnetic material based on the ternary compound Nd2Fe14B. Soon after the announcement several permanent magnet manufacturers began commercial production of permanent magnets based on Nd2Fe14B. These materials combine high HcJ, with the highest known BHmax of any commercially available magnet. The powders produced by the GM process, known as Magnequench, are magnetically isotropic and primarily used in unoriented bonded magnets.
NdFeB based magnets have two major advantages when compared to SmCo based magnets.Magnetic Sensors Permanent magnets
These offer a combination of lower costs, primarily driven by lower raw materials, and higher room temperature Br and BHmax performance.
The major disadvantages of NdFeB magnets are their relatively low maximum operating temperatures and poor corrosion resistance. Increases in operating temperature are primarily addressed by increasing the intrinsic coercivity by substitution of Dy for Nd. Corrosion resistance is addressed by coating the magnets.

Bonded magnets are an important but often overlooked group of products that magnetic circuit and device designers should consider when choosing the optimum permanent magnet type
for their specific application need. In their most basic form bonded magnets consist of two components; a hard magnetic powder and a non-magnetic polymer or rubber binder. The powder may
be hard ferrite, NdFeB, SmCo, alnico, or mixtures of two or more magnetic powders known as hybrids. In all cases, the powder properties are optimized through processing and chemistry specifically aimed at utilization in a bonded magnet. The binder that holds the magnetic particles in place can produce either a flexible or rigid magnet. Typical binders for flexible magnets are nitrile rubber and vinyl. Binders for rigid magnets include nylon, PPS, polyester, Teflon, and thermoset epoxies. The thermoplastic binders may be formed into sheet via a calendaring or extrusion process or formed into various complex shapes using injection molding. Compression bonding almost exclusively combines isotropic NdFeB powders with a thermoset epoxy binder using a uniaxial room temperature pressing process. A major advantage of bonded magnet processing is near net shape manufacturing requiring zero or minimal finishing operations compared to powder or cast metallurgical processes. In addition value added assemblies can be economically produced in a single operation.

HSMAG recently introduced a new high energy grade of bonded magnet to their range of permanent magnet offerings. The new grade, B12, has a typical maximum energy product, (BH)max, of over 11 MGOe compared to the previous generation of 9 MGOe.
The (BH)max of a bonded magnet is determined by the density and the volume fraction of the magnetic material phase present in the magnet body. By optimizing the particle morphology, particle size distribution, encapsulation chemistry and process, and pressing conditions, HSMAG’s engineers have achieved a breakthrough in performance. These improvements have enabled product densities of 6.3 g/cm2 to be achieved under production conditions. B12 products provided magnetic circuit designers a 9% improvement in flux density allowing miniaturization of the device packages and increased air gap energy densities.
When the operating temperatures exceed around 450 C or extremely high thermal stability is required AlNiCo magnets are the material of choice.
Conversely, if weight and volume are not critical and cost is paramount hard ferrite magnets are an option.

The most effective tool for optimizing the application of permanent magnets is the use of 2D & 3D computer modeling software. Magnet Applications, Inc. have the ability to measure not
only magnetostatic performance, but also eddy currents when speed of motion could be a factor. The design process begins with a magnet geometry defined by mechanical constraints of the application and experience. The solution is post-processed to provide both graphical as well as numerical results (see Figure 3).

In order to meet the challenging requirements of modern sensor applications, HSMAG can provided a full range of materials covering numerous product geometries, grades and processing options. Product quality is achieved by use of a Quality Management Systems and applying the principles of defect prevention through all process steps leading to guaranteed PPM Quality levels.Magnetic Sensors Permanent magnets