What are Temperature Coefficients of Permanent Magnets? 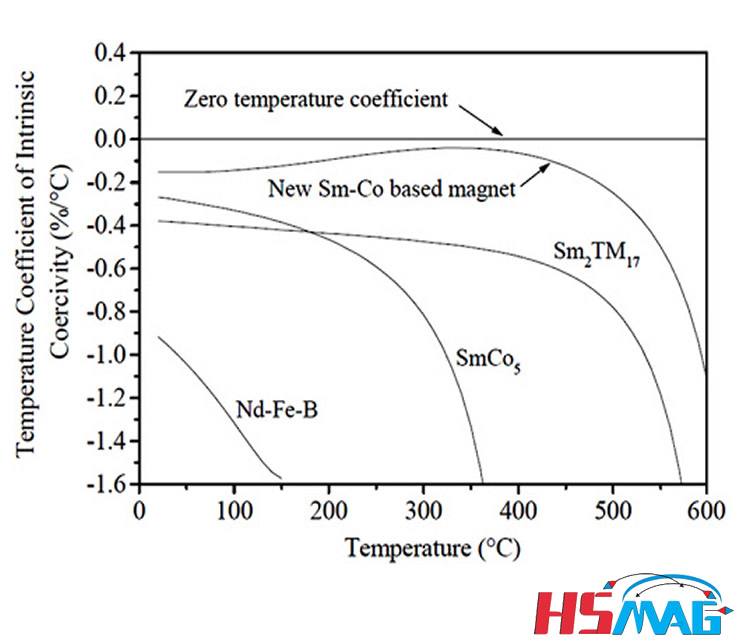 Key Magnetic Properties
• Br, Remanent Induction – indicates available flux output from the magnet
• Hci (or HcJ), Intrinsic Coercivity – indicates the magnet’s resistance to de-magnetization
• BHmax, Maximum Energy Product – a figure of merit for how much energy is available for motors and generators
• Hk, Hx or Hk/Hci – Value in Oersteds (kA/m) that indicates the loop squareness
• Reversible Temperature Coefficients (Br and Hci) –indicate how these magnetic characteristics change with temperature

• The first characteristic specified for motor applications is usually the energy productas that directly affects device size and performance.
• Secondly, the intrinsic coercivity is specified to be high enough to survive bothelevated temperature and demagnetizing stress.
• These key properties are used most often to gauge magnetic “quality”.
• The Reversible Temperature Coefficients manifest themselves in the modifiedhysteresis loop away from room temperature.

Permanent magnet blocks of NdFeB have a relatively high maximum energy product. Because of its relatively low Curie temperature, however, NdFeB has a large temperature coefficient for its residual induction. The temperature coefficients of the relative magnetic fields (AB/B)/AT in the air gap of NdFeB dipole magnets were reduced from -1.1 x 10″3/°C to less than 2 x 10″5/°C under operating temperatures of ± 6’C. This was achieved
passively by using 1.25-mm-thick strips of 30%-Ni-Fe alloy as flux shunts for the NdFeB blocks. The magnets with soft-steel poles and flux-return yokes were assembled and measured in a temperature-controlled environment.
1 INTRODUCTION
Stable permanent magnets could be used for chargedbeam storage rings and for other new magnetic devices which require system reliability and lower construction and operation costs. One drawback of permanent magnets for these types of applications, however, is maintaining
the required magnetic field when the residual induction and coersive forces change due to the ambient temperature variation.
The bulk magnetization of a permanent magnet is the result of a collective alignment of atomic spins within magnetic domains. As the temperature increases, thermal fluctuations induce random variations in individual atomic spin orientations. At Curie temperature Tc. all the spins are randomly oriented and the bulk magnetization disappears. Therefore, at ambient temperature, a permanent magnet. h higher Tc has a lower temperature
coefficient for the variation of the magnetization. Permanent magnet blocks of neodymium-iron-boron (NdFeB) have relatively high maximum energy-product in the demagnetizing quadrant compared to other permanent
magnets such as Alnico, ferrite. and rare-earth cobalt [1].
Because of its relatively low Curie temperature of approximately 300°C, NdFeB has a high temperature coefficient for its residual induction.
The purpose of this work is to reduce the temperature coefficient of the magnetic fields of NdFeB permanent magnets better than 10 /°C within the range of an operation temperature using parallel flux-shunts. At lower temperatures the shunt permeability increases, enabling the shunt to carry or divert more flux from the air e^.p of the magnet. At higher temperatures, the reverse ccidithn exists: the shunt permeability decreases and less air-gapflux is diverted. In order to have higher temperaturesensitivity, the shunt material should have a Curie pointclose to ambient temperature. Shunt materials made ofCurie alloys (30-32% Ni-Fe) and Montel alloys (67% NiCu-Fe) have relatively low Curie temperatures of less than 100°C. Temperature compensations for ferrite permanentmagnets have been extensively studied at Fermilab for useat relatively low magnetic field [2],
(a)I Steel
[ Compensation Stripsj NbFeB Magnet
Figure 1: (a) Symmetrical cross section of a quadrant of adipole magnet with a soft-steel pole and flux-return yoke.
The NdFeB block is magnetized in the vertical direction,
(b) Top view for the arrangement of the permanentmagnet blocks and the temperature compensation stripsinserted between the blocks.
2 TEMPERATURE COMPENSATION
The symmetrical cross section of a quadrant of a typicaldipole magnet used for this study is shown in Fig. 1. Themajor components of the magnets are NdFeB permanentmagnet blocks, magnetic flux shunts for temperaturecompensation, flux-return yokes, and soft-steel poles forfield-shaping. The NdFeB blocks have a cross section of?.5.4 x 25.4 and a thickness in the magnetized direction of