The ⚡ starter motor ⚡ requires large amounts of current (up to 300 amperes) to generate the torque needed to turn the engine. The conductors used to carry this amount of current (battery cables) must be large enough to handle the current with very little voltage drop. It would be impractical to place a conductor of this size into the wiring harness to the ignition switch. To provide control of the high current, all starting systems contain some type of magnetic switch. There are two basic types of magnetic switches used: the solenoid and the relay.

Starter-Mounted Solenoids. A solenoid is an electromagnetic device that uses the movement of a plunger to exert a pulling or holding force. In the solenoid-actuated starter system, the solenoid is mounted directly on top of the ⚡ starter motor ⚡. The solenoid switch on a starter motor performs two functions: It closes the circuit between the battery and the starter motor. Then it shifts the starter motor pinion gear into mesh with the ring gear. This is accomplished by a linkage between the solenoid plunger and the shift lever on the starter motor. In the past, the most common method of energizing the solenoid was directly from the battery through the ignition switch. However, most of today’s vehicles use a starter relay in conjunction with a solenoid. The relay is used to reduce the amount of current flow through the ignition switch and is usually controlled by the powertrain control module (PCM). This system will be discussed later in this chapter.

Because the contact disc does not close the circuit from the battery to the starter motor until the plunger has moved the shift lever, the pinion gear is in full mesh with the flywheel before the armature starts to rotate.

After the engine is started, releasing the key to the RUN position opens the control circuit. Voltage no longer is supplied to the hold-in windings, and the return spring causes the plunger to return to its neutral position. 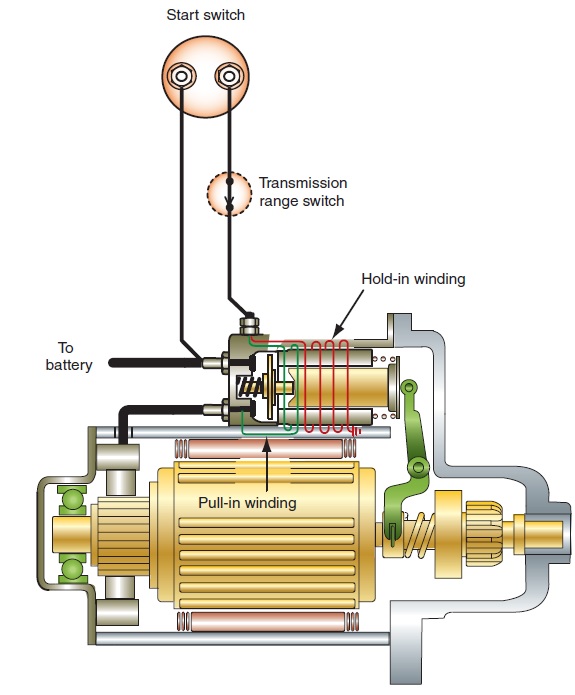 A common problem with the control circuit is that low system voltage or an open in the hold-in windings will cause an oscillating action to occur. The combination of the pull-in winding and the hold-in winding is sufficient to move the plunger. However, once the contacts are closed, there is insufficient magnetic force to hold the plunger in place. This condition is recognizable by a series of clicks when the ignition switch is turned to the START position. Before replacing the solenoid, check the battery condition; a low battery charge will cause the same symptom.

Remote Solenoids. Some manufacturers use a starter solenoid that is mounted near the battery on the fender well or radiator support. Unlike the starter-mounted solenoid, the remote solenoid does not move the pinion gear into mesh with the flywheel ring gear.

When the ignition switch is turned to the START position, current is supplied through the switch to the solenoid windings. The windings produce a magnetic field that pulls the moveable core into contact with the internal contacts of the battery and starter terminals. With the contacts closed, full battery current is supplied to the starter motor.

A secondary function of the starter relay is to provide for an alternate path for current to the ignition coil during cranking. This is done by an internal connection that is energized by the relay core when it completes the circuit between the battery and the starter motor. 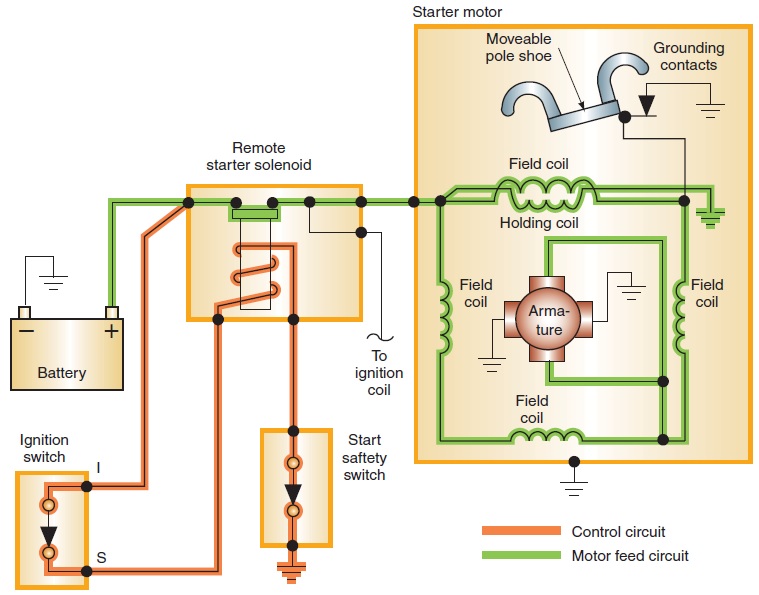 Most modern vehicles will use a starter relay in conjunction with a starter motor-mounted solenoid to control starter motor operation. The relay can be controlled through the ignition switch or by the powertrain control module (PCM).

In a system that uses the ignition switch to control the relay, the switch will usually be installed on the insulated side of the relay control circuit. When the ignition switch is turned to the START position, battery voltage is applied to the coil of the relay. Since the relay coil is grounded, the coil is energized and pulls the contacts closed. With the contacts closed, battery voltage is applied to the control side of the starter solenoid. The solenoid operates in the same manner as discussed previously.

In this type of system, a very small wire can be used through the steering column to the ignition switch. This reduces the size of the wiring harness.

In a PCM-controlled system, the PCM will monitor the ignition switch position to determine if the starter motor should be energized. System operation differs among manufacturers. However, in most systems, the PCM will control the starter relay coil ground circuit. Control by the PCM allows the manufacturer to install software commands such as double start override, which prevents the starter motor from being energized if the engine is already running, and sentry key within the PCM.

The ignition switch is the power distribution point for most of the vehicle’s primary electrical systems. Most ignition switches have five positions:

The ignition switch is spring loaded in the START position. This momentary contact automatically moves the contacts to the RUN position when the driver releases the key. All other ignition switch positions are detent positions.

Many manufacturers have moved away from the use of ganged ignition switches with their numerous wires to a multiplexed switch. The multiplex switch reduces the wires required to determine switch position down to two. The control module then uses a high-side driver to provide other modules their switched battery voltage on the RUN/START circuit. Since the ignition switch is used only as an input, there is no high current flow through the switch and the wire size can be reduced.

Vehicles equipped with automatic transmissions require a means of preventing the engine from starting while the transmission is in gear. Without this feature, the vehicle would lunge forward or backward once it was started, causing personal injury or property damage. The normally open neutral safety switch is connected in series in the starting system control circuit and is usually operated by the shift lever. When in the PARK or NEUTRAL position, the switch is closed, allowing current to flow to the starter circuit. If the transmission is in a gear position, the switch is opened and current cannot flow to the starter circuit.

Many vehicles equipped with manual transmissions use a similar type of safety switch. The startclutch interlock switch is usually operated by movement of the clutch pedal. When the clutch pedal is pushed downward, the switch closes and current can flow through the starter circuit. If the clutch pedal is left up, the switch is open and current cannot flow. Some vehicles use a mechanical linkage that blocks movement of the ignition switch cylinder unless the transmission is in PARK or NEUTRAL.