Star Wars Day with you: The “Force” of Magnets

Home/Posts/Magnetic Field, Magnetic Kownledge/Star Wars Day with you: The “Force” of Magnets
Previous Next

Star Wars Day with you: The “Force” of Magnets

Every geek, science lover, movie enthusiast, and anyone not living under a rock knows that Star Wars Day is May the Fourth! Even if you don’t believe in Lucas’ mystical ‘force’, there is a very real invisible force that we encounter everyday-Earth’s magnetic force. Like the power of the Jedi and Sith, magnetic fields are invisible and magnets possess an invisible but nevertheless powerful force. Magnetism is so powerful that it protects us by preventing space particles and other harmful obstacles from crashing into the Earth’s surface.

It is also responsible for many cool scientific phenomenons. In honor of May the Fourth, we have compiled four of our favorite examples of the magnetic force in action. 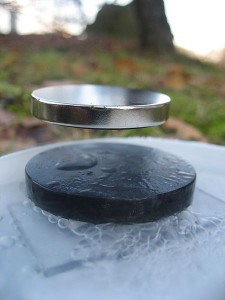 Stable Levitation of magnet on the superconductor

Magnetic fields are inherently invisible but they can be manipulated in order to be seen by the naked eye. This film by Semiconductor Films is shot primarily at NASA’s Space Sciences Laboratories and features chaotic but beautiful shots of magnetic fields as well as stories from space scientists.

The pull force of a magnet can do some major damage. Bones could be broken if caught in the path of two strong attracting magnets.This Slow Motion produced video of magnets breaking objects in the path of their pull force is why magnets are definitely not toys.

The reaction between ferrofluid and magnets is one of the coolest-to-watch scientific event. Ferrofluid is a unique substance because it is a liquid that also has the properties of a solid metal. When it interacts with a magnet, ferrofluid transforms into eye-catching spiky forms. These forms are actually representing the Earth’s magnetic lines. This video below captures some neat ferrofluid and magnet interactions.

Magnetic levitation may the most Jedi-like magnet trick of all. When magnets and metals are cooled to extreme temperatures they contain zero electrical resistance, which means that they expel magnetic fields. In other words, they levitate! You can easily do this with our experiment guide on magnetic levitation.

To all the naysayers that think the force doesn’t exist, here’s some proof that it does-in magnets. Although we may find their lack of faith disturbing, we have a feeling they’ll come around after watching a few of those magnetic forces in action!