Electromagnet or solenoid are general terms for all types of electromagnetic actuators.

Basically, electromagnets or solenoids are devices that generate a magnetic field by means of an energized coil, guiding it through suitable iron parts with air gap. Here, magnetic poles are created inbetween which a magnetic force of attraction, the magnetic force, prevails.

Depending on the construction of the iron parts, the magnetic force is used to carry out linear or rotary movements or to exert holding forces on components, decelerating or fixing them. 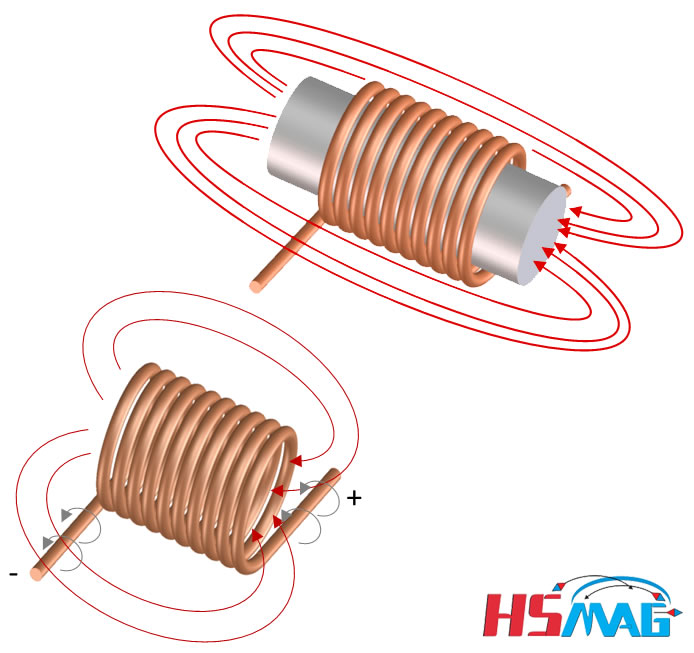 Generation of the magnetic field

If the coil is energized, an electrical current flows in dependence of voltage level and electrical resistance.

This current creates a magnetic field in the coil, which is demonstrated by the red field lines in the picture.

The coil is usually made of enamelled copper wire since copper has a very good electrical conductivity. For extremely large coils, aluminium is also used as conductor material in special cases in order to reduce weight or cost.

The most ordinary form of an electromagnet is the holding magnet, also called pot magnet. The magnetic circuit consists of a pot-shaped magnet body with internal pole surrounding the coil on 3 sides. The force that can be applied to a magnetic component with this device decreases very rapidly the larger the distance of the component from the so-called pole surface gets.

As a rule, if the electromagnet has to function as a linear actuator or linear solenoid, highest possible forces are required with largest possible strokes.

For this purpose, a movable iron part, the armature, is arranged inside the coil at a distance (air gap) from the fixed core.

If the coil is fed with current, the armature moves towards the core and executes the stroke with the dimension of the air gap. The armature’s movement can, for example, be led outside the electromagnet via an armature rod through a hole inside the core.

Magnetic force as a function of stroke and air gap

Inside electromagnets, magnetic force and stroke are decisive variables for their selection and they are mutually dependent.

The picture on the left shows a sectional view of a solenoid and the picture above shows the force curve over the stroke or air gap.

The shape of the characteristic curve is determined by the design of the core and armature and can be very accurately determined by using modern calculation tools (finite element method). Fine-tuning is still carried out by adjusting the sample devices’ geometries.

The magnetic force FM is the exploitable part, i.e. the part of the mechanical force generated inside the linear solenoid, with stroke direction in a horizontal armature position which is reduced by the friction.

FF = Force applied to the armature by the magnetic field (N)

The stroke force FH is the magnetic force which occurs outside, taking into account the associated component of the armature weight FA.

Due to the geometric design of the armature and core, three fundamentally different types of characteristic curves can be achieved.

The decreasing characteristic curve is rarely used for linear solenoids, it is applied where high friction forces need counterforces.