MnZn Ferrite – Manganese zinc ferrite (MXO) and NiZn Ferrite – nickel zinc ferrite (NXO) is the production of soft ferrite in the most species, the most widely used two series core components. We know that for the TV line for the output transformer U-core, deflection core, as well as the transformer E-shaped core, are generally made of manganese zinc ferrite material. Magnetic antenna for radio, there are manganese zinc zinc, but also from the rod end to distinguish between different colors. For example, some factories in the manganese-zinc wave rods in the rod-side sprayed with black paint, nickel-zinc short-wave bar in the rod end sprayed with red paint. In addition, a variety of ring core also has manganese zinc, nickel zinc points. 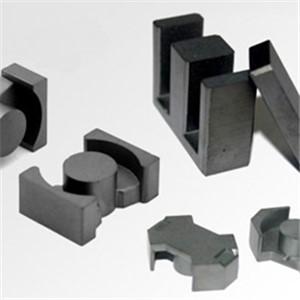 However, the smaller the size of the thread-shaped, cylindrical, shaped and cap-shaped core, and some use of manganese material, and some made of nickel-zinc material, and Zi core and no color, when these Core mixed together, how to distinguish it? Here are two specific methods.

① In the bright light where, if you see the color of black ferrite, a bright bright crystal, the core MnZn ferrite; If you see the ferrite with brown, shiny dim, grain Not dazzling, this core is nickel zinc ferrite. Visual method is a relatively rough method, after a certain practice can be mastered.

The visual method is best to prepare a normal magnifying glass, if there are several components on the better, in order to compare. In the case of bright daylight, with a magnifying glass to observe, if the ferrite with brown, and shiny dim; grain is not bright, then the magnetic element is nickel zinc ferrite.

If you see the color black ferrite, a bright bright crystal, then the magnetic element for the Mn-Zn ferrite. If several components of the same species, can not distinguish, you can with the home of the radio in the comparison of the magnet bar, it is easy to distinguish. It is noteworthy that this method is not difficult to distinguish in the light, the best observation during the day in the outdoors.

Before the test, to make two arbitrary positions on the core electrode, in order to test convenience, optional screw-shaped, cylindrical, the shape of the core two cylinder end electrode, cap-shaped core optional in the same circular plane for the two And then coated with a good conductive material as the test electrode, the general 6B pencil can be coated with two graphite electrodes, made of cylindrical core, the surface of the electrode, Cap-shaped core shown in the graphite electrode, DC voltage measured in tens of volts above the resistivity. After making two graphite electrodes, can also be used 500-type multimeter (range selector switch can be placed on the 10K file) to measure the resistance of the core to distinguish between manganese zinc or nickel zinc ferrite. The general resistance of the following is 150KΩ MnZn; resistance is quite large, multimeter pointer is basically the first fixed nickel-zinc ferrite.

② We can also use manganese zinc and nickel-zinc ferrite frequency f to distinguish between the use of different. As the use of Mn-Zn ferrite material frequency is generally below 2 MHz, its Q value is low; and nickel-zinc ferrite frequency in the 2 ~ 200MHz, its Q value is higher. We can use ready-made high-frequency coil, the coil is not required to install the core, the inductance is less than 20μH, first to take out the core, and then to test the ferrite cores were installed in QBG- Q table or other instruments with the same precision on the measured Q value, Q value for the high nickel zinc; Q value is low (usually several times lower) is manganese zinc.

If the above methods are used at the same time, the judgment is more correct.
At present, some factories in order to reduce costs, zinc and zinc to zinc, magnesium and zinc are also applicable to high-frequency, so, whether visually or test the high-frequency core components may not be nickel zinc, but magnesium zinc ferrite, which One point to draw attention.

How to Recognize Neodymium Iron Boron Appearance Defects Correctly NdFeB appearance defect detection of a correct understanding, is conducive to customer an objective understanding of this new detection technology. Equipment is not a panacea, but […]

How to Use Electromagnetic Locks