What is Selective Catalytic Reduction?
Selective Catalytic Reduction (SCR) is an advanced active emissions control technology system that injects a liquid-reductant agent through a special catalyst into the exhaust stream of a diesel engine. The reductant source is usually automotive-grade urea, otherwise known as Diesel Exhaust Fluid (DEF). The DEF sets off a chemical reaction that converts nitrogen oxides into nitrogen, water and tiny amounts of carbon dioxide (CO2), natural components of the air we breathe, which is then expelled through the vehicle tailpipe.

SCR technology is designed to permit nitrogen oxide (NOx) reduction reactions to take place in an oxidizing atmosphere. It is called “selective” because it reduces levels of NOx using ammonia as a reductant within a catalyst system. The chemical reaction is known as “reduction” where the DEF is the reducing agent that reacts with NOx to convert the pollutants into nitrogen, water and tiny amounts of CO2. The DEF can be rapidly broken down to produce the oxidizing ammonia in the exhaust stream. SCR technology alone can achieve NOx reductions up to 90 percent.

SCR is short for Selective Catalytic Reduction, and SCR is a type of active emission control system for diesel powered car. Automotive-grade urea is often served as reductant source, otherwise known as DEF (Diesel Exhaust Fluid) or AdBlue. The reductant agent will be injected into the exhaust stream of the engine, then convert nitrogen oxide into nitrogen, water vapor and carbon dioxide through the chemical reaction, hence discharged through vehicle tailpipe. According to the EPA emissions standards, all heavy-duty diesel truck engines should reduce particulate matter and nitrogen oxides to near zero level.

SCR system installation on the vehicle

Why is SCR important?
SCR technology is one of the most cost-effective and fuel-efficient technologies available to help reduce diesel engine emissions. All heavy-duty diesel truck engines produced after January 1, 2010 must meet the latest EPA emissions standards, among the most stringent in the world, reducing particulate matter (PM) and nitrogen oxides (NOx) to near zero levels. SCR can reduce NOx emissions up to 90 percent while simultaneously reducing HC and CO emissions by 50-90 percent, and PM emissions by 30-50 percent. SCR systems can also be combined with a diesel particulate filter to achieve even greater emission reductions for PM. In the commercial trucking industry, some SCR-equipped truck operators are reporting fuel economy gains of 3-5 percent. Additionally, off-road equipment, including construction and agricultural equipment, must meet EPA’s Tier 4 emissions standards requiring similar reductions in NOx, PM and other pollutants.

Where is SCR used?
SCR has been used for decades to reduce stationary source emissions. In addition, marine vessels worldwide have been equipped with SCR technology, including cargo vessels, ferries and tugboats. With its superior return in both economic and environmental benefits, SCR is also being recognized as the emissions control technology particularly helpful in meeting the U.S. EPA 2010 diesel engine emission standards for heavy-duty vehicles and the Tier 4 emissions standard for engines found in off-road equipment. SCR systems are also found in the growing number of diesel passenger vehicles. 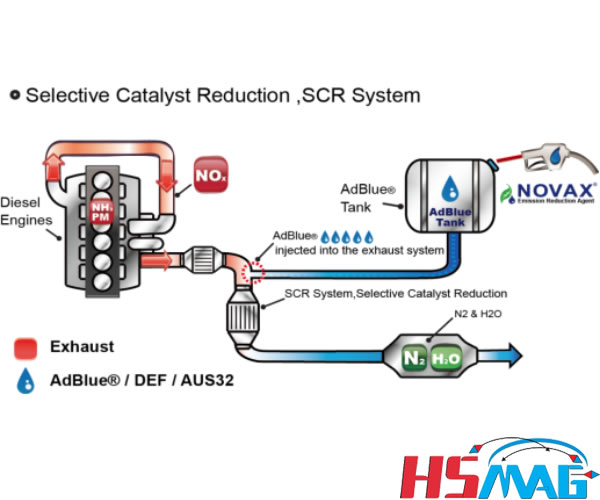 What are the special considerations of using SCR?
One unique aspect of a vehicle or machine with an SCR system is the need for replenishing Diesel Exhaust Fluid (DEF) on a periodic basis. DEF is carried in an onboard tank which must be periodically replenished by the operator based on vehicle operation. For light-duty vehicles, DEF refill intervals typically occur around the time of a recommended oil change, while DEF replenishment for heavy-duty vehicles and off-road machines and equipment will vary depending on the operating conditions, hours used, miles traveled, load factors and other considerations.

DEF is an integral part of the emissions control system and must be present in the tank at all times to assure continued operation of the vehicle or equipment. Low DEF supply triggers a series of escalating visual and audible indicators to the driver or operator. Once the tank reaches a certain level near empty, the starting system may be locked out the next time the vehicle is used, preventing the vehicle from being started without adequate DEF. A nationwide DEF distribution infrastructure has rapidly expanded to meet the needs of a growing SCR technology marketplace.

On-board tanks to store DEF are typically located in the spare tire area of passenger vehicles, while tractor trailers typically have a DEF tank alongside the diesel fuel saddle tank. Proper storage of DEF is required to prevent the liquid from freezing at temperatures below 12 degrees Fahrenheit, and most vehicle DEF dispensing systems have warming devices.

Adblue has already became consumables of SCR System nowadays. Components of Adblue are urea (32.5%) and demineralized water (67.5%). The concentration of urea has a big influence on the reduction rate of nitrogen oxide and crystallization point of the urea solution. The improper concentration is not only can’t improve the transformation efficiency, but also causes residual ammonia, thus lead to the secondary pollution. 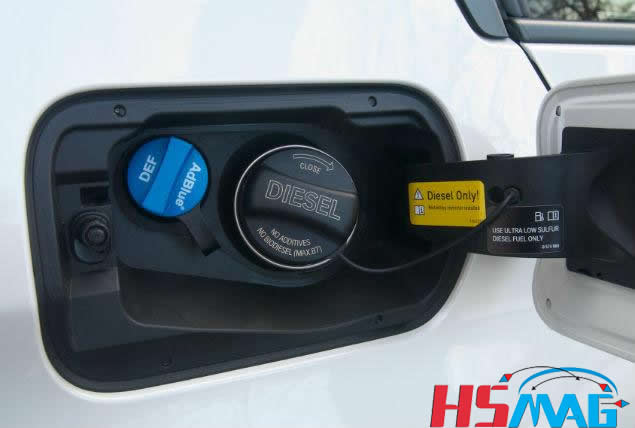 In the past few years there has been a continuous flow of innovations and regulations aimed at reducing the emissions from the cars of today and the future and making them cleaner than they have ever been before. EURO 5 emission standards required diesel engines to have nitrogen oxide (NOx) emissions no higher than 180 mg/km. These targets could be reached by “just” increasing the efficiency of the engine.

Diesel engines are 20% more energy efficient than petrol engines, resulting in lower fuel consumption (approx. 20%) and lower carbon dioxide (CO2) emissions (approx. 15%). This makes diesel engines an important factor for the implementation of European climate protection targets – despite the fact that NOx emissions from diesel engines are several times higher than those of petrol engines.
The current emission standard in Europe (EURO 6) challenges the automotive industry with respect to CO2, particle, hydrocarbon, and NOx emissions.
All newly registered cars have had to meet EURO 6 emission standards since September 2015. EURO 6 reduced the NOx target emission value to 80 mg/km, which is now only one third higher than those of petrol engines.

These values call for different measures to reach the targets. One preferred way to achieve EURO 6 is additional treatment of the exhaust emissions by using selective catalytic reduction (SCR) technology, known in Europe under the AdBlue brand. 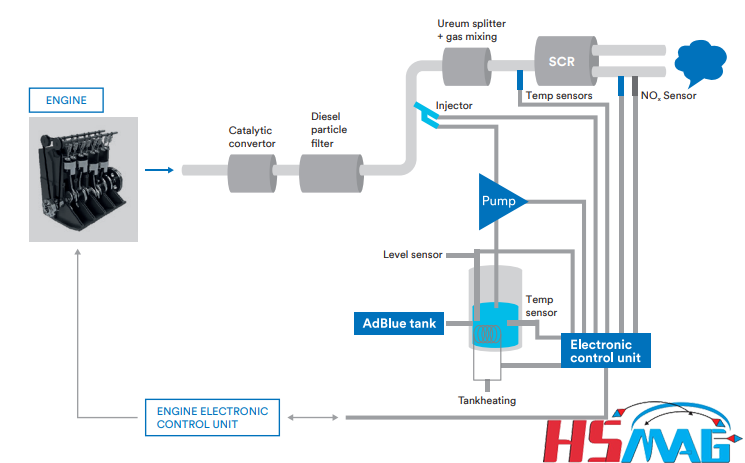 The in-built warning sensor will alert the driver when the AdBlue level is low, and actually, there should not be much need to top up too often. AdBlue should be poured in by professional filler nozzle, and how to avoid the miss-filling of Adblue must take into consideration during the early design stage of the whole SCR System.

The introduction of magnetic design is a wise choice for SCR System, and ISO 22241-4 detailed describes the working principle of magnetic design. There is a magnetic switch on the nozzle, which will only be opened under the magnetic field of magnetic adaptor on the filling point. Then Adblue will be allowed into the talk. Therefore, miss-filling into the diesel tank is made impossible.

As urea solution, the AdBlue is alkaline. The steel, cast iron, cast aluminum and solder will be corroded by AdBlue, and relevant corrosion material will affect the normal operation of SCR System. This is exactly why designers apply magnetic design in SRC System. The magnet also has risks to be corroded under the alkaline conditions, and HSMAG Team has developed AdBlue resistance magnet for filling system under this background. 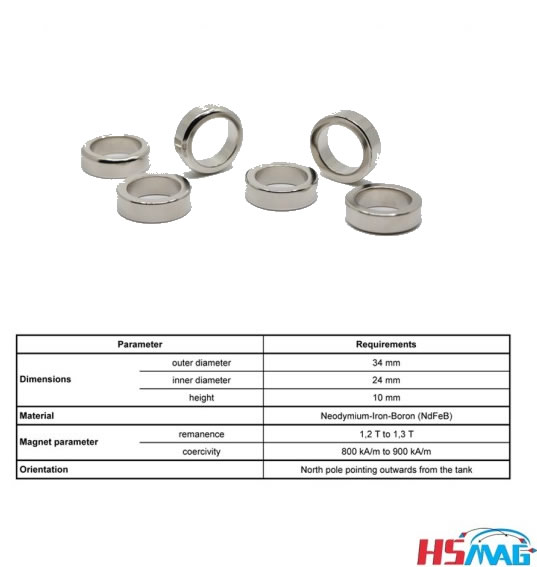 Urea dosing systems must ensure injecting the precise amount of urea for the SCR reactions and uniform mixing of urea and ammonia with the exhaust gas. Better atomization and smaller droplet size of injected urea allow a more complete conversion to ammonia and can minimize the risk of fouling by solid deposits. Many commercial urea injection systems utilize compressed air to improve atomization, but airless systems have also been developed. The urea dosing system components include pumps, injectors, mixers, and urea tanks.

Commercial deployment of urea-SCR systems depended on the development of not only the catalyst, but also the urea dosing and injection system. The increase in NOx conversion efficiency of SCR systems that has been seen since the launch of SCR technology on diesel engines around 2005 is largely owed to advances in SCR control and urea injection. The main functions of the urea dosing and injection system include:

Dosing of the precise amount of urea necessary for the SCR reactions with NOx, and
Mixing urea and ammonia thoroughly with the exhaust gas.
The amount of injected urea must match the ammonia demand corresponding to the amount of NOx entering the catalyst and the NOx conversion efficiency at given operating conditions (catalyst temperature and space velocity). If the amount of ammonia is insufficient, a fraction of NOx that otherwise could be reduced will remain unconverted, resulting in a NOx conversion penalty. If the amount of injected ammonia is more than can be consumed in the SCR reactions, it will cause an unacceptably high ammonia slip. In systems that include an ammonia slip catalyst, some of the ammonia may be oxidized back to NO, thus decreasing the effective NOx conversion.

In order to maximize NOx conversion, the most sophisticated urea injection algorithms need to consider not only engine-out NOx emissions, but also the ammonia storage in the catalyst washcoat. NH3 stored in the washcoat—the amount of which changes dynamically, depending on the history of operating conditions—plays an important role in the overall reductant balance. As it is not easy to accurately model ammonia storage and release under transient conditions, SCR control is not a trivial task.

Even if the amount of injected urea matches the actual ammonia demand, uniform flow distribution and thorough mixing of urea/ammonia with exhaust gases must be ensured to achieve high NOx conversion. If the NH3/NOx ratio is not uniform, catalyst channels with insufficient ammonia will show poor NOx conversion while those with an excess of ammonia will be a source of ammonia slip. Flow maldistribution may be minimized by avoiding elbows or other flow disturbances and by providing a sufficient pipe length upstream of the SCR catalyst [Mathes 1999]. In addition, static mixing devices [Berner 1993] may be provided downstream, as well as upstream, of the urea injection point. In many SCR systems, especially those for heavy-duty engines, urea is mixed with compressed air before it enters the injection nozzle, in order to improve atomization [Helden 2002]. Regardless of the injection method, optimization of urea dosing and injection—in terms of accuracy and reproducibility, as well as mixing—is one of the most important areas where SCR performance improvement can be achieved.