In 2014, the first known meteor from outside of our Solar System crashed into the ocean near Papua New Guinea. It was one and a half feet wide, but broke up into smaller fragments. Scientists will attempt to bring pieces about 0.1 millimeter (about the thickness of a piece of paper) up from the ocean depths using magnets.

The researchers have narrowed down a search area that is roughly six miles by six miles. They will attach strong magnets to a sled about the size of a twin mattress. And then tow that behind a boat, dragging it along the seafloor. They estimate the cost of this expedition at $1.6 million, which is much lower than a mission to collect samples from the next interstellar object to pass nearby.

Researchers at Harvard’s Galileo Project studied the meteor, named CNEOS 2014-01-08, using NASA’s public database. They claimed it was traveling too fast to be from within our Solar System. The sun’s gravity enforces a speed limit of sorts. Peer review on that conclusion has not yet taken place. But the U.S. government’s Space Command recently confirmed the likelihood that the meteor was interstellar.

In the last five years two objects traveling too fast to come from inside the Solar System have been detected. Inevitably planetary scientists want to study them, a desire that grew significantly with signs each, in different ways have compositions unlike anything local. Theoretically we could plant a spacecraft in orbit and wait for the next such visitor, but the immense velocities that identify these objects also make them hard to catch.

However, in 2014 one such interloper apparently came to us, landing in the Pacific Ocean, and remnants are thought to remain on the sea floor. In a preprint paper on ArXiv.org, Harvard Professor Avi Loeb and student Amir Siraj propose a plan to collect some pieces as part of their Galileo Project. 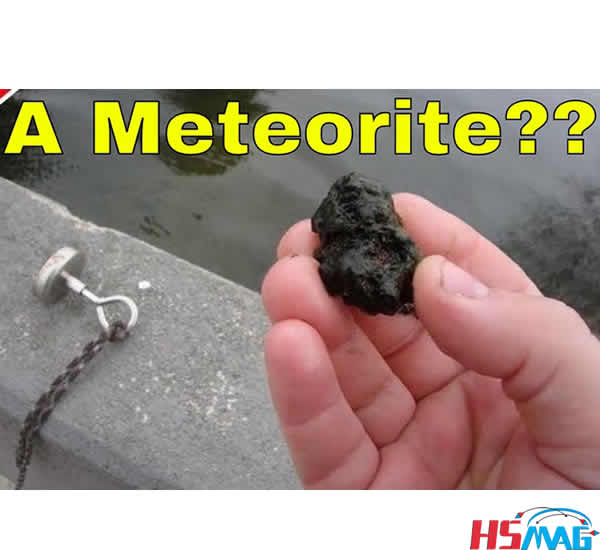 Their idea is to lower a giant and very powerful magnet on a long line winch to sweep the sea floor where they think pieces lie. Fortunately for them, the area 1.3 degrees south, 147.6 degrees east is continental shelf, rather than deep ocean. Nevertheless, it’s possible to imagine a few obstacles to the plan.

For a start, Siraj is confident the object they are seeking, CNEOS 2014-01-08 is so rich in iron, based on its apparent material strength, that the magnet’s attraction will overcome the stickiness of the seabed. However, there’s a lot of supposition in that. Furthermore, we don’t know much about that part of the sea floor – there could be enough terrestrial iron there that the magnet grabs things it isn’t meant to. The project also relies on currents not having moved the meteorite pieces outside the search zone.

Still, even if the probability of success isn’t great, the payoff could be immense.

The project is expected to cost $1.7 million, and Live Science reports so far $500,000 has been committed.

In 2019 Loeb and Siraj investigated observations recorded in the Center for Near-Earth Object Studies (CNEOS) catalog of asteroids that have approached, or actually hit the Earth. Seeking anything moving suspiciously fast, they noticed three candidates. The most promising was an impact on January 6, 2014 north of Manus Island Papua New Guinea, then site of Australia’s notoriously traumatizing detention center for refugees.

The available data indicated CNEOS 2014-01-08 was traveling 60 kilometers per second (135,000 miles per hour) relative to the Sun when it hit. That’s well clear of the 42 km/s required to take an object out of the Solar System if the Earth hadn’t got in the way. Since no close planetary approaches accelerated it, CNEOS 2014-01-08 must have acquired that velocity elsewhere, making it an interstellar object.

At the time, however, some of the data on CNEOS 2014-01-08 was classified, so the error bars were large enough to leave some doubt. Public interest got the missing information declassified and interstellar status was confirmed. MAGNETIC FISHING FIND A METEOR

The finding implies interstellar visitors are common, but this could still be our best chance to analyze one for a while.

CNEOS 2014-01-0 is thought to have been just 0.5 meters (1.5 feet) wide on impact, and Siraj told Live Science “It struck the atmosphere with about 1% the energy of the Hiroshima bomb.” Nevertheless, it is thought many fragments survived, although they’re probably microscopic.

Even if successful, the mission will only reveal one interstellar visitor’s make-up, not all of them. Local meteorites have quite a range of compositions, and we know ‘Oumuamua and 2I/Borisov were very different beasts. Still, it would be a start.

Loeb and Siraj have made contradictory names for themselves in recent years. They have proposed a string of intriguing and plausible hypotheses. On the other hand, Loeb in particular has vigorously promoted controversial claims – most famously that ‘Oumuamua is an alien spaceship – despite a complete lack of evidence. MAGNETIC FISHING FIND A METEOR