Samarium Cobalt magnets and Neodymium Iron Boron magnets are important Rare Earth Magnets. Many people want to understand how to use them, so we wrote this guide. Here we break down the important similarities and differences so you can quickly decide which is right for your application. 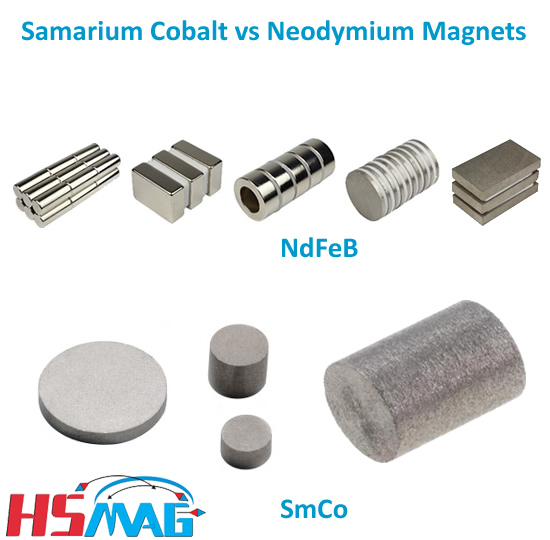 So what are the basic differences between SmCo and NdFeB? SmCo magnets operate better than NdFeB magnets at higher temperatures and in more corrosive environments than Neodymium magnets. Neodymium magnets have a much stronger magnetic field –with the highest BH Max of any permanent magnet available today –and they are cheaper than SmCo.

SmCo and NdFeB magnets also have important similarities. They are both Rare Earth Magnets. They are both very strong magnets with very high BH Max (Maximum Energy Product) and high Coercivity (resistance to demagnetization) and they are both commercially important on a large and growing scale.

There are other important similarities and differences between SmCo and NdFeB magnets we will examine more closely, but these are the biggest considerations. As with many engineering materials, there are some finer details to consider in any trade study between two materials.

What are Rare Earth Magnets -and What are They Used For?

They are called are rare earths, because Samarium and Neodymium are both found in the Lanthanide series of metals on the Periodic Table, so the properties and crystal structures of these magnets are very similar to each other.

The Neodymium magnet also has a very small amount of Boron, which makes it different from a SmCo magnet since NdFeB uses three major alloying elements but SmCo uses only two.

Rare Earth magnets are the strongest known permanent magnets. They are used for many high-tech purposes, such as automotive electric drive motors, smart speakers, smart phones (see our article on NdFeB magnets in smartphones smart speakers and IOT devices here), sensors and many more applications.

How Rare Earth Magnets are Made

The major steps of the process of making Neodymium magnets at HSMAG own high-tech facility can be found here. The process steps for rare earth magnets include mining, production of powder, milling, pressing, annealing, cutting, grinding and surface finishing. 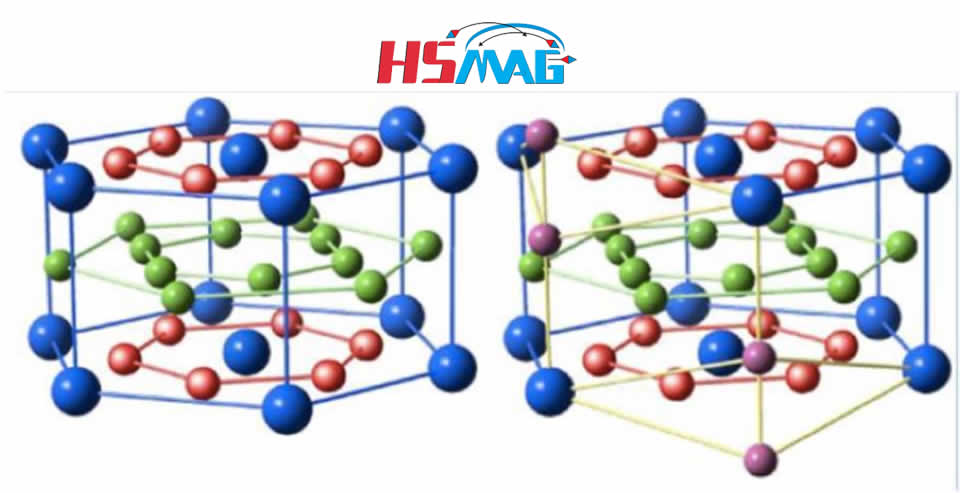 These crystal structures tightly concentrate the magnetic field in the north-south direction. When a material property is so concentrated in a single direction like this, it is called anisotropic. You can learn more by reading our post about magnetic isotropy.

SmCo magnets are comprised of about 65% cobalt. Cobalt is a major component of stainless steel, so it is easy to see that cobalt is a big reason the corrosion resistance of SmCo magnets is so good. Cobalt is one of the three naturally ferromagnetic elements besides iron and nickel.

NdFeB magnets are about 65% iron (iron is ferromagnetic as mentioned above). Iron has very poor corrosion resistance unless corrosion-resistant metals are added to it.

NdFeB typically has about 1.5% cobalt added to improve corrosion resistance a little bit, but that is a very small percentage of cobalt compared to what’s in SmCo magnets.

NdFeB magnets can be coated with electroplate, epoxy and other coatings that can give them excellent corrosion resistance even very challenging environments.

NdFeB can even be coated with coatings that will pass a 1000-hour salt fog test – a very intensive corrosion test. If you are considering an application in a challenging environment, you can specify NdFeB with confidence. Just be sure to consult with one of our coatings engineers first to be sure the coating matches the application.

SmCo is very well known to have excellent corrosion resistance due to the large percentage of cobalt. Yet SmCo gets coated for a number of applications for improved cleanliness and resistance to chipping, since SmCo magnets are more brittle than NdFeB magnets.

SmCo is well-known for operating at higher temperatures than NdFeB, but another important factor in favor of SmCo is the flatter curve of its temperature coefficient.

The (Br) temperature coefficient of SmCo magnets is only -0.03-05%/degree C. It’s much smaller than the -0.11%/degree C value for NdFeB. (Br) stands for “Remanence” and you can learn more about Magnetic Remanence on our website here.

This means SmCo loses less field strength per degree of temperature increase than does NdFeB. This makes it easier for the engineer to make adjustments for temperature effects since these effects are smaller over a larger temperature range.

The two things that cause a magnet to demagnetize are high temperatures and high opposing magnetic fields. By this measure, SmCo magnets greatly excel over NdFeB magnets –especially at elevated temperatures.

SmCo vs NdFeB Magnet Strength -How Strong Are They?

Samarium Cobalt and Neodymium Iron Boron both make very strong magnets. The big difference is in the optimum temperatures for each magnet.

Neodymium Iron Boron magnets are the strongest permanent magnets available at room temperature and up to about 180 degrees C –measured by their magnetic Remanence (Br). But their strength decreases rapidly as the temperature rises.

As the operating temperature begins to approach the 180 degree C area, Samarium Cobalt magnets begin to outperform NdFeB. The performance differences can be seen in the chart below.

Also, it is plain to see that the SmCo change in performance over temperature is much more flat than the change for NdFeB just by looking at the graph. 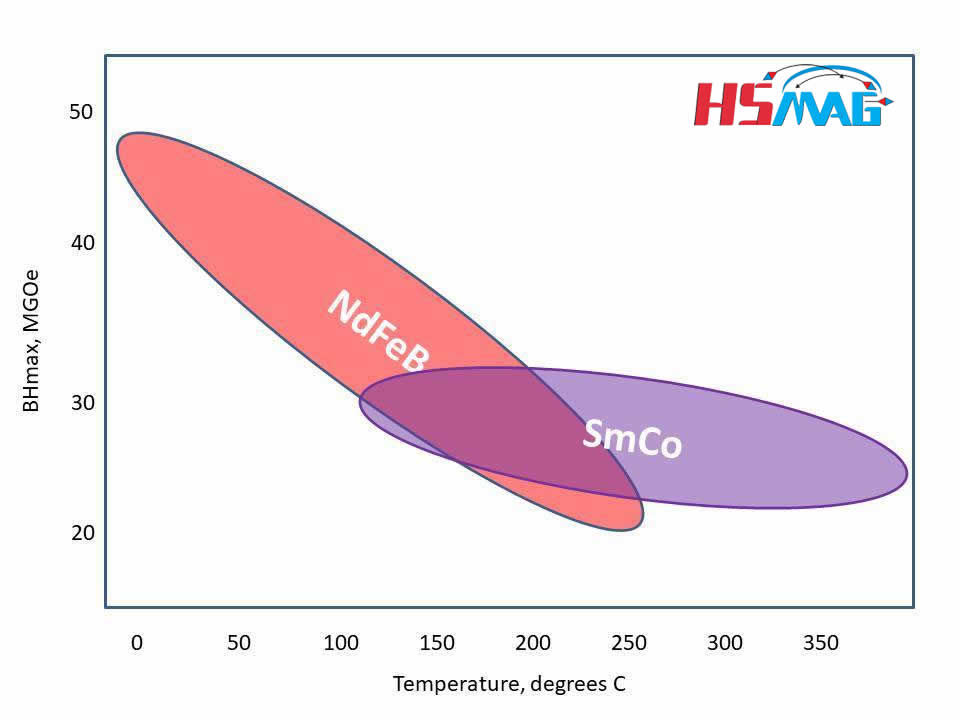 Coercivity of SmCo vs NdFeB

Coercivity -also known as Coercive Force- is sometimes an overlooked factor when comparing NdFeB and SmCo. Coercivity is defined as the resistance to demagnetization.

If magnets are in an environment where the forces of demagnetization are strong -such as in opposing magnetic fields- at high temperature- or both, they can begin to lose their magnetic field.

Both NdFeB and SmCo magnets have extremely high Coercivity in comparison to other magnet materials.

How do you decide whether to use SmCo or NdFeB for your application? It’s good to look at the ways other applications specialists have used both types of magnets. NdFeB magnets are typically used for room temperature and mildly elevated temperatures up to approximately 180 degrees C and where corrosion resistance isn’t a major factor.

What to do Next

Both magnets: Neodymium-Iron-Boron, and Samarium-Cobalt, are vital to a high-tech society. Designers have done, and continue to do a lot with- both types of magnets.

As HSMAG technologists continue to improve both magnet types, we’ll post updates here on our site. If you need more information, and as you generate specific questions about your applications, feel free to contact us.