A team of Virginia Commonwealth University scientists has discovered a new class of ‘superatoms’ – a stable cluster of atoms that can mimic different elements of the periodic table – with unusual magnetic characteristics.

The superatom contains magnetized magnesium atoms, an element traditionally considered as non-magnetic. The metallic character of magnesium along with infused magnetism may one day be used to create molecular electronic devices for the next generation of faster processors, larger memory storage and quantum computers.
In a study published online in the Early Edition of the Proceedings of the National Academy of Sciences, the team reports that the newly discovered cluster consisting of one iron and eight magnesium atoms acts like a tiny magnet that derives its magnetic strength from the iron and magnesium atoms. The combined unit matches the magnetic strength of a single iron atom while preferentially allowing electrons of specific spin orientation to be distributed throughout the cluster. 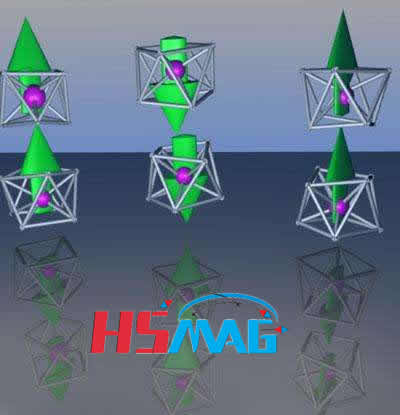 A proposed assembly of FeMg8 magnetic superatoms where the directions of magnetic moment is indicated by arrows. Image courtesy of Victor Medel/VCU.

Through an elaborate series of theoretical studies, Shiv N. Khanna, Ph.D., a Commonwealth professor in the VCU Department of Physics, and his team examined the electronic and magnetic properties of clusters having one iron atom surrounded by multiple magnesium atoms. The team included instructor J. Ulises Reveles and Victor M. Medel, a post-doctoral associate, both from VCU; A. W. Castleman Jr., Ph.D., the Evan Pugh Professor of Chemistry and Physics, and Eberly Distinguished chair in Science in the Department of Chemistry at Penn State University; and Prasenjit Sen and Vikas Chauhan from the Harish-Chandra Research Institute in Allahabad, India.

“Our research opens a new way of infusing magnetic character in otherwise non-magnetic elements through controlled association with a single magnetic atom. An important objective was to discover what combination of atoms would lead to a species that is stable as we put multiple units together,” said Khanna.
“The combination of magnetic and conducting attributes was also desirable. Magnesium is a good conductor of electricity and, hence, the superatom combines the benefit of magnetic character along with ease of conduction through its outer skin,” he said.

The team found that when the cluster had eight magnesium atoms it acquired extra stability due to filled electronic shells that were far separated from the unfilled shells. An atom is in a stable configuration when its outermost shell is full and far separated from unfilled shells, as found in inert gas atoms. Khanna said that such phenomena commonly occur with paired electrons which are non-magnetic, but in this study the magnetic electronic shell showed stability.
According to Khanna, the new cluster had a magnetic moment of four Bohr magnetons, which is almost twice that of an iron atom in solid iron magnets. A magnetic moment is a measure of the magnetic strength of the cluster. Although the periodic table has more than one hundred elements, there are only nine elements that exhibit magnetic character in solid form.

“A combination such as the one we have created here can lead to significant developments in the area of “molecular electronics” where such devices allow the flow of electrons with particular spin orientation desired for applications such as quantum computers. These molecular devices are also expected to help make denser integrated devices, higher data processing, and other benefits,” said Reveles.
Khanna and his team are conducting preliminary studies on the assemblies of the new superatoms and have made some promising observations that may have applications in spintronics. Spintronics is a process using electron spin to synthesize new devices for memory and data processing.

The Mystery of the Horseshoe Magnet