REED SWITCH MAGNETS
Reed Switches are amongst the simplest of all the magnetic field detection devices. It consists of two thin ferromagnetic plates (usually nickel-iron or nickel-cobalt) called reeds within a glass ampoule (casing) which overlap each other except for a small gap between them so they are not quite touching. 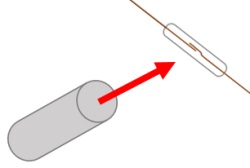 A typical example is in security systems a magnet holds the Reed Switch closed when a window closed; when the window opens the magnet is taken away and the switch opens changing the electrical circuit and hence setting off the alarm.

Although a few versions exist, the most commonly used is of the above description which is called a SPST-NO (Single Pole Single Throw Normally Open Reed Switch).
One issue with reed switches is how they are rated. Reed Switch Suppliers use an Ampere-turn rating (A-t) for activating their reed switches (due to their using electromagnet coils with a certain number of turns and an applied current). In the Magnetics Industry the units are Gauss, Tesla or perhaps even Oersted (units of magnetic field used for magnets). The units are not easily interchangeable. A very rough guide is:-

Where L is derived from the coil that the Reed Switch manufacturer uses. The coil may perhaps be a standard coil known as a Narm 1 coil that has a length, L, of 1.039 cm if the coil length is not known, using L=1.039 is a good estimate to consider using.

However, changing the reed switch terminal lengths, bending the terminals and altering the direction from which the magnetic is brought towards the Reed Switch can all affect the above rough guide. So the Gauss value is shown to be anything from 1 to 3 times the NI value (some Reed Switch companies even suggest up to 10 times). So perhaps testing with sample magnets beforehand may be advised if the Reed Switch company only offers Ampere turn data.

We will give Gauss values (1 Gauss = 1 Oersted = 0.0001Tesla) and have assumed 1A-t~1.451Gauss (bearing in mind the A-t to Gauss conversion may need altering to suit your application).