Recycling NdFeB Magnet – Rare earth elements have been becoming a critical part of everyday life and advanced technological development during the past several decades. The rare earth demands are rising and its supplies are in question due to Chinese government export duties. Hence price issue of rare earth element has been widespread concerned. It is considered that the rare earth recycling is not only solving the rare earth elements supply issues on a certain degree, but also avoid environmental pollution caused by carelessly disposed.

Objective of the project is to a process for recycling of NdFeB magnets and the rare earth metals they contain. In addition, companies collecting and recycling e-scrap will be charted in Finland, Scandinavia and Europe. Rare earth metals are key elements in many electric and electronic devices. They are mainly produced in China, where the mining and refining industry causes major environmental damages. Worldwide approximately 45000 tons of NdFeB magnets are scrapped annually. They contain about 15000 tons of Rare earth metals Nd, Pr, Tb and Dy, with a value of 1.6 to 2.0 Billion USD. Virtually all the magnets are melted together with steel scrap and the rare earth metals are lost in the slag. The amount of scrapped magnets is increasing and is estimated to double in the next ten years. In the project a process will be developed and tested in the laboratory scale to separate NdFeB magnet material from other metallic scrap. Moreover, usability of the recycled material will be tested.

Another national standard GB/T 34490 mentions that the NdFeB scraps should contain end-of-life magnet, and this is also accordant with current research tendency. Upgrade speed of magnet relevant products is very fast, thus a large amount of end-of-life magnet will be created. Actually, these end-of-life magnets are playing an important and complementary role in the NdFeB magnet industry nowadays. 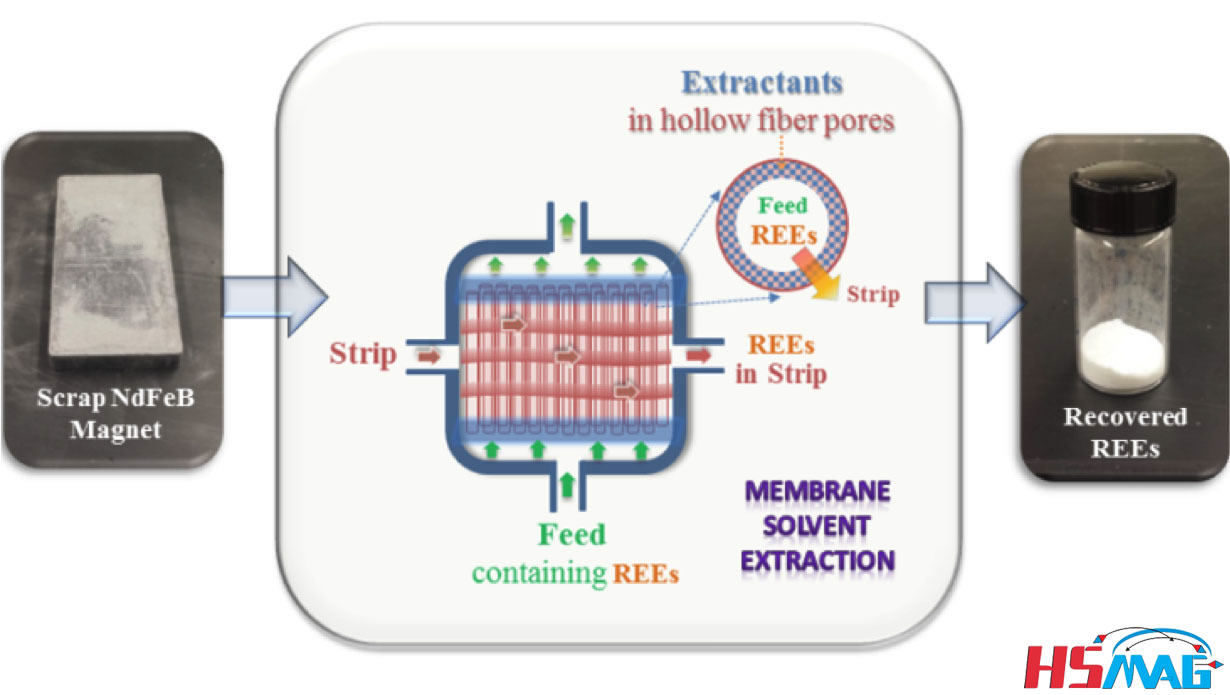 The main stream of NdFeB sludge scraps recycling is the recovery of rare earth element oxide.

Electric motors or wind turbines are driven by powerful permanent magnets. The most powerful ones are based on the rare earth elements neodymium and dysprosium. In future, a new process  will enable the fast and cost-effective recycling of these crucial materials.

The rotors whir in the wind and provide the networks with electricity. In order to ensure that the plants run as fault-free as possible and achieve a high energy yield, the latest generation is increasingly being equipped with strong, multi-ton permanent magnets instead of a gearbox. These magnets do a good job in cars, too: They enable the numerous electric actuators, which drive the windscreen wipers, for instance, to be of a smaller and lighter design. Electric actuators or servomotors are located in many positions inside a car, wherever things need to be specifically moved and positioned, whether for the side windows or for the seat adjustment. The most powerful magnets are based on neodymium, iron and boron. Dysprosium is also frequently contained. The problem: While iron and boron are readily available, the supply of neodymium and dysprosium is critical. Because these rare earth elements are only gained under difficult conditions and with a great deal of energy input. They are therefore quite expensive in comparison and their procurement leaves an ecological footprint behind. Furthermore, more than 90 percent of these elements come from China. Almost half of the worldwide reserves are situated there.

The end-of-life magnets need a professional and systematically collection, then classify and disassembly before recycling.

Some fully dense, sintered NdFeB-type magnets (employed in VCM disc drives) have been subjected to a recycling process using the hydrogen decrepitation (HD) process. After a brief milling treatment, the powder was aligned, pressed and re-sintered and this procedure was repeated four times with a progressive fall in the density and in the magnetic properties. The chemical analysis indicated that this was due to the progressive oxidation of the Nd-rich material and to some Nd loss by evaporation. The procedure was then repeated but with the addition (blending) of a fine powder of neodymium hydride after the first cycle. It was found that the addition of 1 at.% of neodymium at each stage was sufficient to maintain the density and the magnetic properties of the recycled magnets up to and including the 4th cycle. Inductively coupled plasma (ICP) and metallographic analysis indicated that the neodymium hydride additions compensated for the neodymium loss due to evaporation and to oxidation so that the proportion of Nd-rich material remained approximately constant. The additional amount of Nd2O3 in the blended recycled magnets appeared to inhibit grain growth on the 3rd and 4th cycles when compared to that of the unblended magnets. The next challenge is to see if the process can be scaled-up to an industrial scale.

The scientists have already set up a demonstration plant and have managed to recycle magnets there. “The demo system can process up to half a kilogram of molten material and is somewhere between a lab and a large-scale plant”, HSMAG goes on to specify. The researchers are now optimizing the properties of the recycled magnets by varying the melt spinning process – such as the speed of the copper wheel, for example, or the temperature of the melted material during the rapid solidification process. Both influence the cooling rate and consequentially also the crystalline structure of the solidified material.

In many cases, the magnets are extremely difficult to remove from the engines. The scientists are therefore developing potential ways of creating a collection cycle for used engines, and also of a design more suitable for disassembly: How could the engines be alternatively designed to make it easier to remove the magnets at a later date? What costs will be incurred is a question that is currently difficult to answer: “The anticipated financial advantage in recycling the magnets depends not only on the recycling process, but also on the price development for rare earth elements”, Diehl says. “The higher the raw material prices for rare earths, the more it will pay off to recycle already existing materials.” 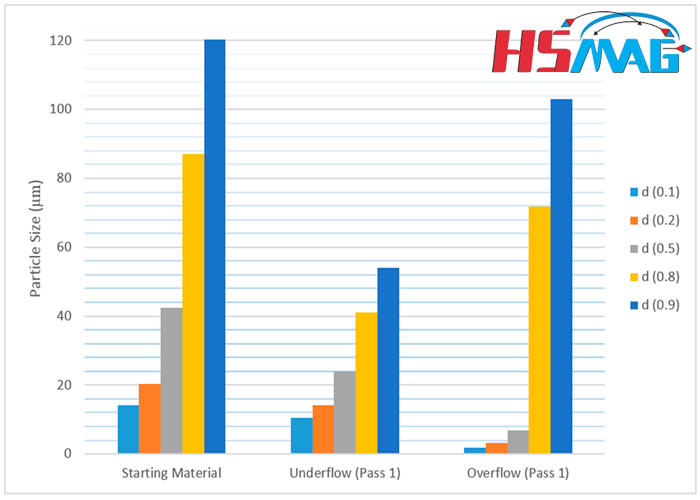 Hydrogen decrepitation (HD) is an effective and environmentally friendly technique for recycling of neodymium-iron-boron (NdFeB) magnets. During the HD process, the NdFeB breaks down into a matrix phase (Nd2Fe14BHx) and RE-rich grain boundary phase. The grain boundary phase in the HD powder is <2 μm in size. Recycled NdFeB material has a higher oxygen content compared to the primary source material. This additional oxygen mainly occurs at the Rare Earth (RE) rich grain boundary phase (GBP), because rare earth elements oxidise rapidly when exposed to air. This higher oxygen level in the material results in a drop in density, coercivity, and remanence of sintered NdFeB magnets. The particle size of the GBP is too small to separate by sieving or conventional screening technology. In this work, an attempt has been made to separate the GBP from the matrix phase using a hydrocyclone, and to optimise the separation process. HD powder, obtained from hard disk drive (HDD) scrap NdFeB sintered magnets, was used as a starting material and passed through a hydrocyclone a total number of six times. The X-ray fluorescence (XRF) analysis and sieve analysis of overflows showed the matrix phase had been directed to the underflow while the GBP was directed to the overflow. The optimum separation was achieved with three passes. Underflow and overflow samples were further analysed using an optical microscope and MagScan and matrix phase particles were found to be magnetic. View Full-Text