Unless you happen to work in the rare earths industry, you probably don’t even think about these 17 rare earth metals – even though you reap their benefits every day and the military needs them to protect us.

This became clear at the annual Argus Specialty Metals Week Conference held at the Hilton Lake Las Vegas Resort & Spa in Henderson, Nevada, about 45 minutes east of downtown Las Vegas. Like last year, the people at Argus Media Inc. assembled a group of experts to discuss rare earths and provided networking opportunities for the delegates.

The over-riding theme of the conference was the dominance of China and how it controls the rare earths market start to finish. China also has most of the world’s rare earths reserves – about 40% – followed by Brazil and Vietnam each with about 18%, Russia with about 15% and India, Australia and the US with 1%–6% of reserves.

While there is a relative abundance of Light Rare Earths Elements (REEs) with world reserves of cerium (+30Mt), lanthanum (+20Mt) and neodymium (15Mt), Heavy Rare Earths Elements (HREEs) are less abundant but still not that rare; for example, dysprosium (~4Mt). According to speaker Mark Seddon, Senior Manager (Metals), Argus Consulting Services, in London, mineable resources are more the issue.

So why are rare earths so necessary? Take a look at the illustration from Ford that shows all the rare earths used in a car. Rare earths are also used to make glass, magnets for motors, speakers, alternators, generators, battery alloys, refinery catalysts, phosphors, ceramics, catalytic converters and military applications such as missile guidance systems, laser range finders and night vision goggles. 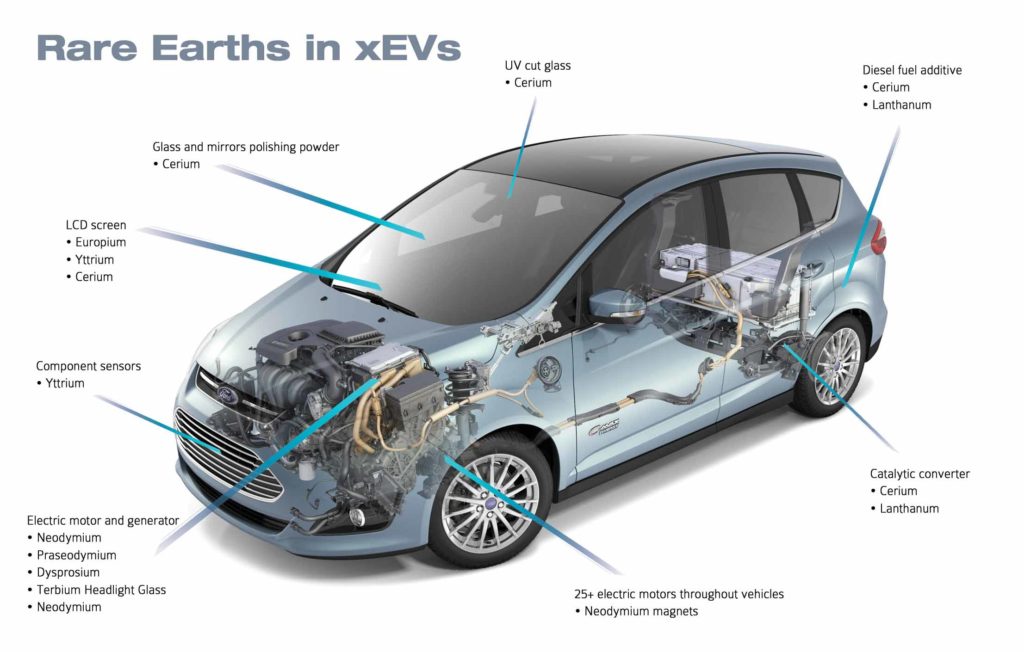 Besides the many neodymium magnets to operate the electric motors in your car, modern stereo systems, PA systems and guitar amplifiers use neodymium for speaker magnets. At the Argus Conference, speaker Suzanne Malden, Global Commodity Manager for Bose Corp., pointed out that her company uses NdFeB magnets in their speakers. She noted that neodymium speakers are a very competitive business with new manufacturers arriving, in particular, headphone makers. Bose manufactures a NdFeB speaker that looks like a pole (the L1) which is very popular with musicians on stage. Malden was concerned that there could be a threat to REEs supply if trade wars develop. In this fast-changing marketplace, she remarked that some REE consumer products have a life of only 2-3 years.

Why are NdFeB speakers so great? In answer to a Resource World question, Andrea Pratesi, Chief Procurement Officer for B&C speakers in Florence, Italy said that neodymium speaker magnets are typically 10 times more powerful than the old ferrite magnets, thus producing a big, bass-lush sound from a small speaker. He added that NdFeB speakers weigh considerably less than the old ones, making it safer to hang speakers from ceilings in auditoriums.

Then there is green energy. In his presentation, Robert Wolf of Alliance LLC in Valparaiso, Indiana, mentioned that wind turbines typically use 594 pounds of neodymium magnets. If they used ferrite magnets, they would weigh 4,752 pounds, making them too heavy to be practical.

China is investing heavily in wind turbines with some 60,000 units to consume 36,000 tons of sintered neodymium magnets by 2020.

On the automotive side, by 2025, it is forecast that some 173 million vehicles will be built worldwide with an estimated amount of REEs needed at approximately 128,668 tonnes, assuming 25% will be electric EVs.

All this sounds great except that Chinese mines need to overcome some major issues, including pollution, contamination, labor rights, health issues, outdated equipment and safety issues. The problem for any competitors in the rest of the world is with China’s monopoly over the REE sector as it can control prices and supply with restrictions on trade.

However, some companies are willing to compete with China, including Lynas Corporation Ltd. [LYC-ASX] of Western Australia and their high-grade Mt. Weld rare earths mine with its 25-year mine life, based on 22,000 tpa rare earths oxide (REO) production. The Lynas refinery is in Malaysia. The company is the No.2 producer with a 20–25% share of global fresh NdPr supply.

Another Aussie, Northern Minerals Limited [NTU-ASX], recently completed construction of a large pilot plant at their Browns Range Mine in Western Australian. The pilot plant, which will be in production in July at 10% of full-scale production (60,000 tpa), will draw on a three-year stockpile of ore. When the full-scale plant is built, 300,000 kilograms of dysprosium will be recovered annually and 3 million kilograms of TREO per year.

One serious problem for the US is that it is dependent on the Chinese to supply REEs for its military. China is not exactly a friend or ally – it is a trading partner. James Kennedy, President of St. Louis-based Th REE Consulting, and a rare earths advisor to the White House, has suggested a solution to this dilemma. He writes, “By developing a structured and integrated solution, historical resources would be redirected into a privately funded and owned, US-based, multi-national and fully integrated rare earth value chain cooperative. The cooperative would be financed, owned, and operated for the benefit of the many rare earth dependent technology companies around the world.”

In another article, Kennedy explained that the US lost its leadership in the REE sector when the Nuclear Regulatory Commission and International Atomic Energy Agency regulations classifying very low levels of thorium, and/or uranium as source materials “took hold in the 1980s, eliminating them from the value chain.” Today, there is not a fully integrated REE value chain outside China.

The US is no longer a REE producer now that Molycorp’s Mountain Pass Mine in California went bankrupt in 2015. The new owner of Mountain Pass is MP Mine Operations LLC – a Chinese-led consortium including rare earths miner Shenghe Resources.

In a recent article, Kennedy alleges that the Molycorp IPO was flawed in that some of it was based on erroneous data. He said that he brought this to the attention of the US Department of Defense, stating that the mine was not economically viable, to no avail.

In the same article, Kennedy criticizes media reports on the recent reports of a $500 billion rare earths discovery on a triangular Japanese island in the Pacific some 800 miles off the coast of Japan. In Kennedy’s view, some media reports give the impression that the REEs are on the island when, in fact, they sit at the bottom of the ocean, three to four miles below the surface.RARE EARTHS REPORT

Below is a selection of companies with rare earths projects.

Appia Energy Corp. [API-CSE; APAAF-OTCQB; Germany-A0I.F, A0I.MU, A0I. BE] is planning to continue exploration in June 2018 on the Alces Lake property, northern Saskatchewan, including overburden stripping, trenching and at least 2,000 metres of diamond drilling working toward a maiden resource estimated in Q4 2018 or Q1 2019.

Geochemical highlights include world-class REE grades up to 45.92 wt% Total Rare Earth Oxide (TREO) over 1.85 metres from outcrop trench sampling in the Ivan Zone, off the main trend of the Wilson Zone which returned up to 18.53 wt% TREO over 2.7 metres. The channel sample results at the Ivan Zone are approximately equivalent to 8.5 oz/ton gold at today’s REO and gold prices. The Alces Lake mineralized zones are highly endowed with critical elements for the magnet industry; for example, 8.714 wt% Nd2O3 and 0.115 wt% Dy2O3 in the Ivan Zone.

A recently completed mineralogy study indicated all REE mineralization is hosted solely within monazite. The project is located just north of the Athabasca Basin, famous for the world’s highest-grade uranium mines.RARE EARTHS REPORT

Avalon Advanced Materials Inc. [AVL-TSX; AVLNF-OTCQX; OU5-FSE] is holding the 100% owned Nechalacho REEs Project at Thor Lake, Northwest Territories that has high concentrations of the scarce heavy rare earth elements. With a completed feasibility study and an approved environmental assessment in place, the project is positioned to bring a new supply of REEs to the market when conditions improve.

Commerce Resources Corp. [CCE-TSXV; CMRZF-OTC; D7H-FSE] has been advancing the Ashram rare earths deposit in Nunavik, northeastern Québec. The deposit has a measured resource of 1.6 million tonnes at 1.77% TREO, an indicated resource of 27.7 Mt at 1.90% TREO, and an inferred resource of 219.8 Mt at 1.88% TREO.

Significant indicated and inferred resources have been outlined.

Geomega’s subsidiary, Innord Inc., has successfully produced neodymium oxide of greater than 99.5% purity from industrial residues, considered to be magnet grade which has now been submitted for validation to the magnet industry end-user who initially provided the industrial residue.

Mkango Resources Ltd. [MKA-TSXV; AIM], through wholly-owned subsidiary Lancaster Exploration, has a 100% interest in two exclusive prospecting licenses in southern Malawi, Africa. The company’s plan is to further develop the Songwe Hill REEs deposit, where a feasibility study is underway, and acquire additional REEs and other mineral opportunities.

Rare Earth Salts of Beatrice Nebraska has developed an environmentally friendly technology for the separation and purification of REEs that provides a significant operational and capital cost advantage over solvent extraction methods. Its technology is proven at commercial scale and functions on a broad range of rare earth concentrates. The company will produce REEs for wind turbines, hybrid automobiles, advanced lasers for defense systems, flat panel screens and fiber optics.RARE EARTHS REPORT

Rwenzori Rare Metals (private) has one of the largest REEs clay deposits outside of China; the Makuutu Project in Uganda. The project has a potential mine life of 30 years and is close to infrastructure. Production is planned to start in 2021. The company says the basket price for Makuutu ore once mined and the REEs separated will be worth US $28,500.

Scandium International Mining Corp. [SCY-TSX; SCYYF-OTC] is focused on developing its Nyngan scandium project in New South Wales, Australia into the world’s first scandium-only producing mine. The company has completed a feasibility study that delivered an expanded scandium resource, a first reserve figure, and an estimated 33.1% IRR on the project that was supported by extensive metallurgical test work and an independent, 10-year global marketing outlook for scandium demand. The project has received all key approvals, including a mining lease, necessary to proceed with project construction.RARE EARTHS REPORT

The company has signed a Letter of Intent with Grainger & Worrall Ltd. in Shropshire, UK, a manufacturer of precision sand cast parts, and engineering services, using both aluminum and steel alloys. The LOI calls for the company to contribute aluminium-scandium master alloy 2%, for mixing and trial-testing of proprietary alloys by GW.

At the Henley Harbour property:

Torngat Metals (private) recently acquired Quest Rare Minerals and is developing the Strange Lake Project. Located 250 km northeast of Schefferville, Québec near the Labrador border, the advanced-stage exploration prospect hosts REEs and yttrium. It is one of the largest REE resources globally, with 100+ year supply at the projected production rate. The company is focused on providing a sustainably produced supply of REEs used in permanent magnets (Dy and NdPr). It has plans to build an open pit mine and be the first in the world to deploy Lockheed Martin airships for transporting the mining equipment north to the site, and to transport a rare earth concentrate to southern Québec for processing and separation.