One can academically appreciate the fact that every electric motor in the world (not counting a couple of very impractical ones) works because of magnetism.

One can reflect on the fact that every transformer uses it, too.

To get a true, visceral appreciation for magnetism, though, you can’t beat playing with magnets.

When I was a kid, I had a bag full of black ferrite magnets of various shapes and sizes. They were fine toys. I could not hurt myself with them.

I’ve grown up now. Well, physically at least. And so I’ve graduated to these. 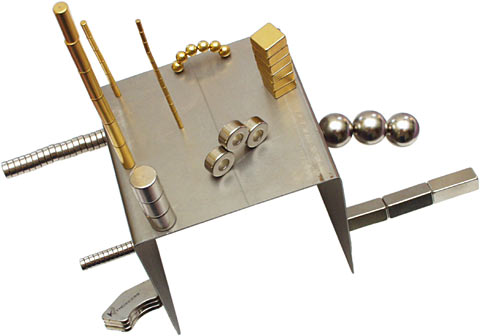 “These”, in this case, are neodymium iron boron (NIB) magnets. They’re commonly just referred to as “neodymium” or “rare earth” magnets, and this composition is both more powerful and cheaper than the previous king of the permanent magnet world, samarium cobalt.

Well, the smallest magnets in the above picture are little gold-plated cylinders only 6.4 by 2.3mm in size. The field extending from these magnets doesn’t reach far with any strength, because the smaller a magnet of a given intrinsic strength is, the smaller will be the volume of space it can fill with a magnetic field of a given strength. Magnetic field strength drops off as the inverse cube of the distance from the magnet, too; get twice as far away and the field strength drops by a factor of about eight. So two of these little tackers barely notice each other over a distance of more than an inch.

But just tossing one of these tiny ‘uns in the vague vicinity of another will cause them to click together end-to-end. And they do it strongly enough that I can hold the one on the end of a full stick of 12 of ’em and twirl the rest around as fast as I can, without them letting go. 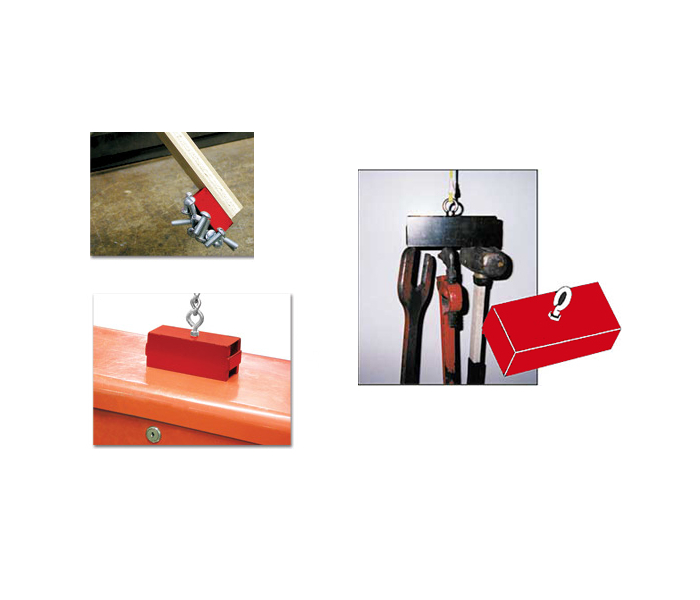 The strongest magnets in this collection, if you ignore the large-surface-area but thin and fragile hard drive magnets (of which more in a moment), are the 18.25mm-diameter spheres. Spherical magnets, mercifully, tend to push your fingers out of the way as they head for each other, so these ones aren’t too prone to pinching people. But they can certainly do it, and playing with them without letting them smack together so hard that they damage themselves is easier said than done. These magnets are all covered with protective metal plating, but careless play will flake it off quite quickly, and the NIB material itself is quite fragile.

This collection of magnets is three “grab bags” worth, from ForceField, who seem to be pretty much the only really serious sellers of a proper range of cheap surplus rare earth magnets on the Internet at the moment.

They’re still not dirt cheap, mind you. I bought three $US20 grab bags on Ebay, and got 81 magnets as a result; they’d all easily fit inside a cigarette packet, if not for the fact that they’d roll it up into a ball if you tried. But it’s a respectable collection, nonetheless.

There’s an assortment of rods, discs, rectangular prisms and spheres, and there are only three of the usual flat-banana-shaped surplus hard drive magnets. Those magnets are massively strong, just like any other neodymium, but their odd shape makes them unusually fragile. Magnets of more Euclidean-solid shape are more useful.

The ForceField grab bags seem to be the cheapest way to get hold of these things, short of getting old dead hard drives for free and ripping them to bits. But you can do that, too. I’ll show you how in a moment.

Any time people talk about super-powerful magnets they have to show pictures of big metal things dangling, so here some are.

That’s a 15 inch spanner hanging there along with the other ironware. The sphere holding the main string of tools is only about two thirds of the way to holding its maximum load. Getting the four tools in that string balanced was slightly tricky, but not because of any lack of magnet power.

These are a couple of little 3/8th inch disc magnets at work. The one at the top couldn’t hold a lot more. But whaddayawant from something smaller than the average button?

Force Field have some more heavy-lifting pictures on their demo images page.

The earth’s natural magnetic field is about 0.5G, depending on where you are – it’s weaker at the equator and stronger at the poles. It’s also slowly declining at the moment, which is something that it does periodically; geological evidence shows that it’s actually reversed several times over the planet’s life. The mental giants at the Institute for Creation Research use the decline of the field strength to prove that the planet’s only a few thousand years old.

In case you’re wondering, this, like various other of their proofs, doesn’t stand up too well. 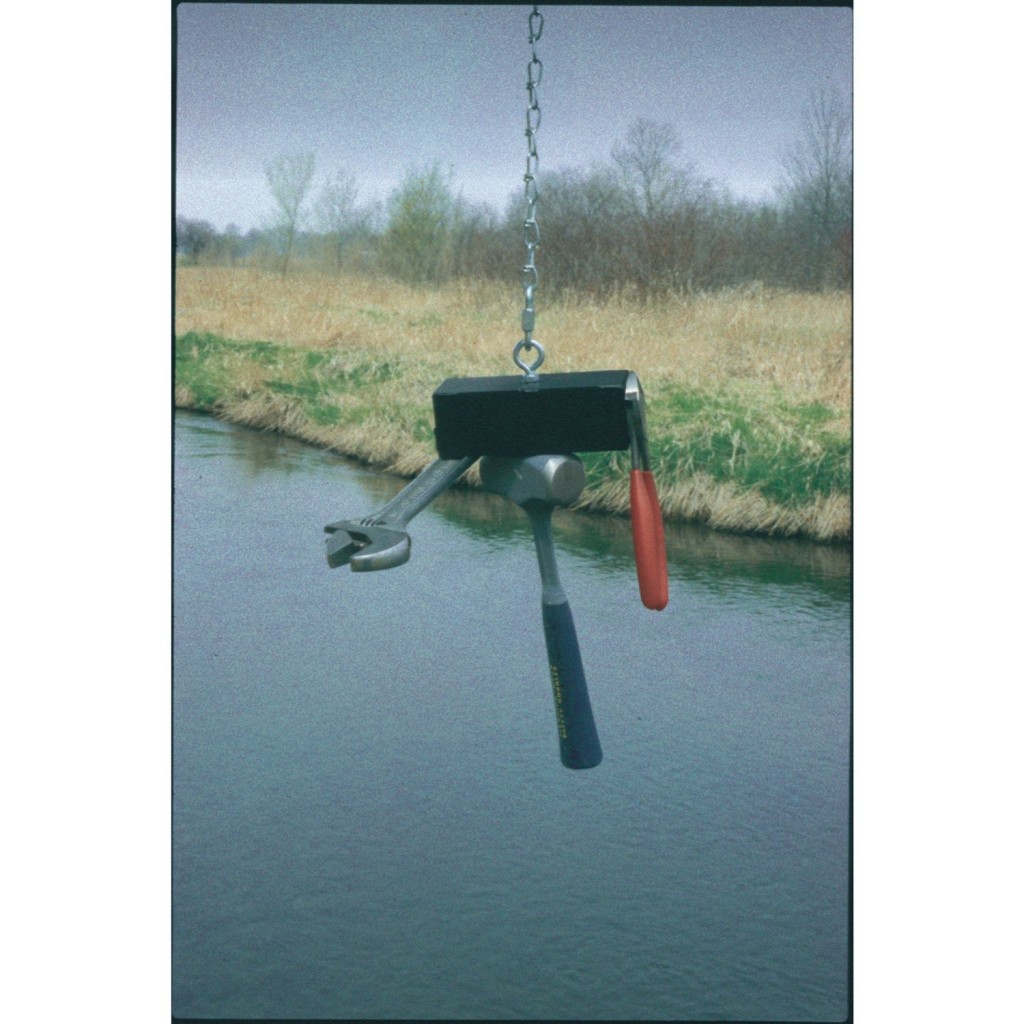 The strongest cheap ferrite magnets have a field strength at their poles of around 1000G, or 0.1T. NIB rare earth magnets, on the other hand, have surface field strength of about 1T. Ten times stronger.

The size of a magnet has a lot to do with the perceived strength of its field, though. None of these magnets are very big, so that inverse-cube-law field strength reduction bites into their power quite quickly.

Chisel the huge ferrite disc magnet off the back of a large dead speaker (if it wasn’t dead before you started chiselling, it sure will be when you’ve finished) and you’ll have a magnet with only about 1000G field strength, measured at the peak strength areas on its poles. It’s a ferrite. That’s all you get.

But big speaker magnets commonly weigh more than a kilogram and are several inches across. The peak strength areas at the poles are thus already a few inches away from the middle of the magnet’s field. In this case, you can move another few inches away and still have 1/8th field strength.

So if you wave one of these big magnets over a pile of nails, they’ll leap up to stick to it from several inches away.

The reason why an MRI machine is a giant contraption that needs liquid nitrogen cooling, rather than a neat little metal-plated lump that you can buy over the Internet, is twofold. It’s partly because the MRI machine is also a sensitive radio receiver, detecting the radio-frequency energy emitted by the magnetic nuclei in the patient’s body when they interact with a strong magnetic field. But it’s mainly because a 1.5 Tesla MRI machine is creating a 1.5 Tesla field over a large enough volume that a patient can be stuck into said field.

(Actually, the coolant around the magnets in an MRI machine is liquid helium; liquid nitrogen is in the outer, warmer vessel of older-model MRI cryostats.)

By the same token, junkyard car-lifting electromagnets only have about 1T field strength, but they generate that field over a big enough volume that their total lifting capacity, for conveniently steel-bodied cars, is massive. The coils under their protective armour draw at least a few kilowatts, and maybe considerably more – 20kW isn’t out of the question for a big car-lifter.

You’re not going to be lifting any Toyotas with a five buck magnet from anywhere. Nails will hop up only about an inch to hit the strongest of the magnets in the ForceField grab bags. In contrast, ferromagnetic objects of all types will fly across a room to make friends with an MRI machine, as occasional accidents attest.

Because of their limited field size, small neodymium super-magnets like these ones aren’t actually much of a problem to deal with, at least as far as messing up your monitors and erasing your credit cards and wiping your video tapes and being hit by flying spanners goes.

Yes, when I had one in my back pocket, I at one point found myself unexpectedly attached to the washing machine. But the rapid diminution of the field strength means that you can hold the strongest of these magnets – the three spheres end-to-end, for instance – in your hand and wave them around a mere foot and a half from a computer monitor, and notice only slight image distortion and discolouration. Move the magnets further away and the effect vanishes.

Touch those same magnets directly to the screen, mind you, and they’ll magnetise the heck out of the shadow mask and leave you degaussing until practically all of the world’s cows have come home, had a nice sleep and gone away again. I own a degaussing wand…

…but I am not confident enough of my skill with it to deliberately Magna-Doodle all over a monitor just so you can see what it looks like. Sorry.

Quite big rare earth magnets can be had, if you want more field range. There’s this one, for instance, which only has about 1.1 times the volume of a ping-pong ball, but which ForceField warn you not to buy unless you’re confident that you know how not to crush, blind or mangle yourself with it.

As far as terrestrial magnetic fields go, 1T is quite strong, but it ain’t much by the standards of the universe. Neutron stars and pulsars (which are spinning neutron stars) have magnetic fields. If they were made of nothing but neutrons then they wouldn’t, but they’ve also got superconducting superfluid protons and various other exotic forms of matter, so they have.

They get just about the whole magnetic field of the normal star they once were, squished into their city-sized diameter.

The magnetic field strength on the surface of a pulsar has to be at least several million Tesla, and may range as high as a thousand million Tesla. That’s more than strong enough to seriously deform electron orbits and make matter do very, very strange things, regardless of whether it’s the sort of matter that normally cares about magnetic fields or not.

This magnetic field would certainly kill anybody who tried to land on a pulsar. Except for the fact that they’d have been very conclusively killed already by radiation and/or gravity gradient. Plus, landing on something that’s spinning fast enough that its surface whips past at kilometres per second – in some cases, thousands of kilometres per second – presents a bit of a challenge in itself.

But, again, I digress.