Rare earth elements are used in many alternative energy, lifestyle, and defense applications. Alternative energy systems such as wind power generation, fuel cells, hydrogen storage, rechargeable batteries, and the permanent magnets used in electric and hybrid-electric vehicles all rely on rare earths. REEs are used as phosphors in many consumer displays and lighting systems, and are used in fluid cracking catalysts and catalytic converters in the oil and automotive industries. REEs are also vital for many defense technologies, including precision guided munitions, targeting lasers, communications systems, airframes and aerospace engines, radar systems, optical equipment, sonar, and electronic countermeasures.

The supply of rare earths is dominated by China, which provides 92-97% of the world’s production. However, China only has 48% of the world’s known reserves of rare earths, according to the USGS Mineral Commodity Summaries Due to growing internal demand, industry consolidation and stricter internal environmental regulations, China has imposed export quotas on rare earths. This creates two separate rare earth markets, one internal Chinese market and one for the Rest of the World (ROW). The Chinese export quota amount therefore defines the majority of REE supply for the ROW, and therefore its pricing. The development of Chinese dominance can be seen on this old chart: 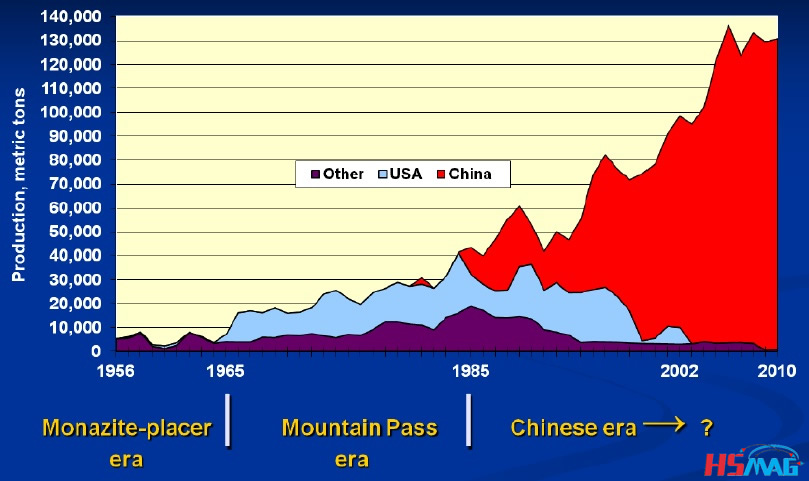 Industry experts are trying to forecast the REE supply and demand figures, but this is not easy, as each rare earth element has different end uses and applications, and is produced in different quantities. This means that certain rare earths, including Neodymium, Europium, Terbium, Dysprosium, and Erbium are and will be in a supply deficit, while more abundant rare earths such as Lanthanum and Cerium will be in surplus.

Personally I think this chart is too positive, as China and the world economy as a whole are slowing down. However, China turning into a more consumer driven economy (as is the intention of national government at least) could mostly neutralize this slow down regarding REEs.

Western LREE production isn’t on schedule and progressing as planned, especially since Molycorp has gone bankrupt in 2015. Furthermore China is regulating its production at the moment as it adjusts or closes illegal REE mining operations. Therefore, my personal assumption is a more moderate growth in demand, and a moderate growth in supply as well.

Nevertheless, the dominance of China in the sector is overwhelming, and this already caused supply problems in the recent past for the rest of the world. This dependence is further reinforced by the current lack of rare earth production infrastructure and processing knowledge in the rest of the world. Also, because each rare earth deposit is unique and contains the various REEs in different proportions, individual elements are produced in different quantities. Besides this, end users require tailor-made rare earth oxides and other related products, therefore limiting flexibility for producers to stockpile or sell to random off takers.

Some rare earths are likely to stay in short supply even though the total supply is forecast to exceed total demand by 2015. The US Department of Energy has identified 5 critical elements that are at a serious supply risk over the next 15 years: Dysprosium (Dy), Terbium (Tb), Neodymium (Nd), Europium (Eu) and Yttrium (Y).

Most of these critical elements are part of the so-called “heavy rare earth elements” or HREEs as they have a bigger mass. These heavy rare earths (HREEs) are much more expensive compared to the most common light rare earths (LREEs) Cerium and Lanthanum:

As clearly can be concluded by seeing these prices, the HREEs are far more rare than the LREEs. Besides a slight hickup in early 2014, rare earth prices have continued to follow their path downwards, and most prices lost about 40-50% since these charts:

After the Chinese export limitations in 2009 caused an escalation in REE prices never seen before as is seen in the last charts, which lasted into 2011, global concern rose since then about the sustaining availability of certain REEs, important to the Western Hemisphere. Two of these critical metals are Dysprosium and Terbium, both heavy REEs.

China has been working hard to maintain their stranglehold onto rare earths, despite WTO rulings. There are rumours that heavy rare earth production in China is decreasing as reserves are depleted. There are however certain signals this could be true, as there are some HREE juniors with extensive Chinese involvement, like Northern Minerals. The chairman of a Chinese conglomerate, Conglin Yue, is also director and largest shareholder (over 50%) of Northern Minerals. The conglomerate is directly linked to one of the biggest state owned miners of rare earths. Rare earth elements

Rare earth elements – Another company, Greenland Resources, also received a lot of Chinese interest on its REE project over the years. China wouldn’t be doing this is if internal supply wasn’t any problem at all in my opinion. If they would be doing this just to maintain a stranglehold over the REE industry, they have to buy out all HREE projects globally. I don’t see this happening with several much larger and profitable North American and European initiatives whose governments would certainly block this as considerable irritation about the Chinese way of handling their REE industry and exports already developed. In 2012, China started stockpiling strategic reserves of REEs, this could have been very well strategic for internal use.

A lot of countries weren’t too pleased with this situation, for example the Defense Department of the USA was considering starting to stockpile some critical metals, including a number of HREEs. It is unknown to me if this development has followed through. Since the summer of 2014, REE prices have come down a lot as shown, rendering virtually all ROW REE projects uneconomic for the time being, making it very hard for juniors to attract funding, and causing Molycorp to go bankrupt this year. The other ROW producer Lynas however seems to operate in a more profitable style, although just marginally positive. It has enough cash to survive another two years at least, and was even looking at acquiring assets of Molycorp at the time of writing (November 2015). Causes for price decks to be this low at the moment are sought in the removal of Chinese export taxes, and the substitution/phasing out of expensive but heavily used HREEs like Dysprosium, the main revenue driver of many ROW HREE projects, which happens inside and outside of China btw. It is more likely that a completely new reality is developing for ROW REE companies at the moment, with only a very select group of REE projects being capable of producing the demanded oxides. At the moment it looks like Lynas is the only company who could buy HREE projects, and add mined mixed concentrates to its LAMP facility in Malaysia, to separate only the most wanted rare earth oxides. Rare earth elements 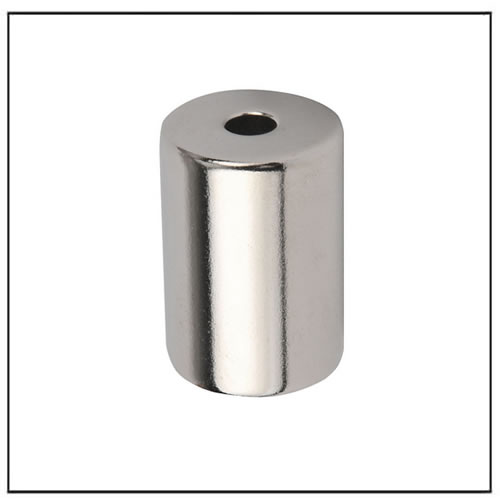 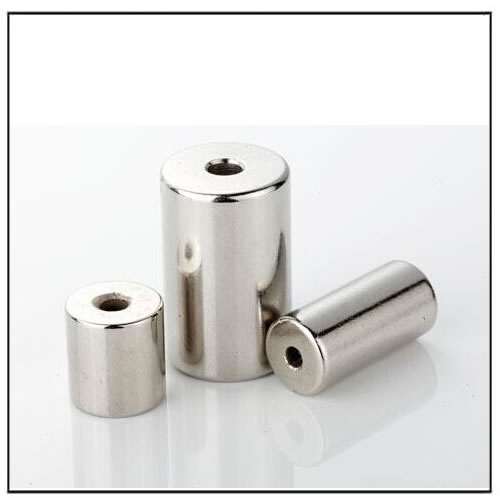 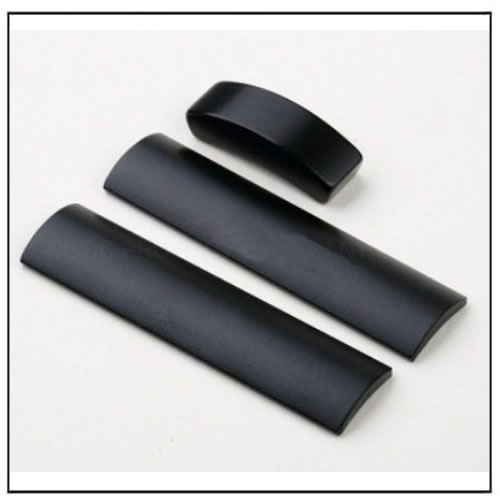