Magnetic skyrmions, a topologically protected magnetic vortex structure (as shown in Figure 1), are very suitable for applications in information storage, logic operations or neural network technology because they can be nanometer-sized, non-volatile and easy to drive. The field is a hot spot of spintronics research in recent years. However, in order to realize the application of magnetic skyrmions in spintronic devices, many problems such as their stability at room temperature, controllable read and write, high density, and compatibility with current magnetic storage structures need to be solved. The physical essence of solving the above problems is to find suitable Dzyaloshinskii-Moriya interaction (DMI) and perpendicular magnetic anisotropy material structures.

Yang Hongxin, a researcher at the Ningbo Institute of Materials Technology and Engineering, Chinese Academy of Sciences, has been working on DMI since 2012. He has cooperated with Professor Mairbek Chshiev, Professor Andrea Thiaville, and Nobel Laureate Professor Albert Fert to develop a first-principles computing interface. The DMI method successfully revealed the physical image of the Fert-Levy type DMI at the interface between ferromagnetic metals and heavy metals from a first-principles perspective (Fig. 2 left) [HY et al. Phys. Rev. Lett. 115, 267210 (2015); O. Boulle, J. Vogel, HY et al. Nature Nanotech. 11, 449 (2016)], the interface between ferromagnetic metals and heavy metals is also the most studied system of topological magnetic structures, however, the Fert-Levy mechanism requires The non-magnetic substrate provides a strong SOC to generate a larger DMI (as shown in the upper left of Figure 2), which leads to the selection of substrate materials from heavy metal materials such as 5d, and the presence of heavy metals generally affects the reading and writing of memory devices. It is incompatible with the magnetic tunnel junction storage structure commonly used in the current industry, which complicates the manufacturing process. Therefore, how to break through the limitation of heavy metals, that is, breaking through the Fert-Levy mechanism to achieve larger DMI, has become a major problem in this field. 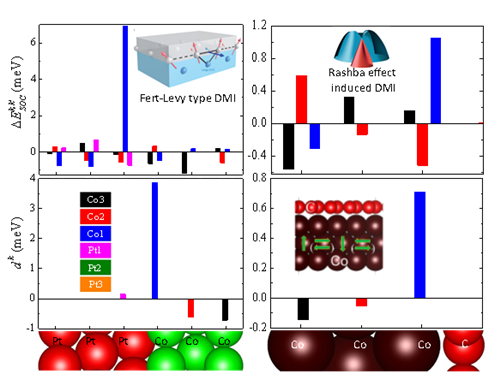 In order to solve this problem, Yang Hongxin, a researcher at the Ningbo Institute of Materials, Chinese Academy of Sciences, and his collaborators have conducted in-depth research on the interface between ferromagnetic metals and graphene. The DMI of meV, and the interface between the three-layer Co and graphene can induce DMI with an intensity of 0.49meV, and its intensity is completely comparable to that of some ferromagnetic metal/heavy metal interfaces. What is more interesting is that the physical mechanism of the system is completely Different from the Fert-Levy type DMI, we can see from Figure 2 that in the Co/Pt structure, the DMI is the largest in the Co layer of the interface ferromagnetic layer, and its energy source, that is, the SOC energy does not come from the Co layer, but from the interface. The noble metal Pt layer; in graphene/Co, the DMI and SOC energy are both in the Co layer. The physical origin of the difference is that the DMI at the graphene/Co interface is the DMI induced by the Rashba effect (right in Figure 2), while Co The /Pt interface is of the Fert-Levy type. In order to verify the DMI induced by the Rashba effect, Yang Hongxin and his collaborators further calculated the energy band changes in different magnetic directions through first-principles and then calculated the Rashba coefficient. The calculated 0.49meV is in the same order as shown in Figure 3 [HY et al. Nature Materials (2018) doi: 10.1038/s41563-018-0079-4].

Simultaneously with the theoretical calculations, Dr. Chen Gong (co-author of this work) and Prof. Andreas Schmid from the Lawrence Berkeley National Laboratory independently measured the DMI on the Co/Graphene interface experimentally. As shown in Figure 4, at the Ru/Co interface, the DMI is -0.05meV, while at the Ru/Co/graphene double interface it is 0.11meV, the DMI at the Co/graphene interface can be calculated to be 0.16meV, which is consistent with the first-principles It is in good agreement with the DMI calculated from the Rashba effect.

Finally, considering that the DMI chirality at the graphene/Co interface is anti-clockwise, and in the graphene/Ni structure, when the thickness of Ni is less than 2 atomic layers, the DMI is clockwise, so the grphene/Ni can be reversed Stacking the structure to Ni/graphene to reverse its DMI chirality, thereby realizing the enhancement of DMI in graphene/Co/Ni/graphene multilayer structure, and more interestingly, in this structure, the perpendicular magnetic anisotropy also increases with the anisotropy. The number of prime junctions increases with the increase of the number of prime junctions, realizing the simultaneous regulation of perpendicular magnetic anisotropy and DMI by multi-layer stacking, thus providing more options for the regulation of topological magnetic structures (as shown in Figure 5). 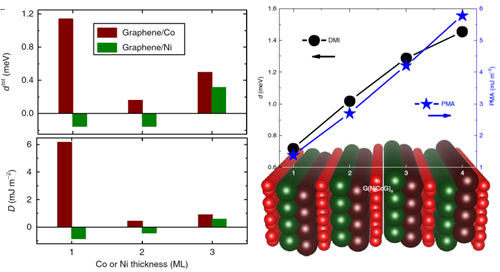 In summary, the graphene and ferromagnetic metal interface can achieve large DMI, which is different from the Fert-Levy model, and its physical mechanism is induced by the Rashba effect, which breaks through the dependence of interface DMI on heavy metals. In addition, considering that the Co/graphene interface also has a huge perpendicular magnetic anisotropy [HY et al. Nano letters 16, 145 (2015)], and both can be easily regulated at the Co/graphene interface, it is foreseeable that the This series of work will provide more possibilities for the scientific research and application of graphene spintronics and topological magnetic structure spin-orbit electronics.

The theoretical part of the work is carried out by researcher Yang Hongxin from the Ningbo Institute of Materials Science, Chinese Academy of Sciences, and Professor Mairbek Chshiev from the SPINTEC laboratory of the University of Grenoble, the French National Center for Scientific Research and the French Atomic Energy Center, and the French National Center for Scientific Research and Thales Joint Physics Laboratory. Professor Albert Fert (Nobel Prize in Physics 2007) and others cooperated to complete the experiment. The experimental part was completed by Dr. Chen Gong (co-first author) of Molecular Foundry of Lawrence Berkeley National Laboratory and Professor Andreas Schmid. This work was supported by the European Union’s Horizon 2020 Research and Innovation Programme (Graphene Flagship) as well as French ANR ULTRASKY, SOSPIN, Genci-Cines projects, US Office of Science, Office of Basic Energy Sciences, DOE, Office of the President Multicampus Research Programs and Initiative and other projects and the support of Ningbo 3315 project. Researcher Yang Hongxin would also like to thank the Key Laboratory of Magnetic Materials and Devices, Chinese Academy of Sciences, Ningbo Institute of Materials, Chinese Academy of Sciences and Chinese Academy of Sciences for their support.