Magnetic encoder detects rotational position information as changes of the magnetic field, converts them into electrical signals, and outputs them.
Magnetic encoder with a Shaft-End configuration that combines a magnet magnetized in the radial direction and a Hall element that detects the strength of the horizontal magnetic field is robust against misalignment.
Magnetic encoders are used for applications that place importance on robust against environment, small size and lightweight, and high reliability.
Magnetic encoders are beginning to be used even in the market occupied by optical encoders because their accuracy and resolution are improved and the hollow through shaft can be supported.

Hall elements used in magnetic encoders are made of semiconductor materials.
The semiconductor materials used in Hall elements are mainly compound semiconductors such as highly sensitive indium antimony (InSb), gallium arsenide (GaAs) with stable temperature characteristics, and indium arsenide (InAs) with well-balanced sensitivity and temperature characteristics. And silicon (Si) that can be mounted on the IC chip is used, too.
In addition, there are two types of Hall elements that can detect the magnetic field strength in the vertical direction and the type that can detect the magnetic field strength in the horizontal direction.
(For a detailed explanation of the Hall element, please refer to ” Basic knowledge of magnetic sensors ” if you are interested.)

Magnetic encoders generally use cylindrical permanent magnets. There are two types of magnetizing directions for permanent magnets: radial direction and plane direction (or axial direction).
As long as the conditions for the magnetic flux density required to operate as an encoder are satisfied, the magnetic material and dimensions can be freely selected.
Generally, samarium-cobalt (SmCo) – based magnets, which have good temperature characteristics, neodymium (Ne-Fe-B) – based magnets, which are suitable for downsizing and lightweight, and inexpensive ferrite – based magnets are selected according to the purpose.
Figure 5-2a. Radially magnetized magnet 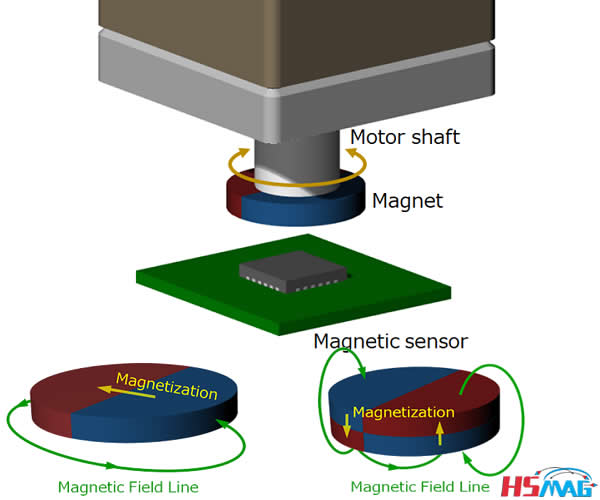 In the following, we will explain the principle of a magnetic encoder consisting of a magnet magnetized in the radial direction and a Hall element that detects the strength of the horizontal magnetic field.

Figure 5-6b. Lissajous figure of magnetic field strength
When the X-axis component is Bx and the Y-axis component is By, the rotation angle θ can be obtained as an absolute angle by calculating arctan(By/Bx). This can be output with the absolute method introduced in Part 3. That is, a magnetic encoder is essentially an absolute angle-sensing encoder. In addition, by converting the absolute angle information into A-phase, B-phase, and Z-phase information, it can be output as a pulse signal in the incremental method/pseudo-absolute method. At this time, if the resolution of absolute angle information is sufficiently high, it is possible to output a pulse signal of any resolution such as 360 ppr, 1000 ppr, 2500 ppr, 4000 ppr.

A rotation angle sensor IC is an electronic component that incorporates all the magnetic sensors, AD converters, and angle calculation circuits that are the necessary components for a magnetic encoder.
It is possible to realize a small magnetic encoder with a very simple structure of a rotation angle sensor IC and a permanent magnet.
It is widely used in consumer, industrial and automotive applications.

Advantages and applications of magnetic encoder

Another advantage is that it is possible to manufacture an encoder that outputs an absolute angle with a very simple structure of a rotation angle sensor IC and a permanent magnet. Therefore, it is suitable for applications that require small size, light weight, and high reliability. For example, it is used in machine tools that use small-diameter motors and factory automation machines that require durability.