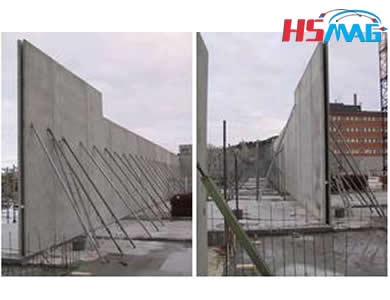 Pre-cast concrete formwork wall panels
Makes use of the on-sight constructed walls benefits when it comes to power transference between parts of frames and the pre manufactured walls rationality and fine surface.
The pre-cast composite wall elements consist of two separately casted elements with a thickness of 50 mm, adherent with infused lattice girder reinforcements. When the walls are founded against steel forms you get a nice surface that demands minimal after treatment. The walls are already reinforced when delivered; the only thing that needs to be complimented is a wire-mesh reinforcement that will be put in the seam between the walls. We can manufacture sizes from 180 -400 mm, and then we cast them at the construction site. The space inside the wall, where the infusing is made, is 80 -300 mm depending on the thickness of the wall. Even in pre-cast concrete formwork wall panels, we infuse necessary electrical boxes, duct formers, cases for form ties and more.
If you would like some more help with construction, advice or smart solutions, don hesitate to give us a call The earlier the better.