Correlated Magnetics Research makes Polymagnets with precision auto-alignment by applying Barker correlation codes and techniques commonly used in the world of radar. Here is a simplified explanation, including a bit of background information about correlation codes.

When mathematical waves or curves such as sine waves are in phase (i.e., when they line up), they are additive, meaning the sum of all the components is positive. Another way to say it is that if you add a mathematical curve to itself, the values reinforce one another. When they are out of phase, that is if you shift the curve and add the original curve to the shifted version, they can actually cancel each other out. 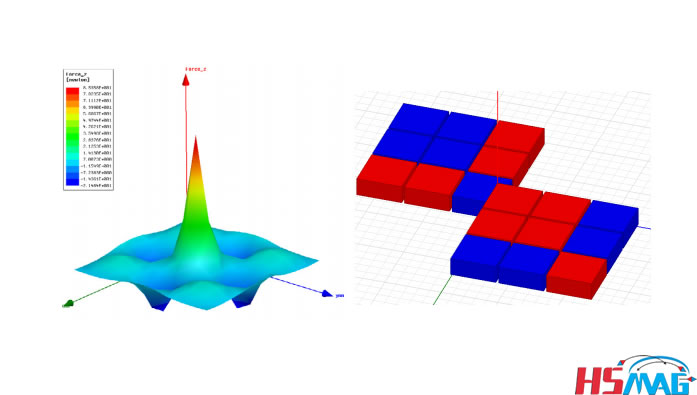 Polymagnet Alignment How it works

To further expand on this notion, imagine adding a sine wave to itself. All the 1/-1/1s become 1/-2/2s. Shift the
curve by 1 unit, then add it to the original unshifted curve, and you get 0/0/0. Similarly, you can take patterns that have similar +1/-1 structures of varying length, and when aligned, the sum of all units equals the total number of units. When shifted or offset, the sum of all units is much lower (0 or 1). The Barker 7 sequence, for example, has 7 units. When aligned, the sum is 7; when offset, the sum is 0 or -1.

Barker correlation codes are unique sequences of +1s and -1s in a function such that when it is lined up with a copy of itself, the two functions resonate strongly with one another as describe above, but when they are shifted, this resonance falls off dramatically. These sums in Polymagnets lead to preferred alignment, as described below.

The patented method used by Correlated Magnetics to program magnets involves applying these Barker code behaviors to pattern of magnetic north and south poles, which is also patented. Instead of curves being in and out of phase by time (communications theory), the patterns of magnetic north and south poles can be in and out of phase by position — physically shifting or offsetting the poles past each other. When they all line up, they can attract one another. In the other positions, cancellation or repulsion occurs, depending on the
pattern.

Applying Barker codes to program their magnets, Correlated Magnetics uses patterns of magnetic north and south poles instead of 1s and -1s to program how tightly the magnets attract and hold one another, how abruptly the attraction falls off as they are shifted with respect to one another, and more. Correlated Magnetics deliberately shifts the positions of several N and S poles on two magnets according to Barker code patterns such that the magnets attract one another strongly when perfectly aligned, yet repel when slightly shifted. The pattern of norths and souths can even be reversed, causing the magnets to repel one another.