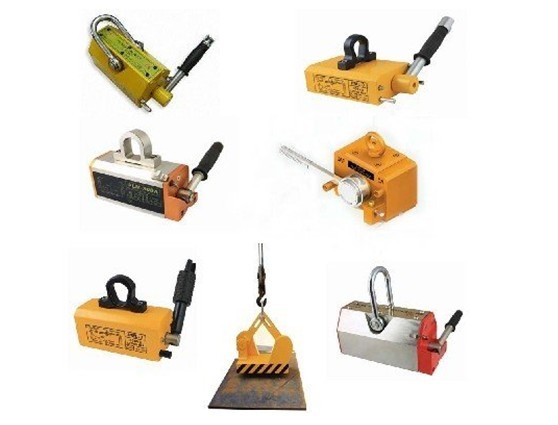 Permanent Magnetic Lifters are mainly used for handling of steel plates, blocks, press moulds and loading / unloading in machines during handling operation. They can hoist moving iron block, and other magnetic material. They are easy for operation, safe in handling. Hence they are widely used as hoisting devices in factories, docks, warehouses and transportation industries. By using them, you can improve your working condition and increase your working efficiency.

Features:
Flat surface lifting capacity of 100kgs
Cylindrical surface lifting capacity of 50kgs
Does not need Electrical Energy
Forged hook for high mechanical strength and durability
Precision machined Assembly block in single piece to enhance efficiency
3 times factor of safety to meet the safety standards as per international standards for under the hook devices
Test certificate for safety factor from government approved third party
No Maintenance and Operating cost
No damage to the work piece being lifted
Very Compact 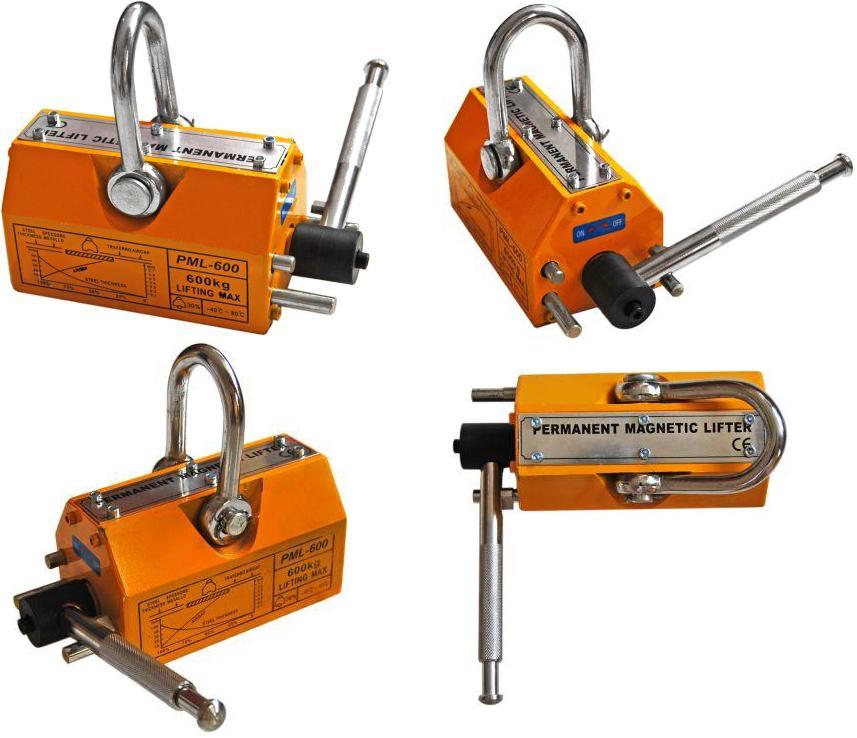 Construction:
Permanent Magnet Lifter has strong magnetic field path produced by NdFeB Magnetic materials.” On” and “Off” of the magnetic path is controlled by turning the lever manually. There are shackles on the top of Magnetic Lifter for lifting.

Operating Instructions
The work piece surface (magnetic ferrous surface) and magnet pole surface must be clean and smooth to achieve maximum efficiency. Ground and machined surface are ideal but a good clean surface on a ferrous or casting is acceptable provided a sufficiently flat area available for good magnetic contract with the work piece
There should be no air gap / inclusions between the magnet pole and the job surface
Place the magnet on the ferrous surface. Unlock the lever by pulling it out and then turn it to the “ON“ position. Once it is made “ON”, lock it by releasing it. For making it “OFF”, please follow the similar procedure. (Do not place on wooden surface OR non-magnetic surface – it will not be possible to operate Lever to “ON” position)
Move the load smoothly, avoid shocks and collisions
To place / drop the lifted material, operate the lever to the “OFF” position

When not in use:
Apply Grease / Oil on Magnetic Poles surface to prevent it from rusting
Place it on thick wooden plank to safeguard its Magnetic poles from any damages, scratches etc

Safety Instructions:
Place the magnet on the Ferrous Surface in “OFF” position and then make it “ON”. Do not make it ON without keeping it on ferrous surface
The magnet is to be placed on the center, i.e. centering to the center of gravity of the load and then lift
While handling the load, no person should be allowed in the immediate danger zone
Ensure that the lever is made “OFF” after resting the load at desired place in balance position

Important Factors for the Safe Operation of Lifting Devices
Load characteristics other than just weight must be considered in order to determine the weight that any magnetic lifter can lift. This statement is true for any lifting magnet because they all operate on the same fundamental laws of Physics. Magnetic power is pictured as lines of force flowing from North to South Pole. Anything that limits the flow of these magnetic lines of force obviously reduces the magnet’s lifting ability. There are four important factors which limit the flow of these lines of force.

Load Surface Conditions
Magnetic lines of force do not flow easily through air, they need iron in order to flow freely. Therefore, anything that creates an air gap between a magnet and the load, limits the flow of magnetic force and thus reduces the lifting capacity of a magnet. Paper, dirt, rust, paint and scale act in the same way as air, so also a rough surface finish between the magnet and the load.

Load Length and Width
When the length or width of a load increases, it ceases to lie flat and the load begins to drop at the edges. The drooping/sagging of the load can create an air gap between the load and the magnet. If this occurs then the lifting capacity of the magnet is reduced. 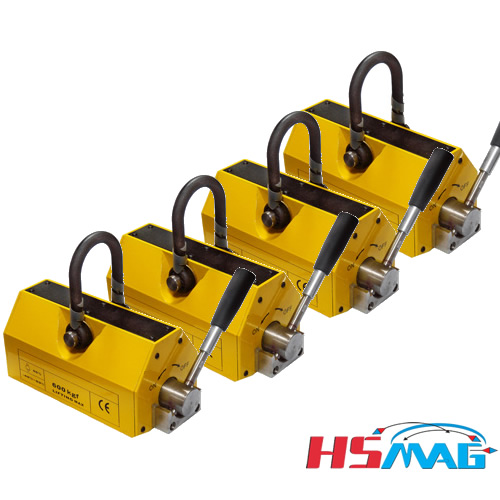 Load Thickness
Magnetic lines of force are more effective when they flow through iron instead of air. The thicker the load, the more the lines of magnetic force. After a certain thickness of load, no more lines of force will flow because the magnet has reached its full capacity. Thin material (load) means less iron available and thus fewer lines of magnetic force flow from the magnet into the load. Therefore, the lifting ability of the magnet is reduced. Every magnet is rated for minimum thickness of load to reach full lifting capacity. Below such thickness of load will de rate the lifting capacity of the magnet. In general, it can be said the load must be thicker than the width of one of the magnet poles.

Why HSMAG’s Permanent Magnetic Lifters?
These magnetic Lifters are ruggedly built
High Lifting Capacity with respect to size & weight
Works without Electrical Power
No maintenance and operational costs
Made with high energy rare earth magnets (NdFeB)
Mechanical Switching by turning a lever with a lock
System against switching off accidentally
No damage to the work piece being lifted
Easily transportable