If one day we could actually live on the moon, what would be the most important thing?

Yes, it is oxygen.

“Produce the first mouthful of oxygen for the Chinese on the moon as soon as possible”, this is the mouth of Guo Linli, a researcher at the 508 Institute of the Fifth Academy of Aeronautics of China.

We all know the moon, and it is not that we have not explored it. It can be said that we have been on the road of exploration since we discovered the moon. The moon is in the habitable zone of the solar system. Although it is also very close to the earth, there is no life on the moon at present.

So does oxygen exist?
First, the temperature difference between day and night on the Moon is huge.

Second, there is water on the moon.

But water is not the same as water on Earth. Water on the moon is solid water and gaseous water.

Finally, there is no atmosphere on the Moon.

The lunar surface contains a lot of oxygen 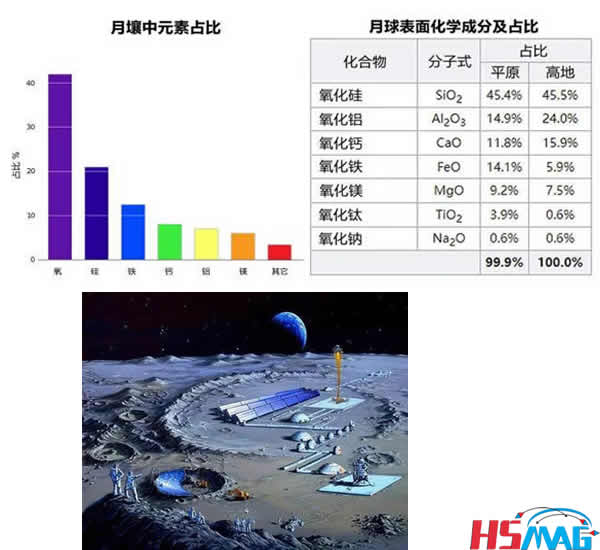 In October 2021, the Australian Space Agency and NASA signed an agreement to send an Australian-made rover to the moon.

The goal is to collect lunar rocks that could eventually provide breathable oxygen on the moon.

According to research, the moon actually has a lot of oxygen, it’s just not in gaseous form. Instead, it was trapped in a layer of rock and fine dust covering the lunar surface.

From this picture, we can see that the proportion of oxygen in the lunar soil has reached 40%, and whether it is the plains or highlands on the moon, more than 99.9% of the materials contain oxygen.

So how much oxygen can the moon produce? It is estimated that every cubic meter of lunar regolith contains an average of 1.4 tons of minerals, including 630 kilograms of oxygen.

Even NASA said: Assuming the average depth of the lunar regolith reaches 10 meters, we can extract enough oxygen from it. And the oxygen on these surfaces is enough to support about 8 billion people on Earth for 100,000 years.

This technology can heat and melt lunar soil or rock for electrolysis, and oxygen is released from the melt in the form of bubbles. When heated to 1600-2500 °C, the oxygen-containing rock mass can be decomposed to generate oxygen.

Although this technical step is simple, does not require any additional reagents, and does not consider the recovery and recycling of materials, in addition to oxygen production, the preparation of silicon, iron and other metal materials with higher purity can also be achieved.

But we ignore its condition?

This technology requires high temperature conditions, so it has great danger, and the advantage is high efficiency, 20~30 kg of oxygen can be prepared for 100 kg of sample.

Second, we don’t have to worry about running out of oxygen on the moon at all. Because there is more sunlight on the moon than on Earth, we can fully utilize the principle of lenses to concentrate heat.

Although there is a relatively big problem in the production of oxygen from the lunar soil, we have always faced difficulties in the development of spaceflight.

In fact, to put it bluntly, the effective load of the chemical-powered rockets we use is limited, and it is impossible for us to send a large amount of water and oxygen to the moon all the way.

Why produce oxygen on the moon?
The idea of ​​making oxygen on the moon sounds like a fantasy, but it’s about to become a reality. This scientific research is laying a solid foundation for my country to establish a lunar base.

And at present, researcher Guo Linli introduced that the 511 Institute of the Fifth Academy of Aerospace Engineering has used the Chang’e detector platform and applied a small reactor to carry out the oxygen production experiment on the lunar surface, which has achieved certain results.

In the future, scientists in our country will make persistent efforts to try to prepare their own first breath of oxygen on the moon.

Oxygen is the key to our breathing, whether it’s a space mission or another cosmic mission, that’s something to consider. If we were to build a base on the moon, the situation would be different, so we would need to make a lot of oxygen.

Let’s just say that the lunar oxygen production technology is a key step towards the moon. We must make breakthroughs here. I believe that more countries in the world will explore space with us and make progress together.

HOW OUR MAGNETIC COUPLING IS MADE

Up to 75% depend on China! U.S. no longer restricts imports of neodymium magnets