In the year 1842, Michael Faraday was stated that the optical isolator operation depends on the Faraday Effect. This effect refers to a fact that the polarized light plane turns when the light energy transmits through the glass that can be exposed toward a magnetic field. The direction of rotation mainly depends on the magnetic field as an alternative of the light transmission direction.

The optical devices as well as connectors in a fiber optic system cause some effects like absorption, and reflection of the optical signal on the o/p of the transmitter. So, these effects may cause light energy. These effects may cause light energy to be reproduced back at the supply and obstruct with supply function. To overcome the interference effects, an optical diode or optical-isolator is used.

What is an Optical Isolator?
An optical isolator is also known as an optical diode, photocoupler, an optocoupler. It is a passive magneto-optic device, and the main function of this optical component is to permit light transmission in one direction only. So it plays a main role while preventing unnecessary feedback to an optical oscillator namely laser cavity. The working of this component mainly depends on the Faraday’s effect which is used in the main component like Faraday rotor.

The polarization independent isolator is made of three parts, an input birefringent wedge, a Faraday rotator, and an output birefringent wedge. Typically collimators are used on either side of the isolator. In the transmitted direction, the beam is split and then combined and focused into the output collimator. In the isolated direction the beam is split, and then diverged, so it does not focus on the collimator.

Conclusion
From the text, we can get basic Knowledge of optical isolator. It plays an important role in fiber optic system by stopping back-reflection and scattered light from reaching sensitive components, particularly lasers. For more information about optical isolator, you can visit Fiberstore.

Working Principle
An optical isolator includes three main components namely a Faraday rotator, i/p polarizer, & an o/p polarizer. The block diagram representation is shown below. The working of this is like when light passes through the i/p polarizer in the forward direction & turn into polarized within the vertical plane. The operation modes of this isolator are classified into two types based on the different directions of light such as forward mode & backward mode. 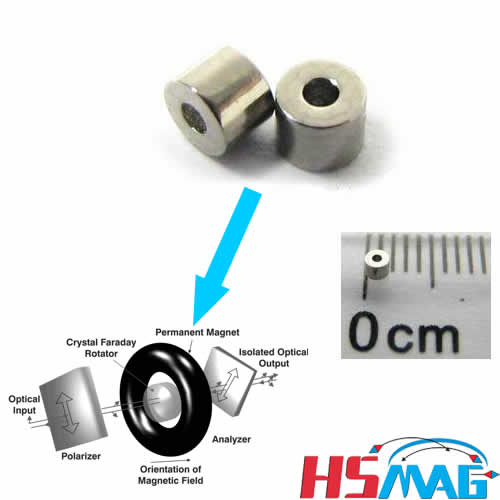 Polarized Type Optical-Isolator
This isolator uses the polarization axis to keep light transmit in one direction. It allows light to transmit in forwarding direction, however, prohibits every light beam to transmit back. Also, there are dependent and independent polarized optical-isolators. The latter is more complicated and often used in EDFA optical amplifier.

Magnetic Type Optical-Isolator
This type of isolator is also named as the polarized optical-isolator in a new face. It pressures the magnetic element of a Faraday rotator, which is usually a rod designed with a magnetic crystal beneath the strong magnetic field through Faraday Effect.