The advantage of the Off-Axis configuration is that both ends of the rotary shaft can be freed, the encoder as a whole can be made thinner, and hollow through shafts can be supported.
The Off-Axis configuration magnetic encoder needs correction to make the Lissajous figure a perfect circle, because the Lissajous figure becomes a distorted ellipse.
For correction, true angle information is necessary to know how much the rotation angle θ includes angular error.

In Part 5 Principles and Advantages of Magnetic Encoders, I explained that the Shaft-End configuration, in which the center of the rotating shaft, the permanent magnet, and the Hall element are aligned, is the ideal configuration for magnetic encoders.
This is because, theoretically, the Lissajous figure becomes a perfect circle and the angular error becomes zero. Therefore, it has a mechanical disadvantage that the tip of the rotating shaft cannot be used for other purposes.
To solve this problem, there is a method in which the tip of the rotary shaft is free by using a configuration in which the encoder is intentionally displaced from the center of the rotary shaft. This method is called Off-Axis configuration.

In the following, we will explain using the radial type. You can freely select the magnet material and dimensions as long as the magnetic flux density required to operate as an encoder is satisfied. Usually, samarium cobalt (SmCo), which has good temperature characteristics, neodymium (Ne-Fe-B), which is suitable for small size and light weight, and inexpensive ferrite magnet are selected according to the purpose.

The structure is such that the rotary shaft penetrates through the hole of the ring-shaped permanent magnet.
The Off-Axis configuration is a structure in which the Hall element is intentionally displaced from the center of the rotation axis.
Below, we describe the Off-Axis configuration with an example of placing a Hall element next to a ring magnet to detect the strength of the horizontal magnetic field.

The mechanical advantage of the Off-Axis configuration is that the tip of the rotating shaft can be freed. Another advantage is that the encoder can be made thinner, and a hollow shaft can be used as a rotary shaft to pass cutting oil and cables inside to save space. 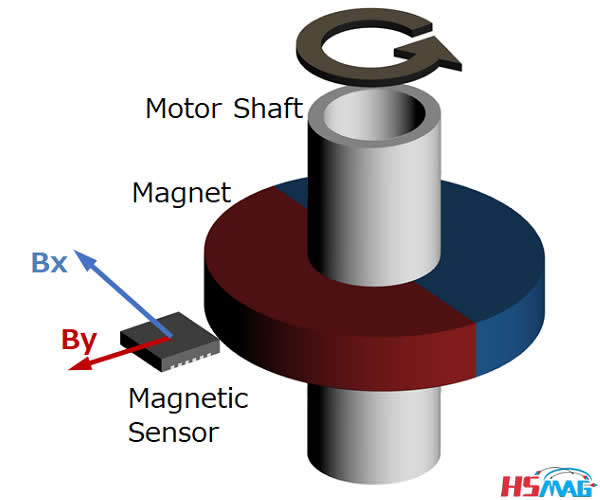 Change in magnetic field distribution due to rotational motion

There are two reasons. One is that the magnetic field strength and direction of the ring magnet rotate while changing simultaneously, and the other is that the rotation angle of the ring magnet does not match the direction of the magnetic field input to the Hall element. When the X-axis component is Bx and the Y-axis component is By, the rotation angle θ can be obtained as an absolute angle by the calculation of arctan(By/Bx). Since the Lissajous figure with Off-Axis configuration is distorted, the rotation angle θ contains a large angle error.

Correcting the angle information of the Hall element

The magnetic encoder has an excellent advantage of being robust in an environment contaminated with dust, oil, water and so on because it has a mechanism to detect changes in the magnetic field. Thus, it is suitable for use in the environment with a lot of dust, oil, and water.
Furthermore, the mechanical advantage of the Off-Axis configuration is that the tip of the rotating shaft can be freed.
Therefore, it is used in main motors of industrial sewing machines and motors with electromagnetic brakes. It is also suitable for applications where the rotating shaft is a hollow shaft and cutting oil and cables are passed inside. It is used in machine tool spindle motors and robot arms.