In order to solve the above problems, doctoral students Yu Zhe, Researcher Shang Jie and Researcher Li Runwei used liquid metal as a conductive filler, and at the same time built a “gourd string”-shaped conductive network structure in the conductor to release the strain and further improve its strain stability. The results show that the electrical conductivity of the stretchable conductive material can reach the conductor range (greater than 1000 S/cm), and can achieve more than 1000% stretching. More importantly, the resistance fluctuation is less than 4% when stretched by 100%. , the change rate of the resistance of the traditional stretchable conductive material is reduced by 2-3 orders of magnitude, and the stability of the stretchable conductor under large strain is realized. As shown in Figure 1a. The result was published in Advanced Electronic Materials (Adv. Electron. Mater. 2018, 4, 1800137) as a bottom cover article. Further, using the above stretchable conductive material as ink, a direct-writing printer was built, and the direct printing and patterning design of this material on an elastic substrate was realized. As shown in Figure 1b, the printed elastic heating device was designed with Good thermal stability. This work provides new materials and technologies for the fabrication of flexible wearable electronic devices. The results were published in Advanced Materials Technologies (Adv. Mater. Technol. 2018, 3, 1800435).

A flexible circuit is a special circuit created on a flexible substrate. At present, there are two major challenges in its application: one is poor fatigue characteristics, and it is easy to break and fail under repeated cyclic strain; the other is that it cannot be recycled, and traditional recycling methods such as incineration and pickling pollute the environment. In response to the above challenges, Ph.D. students Li Fari, associate researcher Liu Yiwei and researcher Li Runwei prepared liquid metal-based flexible circuits on paper to replace traditional copper, aluminum, silver and other circuits, which not only solved the problem of poor bending fatigue, but also solved the problem of poor bending fatigue. Recycling (Figure 2 shows the circuit prepared with liquid metal before and after recycling), which realizes the greening of the whole life cycle of paper-based circuits in manufacturing, use, and recycling. The circuit line width can be adjusted between 10μm-200μm, and through up to 10,000 double-fold tests, it is found that the maximum change rate of the circuit resistance is only 4%, which has good strain stability. In addition, the paper-based circuit has a good heat dissipation function. Experiments show that the temperature of the LED lamp operating on the liquid metal-based paper-based circuit is significantly lower than that of the LED lamp on the surface of the pure paper. This work provides a new method for the development of green and recyclable flexible circuits, and the results were published in Advanced Materials Technologies (Adv. Mater. Technol. 2018, 1800131).

It is the dream of many disabled people to make prosthetic limbs tactile, and electronic skin is such a system that can make human prosthetic limbs tactile. However, most electronic skins can only convert external stimuli into analog signals, and cannot convert external stimuli into physiological pulses like human skin, and transmit them precisely to the nervous system to the brain. In response to this problem, doctoral students Wu Yuanzhao, associate researcher Liu Yiwei and researcher Li Runwei cleverly used the inductor-capacitor (LC) oscillation mechanism to design the circuit (as shown in Figure 3a). When the external stress/strain causes the inductance value to change, the LC circuit will The frequency will change, so as to obtain the corresponding relationship between the applied stress/strain and the frequency. By further optimizing the LC resonance circuit, it can work within the physiological pulse frequency range of the human body. In addition, an “Air gap” structure was also designed (as shown in Figure 3a), and amorphous wire was used as the magnetic core to improve its performance, and a digital flexible haptic with a sensitivity of 4.4kPa-1 and a detection limit of 10μN (equivalent to 0.3Pa) was obtained. The sensor device (as shown in Figure 3b), and by optimizing the modulus and structure of the sensor, can be compatible with a wide detection range, which can sense not only weak mosquitoes and pulses, but also the pressure when lifting heavy objects. This work provides a new approach for developing digital biomimetic electronic skin. The results were published in Science Robotics (Sci. Robot. 2018, 3, eaat0429). 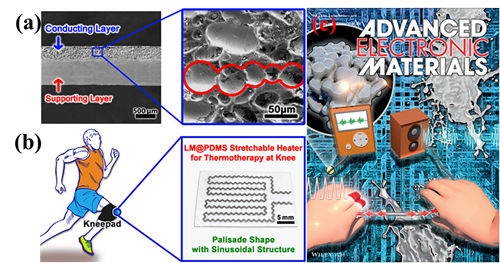