Much Stronger of Rubber Coated Neodymium Magnet: 18.5lb Vertical Magnetic Pull Force On Base of 0.33”(10mm) Thickness Steel Plate due to Neodymium Magnet N42.
No scratch and bigger friction of magnet: the rubber can protect the magnet from damage , avoid scratch of painting surface and limit slipping the magnet on smooth surface.
Multi-Use of round strong magnet :1/4″-20 Male thread Stud, directly screw into the threaded hole of the fixed body or putting through a hole and fastening with a nut to attach any hardware assembly. Great for camera , video, display panel , automatic equipment, tools and machines
Good Corrosion-Resistance of rubber magnet: rubber coate is water resistant and have a good corrosion-resistance. Loss of magnetic properties no more than 2% within 10 years
Package Includes: 4pcs Magnet Base +Spring Washer+Flat Washer+Nut included 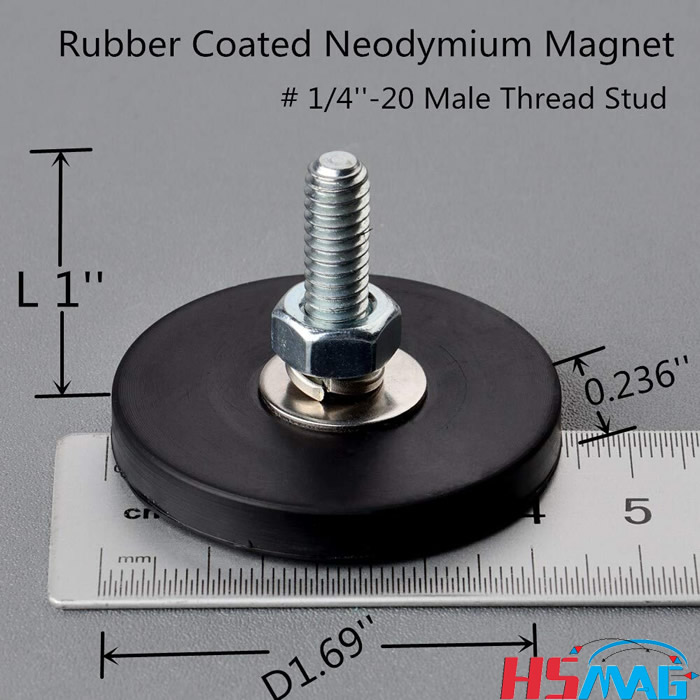 When they first arrived, I placed the magnets on my refrigerator and the connection was very solid. I felt confident that this would be able to secure my gear. However, much later on when I tried using the washers there was no attraction at all. It took me by surprise, such that my initial thought was the washers weren’t steel, but the other magnets on my refrigerator worked fine. Rubber Coating Neodymium Magnet Base

As the rubber on the sides of the magnet shifted, I could feel / see how thin the rubber was on the bottom, and I noticed that there were 6 small indentations in the rubber arranged in a circle. So I used the edge of the washer, and noticed that only the center of those small circles had magnetic pull. Between each circle, at the center of the platform, towards its edges, and on the reverse side there was no magnetic pull that I could physically discern. I am certain that this magnet isn’t really a magnet. Instead, it’s what I estimate to be a 2mm thick non-magnetic material that six 10mm x 1mm magnets are affixed to, enclosed in 3mm of rubber, with the thicker rubber being on the non-magnetic side / top-side of the base. The small 10mm magnets aren’t even strong enough to pull through the non-magnetic material they are affixed to.

On the underside, the washers I am using fall perfectly in a dead zone. Even when I tried larger diameter washers, the balance of magnetic force along the weaker edges of the small magnets resulted in weak attraction. Off-centering the washer it fully contacts with two of those magnets at best and feels like much less than 1 pound of magnetic force. So for my application they are completely unusable. Unfortunately I destroyed / threw away the shipping packaging when I first thought the magnet was secure, so it ends up being a relatively pricey learning experience.

For what its worth, I can see a lot of thought and consideration went into the design. The non-magnetic material on one side with thicker rubber, I believe is intended to protect the items mounted on it from impact and magnetic interference. The thinner rubber on the underside is to protect the surface the magnet is on, with minimal interruption / distance. Using smaller magnets they effectively minimized magnetic interference (because the magnetic field of the small magnets is relatively short / small) while maximizing pull force (as they work in concert). So, if you’re using them on a large surface area, they’re probably perfect.

I will agree with a previous reviewer that these are not a single solid magnet, but rather a bunch of smaller ones, (appears to be six smaller about 10mm or less magnets) in a mold of sorts that has been coated in the rubber. I have had issues with this also as it literally will choose depending on orientation what it will grab onto and stay there. I have had partial grip(about 2/3s of the surface of the magnet face) in contact with a metal plate and it was rotating with the camera I had mounted on it(a gopro session 4).
Don’t get me wrong, for me it’s adequate but for others it might be a deal breaker. I have put it on a solid metal desk that had 14ga steel as a top and it grabbed great and trying to pull it off straight up is pretty difficult, but shear strength is abysmal, also the rubber coating appears to be sticking to the table when you pull at an angle to remove the magnet base from the table like the magnets are pulling the rubber down with them.

BOTTOM LINE: It does what it says and theRubber Coating Neodymium Magnet Base w/ 1/4-20 stud with washer and nut do a great job, if you tighten them down. Most cameras utilize this pitch thread so you can mount tons of things to them not just cameras.
Of note also, the packaging was top notch, they did not allow this to get damaged, even from Fedex, though I don’t remember who delivered it LOL!!!
Came quick and was very reasonable price. Get em you wont be dissapointed… I have the Mags at work so don’t have a photo now, but I have used the magnets to hold a special made mount that uses this magnet to hold it in place while using a Okuma CNC Lathe. I have some videos of it it action…