Most permanent magnets have a direction of anisotropy, where the magnetic domains are forced into a single direction during the production of the magnetic material. The magnet must then be magnetized in the direction of anisotropy, but being one-dimensional does not mean that the location of magnetic North has been decided. The magnet can be magnetized in either North or South “up” in the direction of anisotropy and this magnetization can occur different in each domain. Therefore, for any given piece of anisotropic permanent magnetic material a decision can be made to magnetize the magnet as a multi-pole magnet. Where there are any given number of North or South poles on a single face, as long as they all face the same direction. There will be an interpolar zone (or dead transition zone) between each pole as the magnetic direction transitions from North to South on the face. This is expressed in the models as air space between the multiple magnetic poles for simplicity.

Magnetizing a permanent magnetic material as a multipole magnet, as opposed to magnetizing the entire magnet in one direction, can have several advantages if designed correctly, including increased holding force, self alignment of components due to attraction and repulsion, decreased target thickness, and lower flux density levels in the air gap. 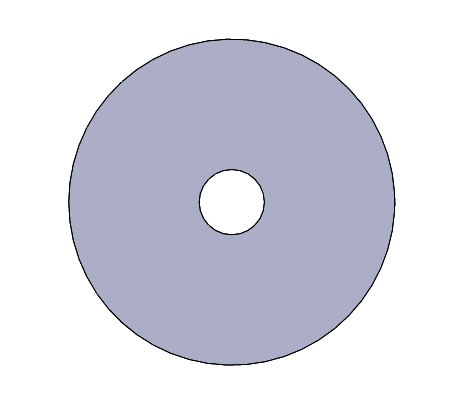 By taking a standard ring magnet, shown above, and wrapping a magnetizing coil into multiple sections, instead of a single coil, we can achieve an alternating pole magnetization that modifies some properties of the magnet, shown below. 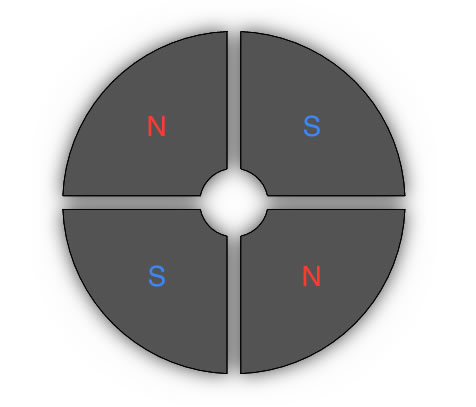 This magnetization pattern can be achieved in any even number of poles, all giving different responses to holding force and other testable magnetic characteristics. Without changing the permanent magnetic material, the mass, or the shape of the magnet at all, we can achieve different effects. The pattern shown above is a multipole magnet with 4 alternating poles on the face. The empty space between the sections represents an “interpolar region” where the pole is ill-defined, transitioning from North to South. This region is not very effective and is essentially dead space. This means that we’ve negated some of the potential energy in a holding magnet by creating this space, but the other effects outweigh that loss and can create a much stronger holding force because of the new multiple directions of flux lines, causing the lines to have more directions to travel and can therefore carry more flux in more places between the magnet and the held object, possibly resulting in a higher holding force in certain applications. MULTI-POLE MAGNETIC CIRCUIT 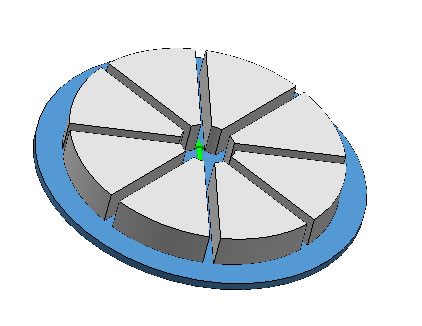 Using FEA (Finite Element Analysis) software we can estimate the possible holding forces from different numbers of poles quickly and fairly accurately to directly compare them in similar situations. For comparison, a magnet has been created using a 25mm diameter ring magnet, with a 5mm inner diameter, 3mm thickness, and three configurations of poles; 1 pole per ring face, 4 poles per ring face, and 8 poles per ring face. Holding force will be measured against 3 different soft magnetic materials and another magnet (of identical configuration). The 3 materials chosen were 1010 cold rolled low carbon steel, a 50% iron 50% cobalt material, 416 stainless steel; and then of course the identical N52 Neodymium Iron Boron magnet mirrored so that opposite poles were attracted. Shown above is the 8 pole on the ring face configuration mating against the 1010 steel. All mating surfaces, except for the identical magnet, were created with a 30mm diameter. MULTI-POLE MAGNETIC CIRCUIT

Table of holding forces and other data