Taking a DC brush motor as an example, the magnetic poles of the permanent magnets are arranged on the same circumference, and the blue lines of the magnetic force represent the magnetic circuit of the motor. 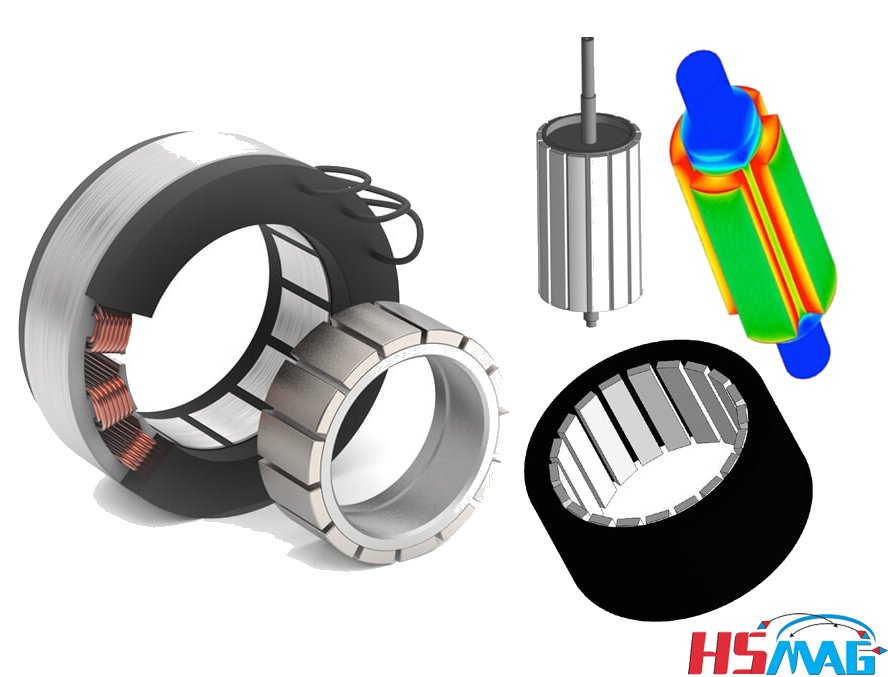 For DC motors, under the same winding parameters and test conditions, the higher the remanence, the lower the no-load speed, and the smaller the no-load current; the greater the maximum torque, the higher the efficiency of the highest efficiency point. In the actual test, the level of no-load speed and the size of the maximum torque is generally used to judge the remanence standard of the magnetic steel.

For the same winding parameters and electrical parameters, the reason why the higher the remanence is, the lower the no-load speed and the smaller the no-load current is, because the running motor has a sufficient reverse sense at a relatively low speed The generated voltage reduces the algebraic sum of the electromotive force applied to the winding.

The influence of coercivity

The influence of squareness

The impact of performance consistency

Inconsistent residual magnetism: Even the individual with particularly high performance is not good. Due to the inconsistency of the magnetic flux in each unidirectional magnetic field section, the torque is asymmetric and vibration occurs.

Coercive force inconsistency: In particular, the coercive force of individual products is too low, it is easy to produce reverse demagnetization, resulting in the inconsistency of the magnetic flux of each magnetic steel and the motor vibration. This effect is more significant for brushless motors.

Influence of shape and tolerance of magnetic steel on motor performance

The influence of magnet thickness

In the case of fixed inner or outer magnetic coils, when the thickness increases, the air gap decreases and the effective magnetic flux increases. The obvious performance is that the same residual magnetism reduces the no-load speed, the no-load current decreases, and the maximum efficiency of the motor improve. However, there are also disadvantages, such as increased commutation vibration of the motor, and the efficiency curve of the motor becomes relatively steep. Therefore, the thickness of the motor magnet should be as uniform as possible to reduce vibration.

The effect of magnet width

For close-packed brushless motor magnets, the total cumulative gap cannot exceed 0.5 mm. If it is too small, it cannot be installed. If it is too small, the motor vibration and efficiency will be reduced. This is because the position and magnetic of the Hall element that measures the magnet position The actual position of the steel does not correspond, and the consistency of the width must be guaranteed, otherwise the efficiency of the motor is low and the vibration is large.

Magnet chamfer size and the effect of non-chamfer

Without chamfering, the rate of change of the magnetic field at the edge of the motor’s magnetic field is large, causing pulse pulsation of the motor. The larger the chamfer, the smaller the vibration. However, chamfering generally has a certain loss of magnetic flux. For some specifications, when the chamfering reaches 0.8, the magnetic flux loss is 0.5 ~ 1.5%. When the residual magnetism of the brushed motor is low, appropriately reducing the size of the chamfer is helpful to compensate for the residual magnetism, but the pulsation of the motor increases. In general, when the remanence is low, the tolerance in the length direction can be enlarged appropriately, which can increase the effective magnetic flux to a certain extent, so that the performance of the motor is basically unchanged.