Modern permanent magnets are far removed from the traditional horseshoe magnets. Today, magnets are available in a variety of shapes to suit many applications, and the introduction of magnetic alloys and magnetic-oxide based ceramics has made the simple iron magnets the exception rather than the rule. 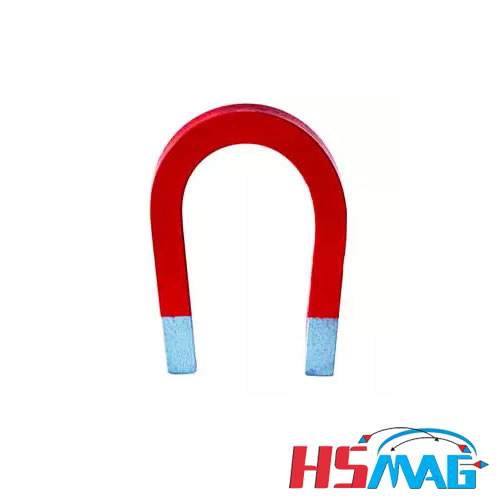 Advances in magnet technology over the past 60 years have naturally led to an increase in the number of applications. A modern household contains more than one hundred magnets, ranging from the refrigerator door catch to the motor inductor of the DVD player.

That being essentially an intrinsic property of the material, magnetism is often explained from a model of the atomic structure of the material. In the classic atomic model, electrons (negatively charged) turn at the same moment on themselves (spin) and around the nucleus (positively charged). This movement can be compared to a electric wire which gives birth to a magnetic dipole, in the same way as electricity going through a wire produce a magnetic field.

In a non-magnetic material, these elementary magnetic dipoles are statistically oriented in all directions, resulting at macroscopic scale in no magnetic field. However in a magnetic material, dipoles are locally oriented in areas called domains. These domains are in natural state statistically oriented through the material, this also produces no resultant magnetic moment. In presence of an outside magnetic field the number of domains aligned with this field increases : there is a magnetic moment resulting in the material which is said polarized. With the increase of the intensity of the outside field the number of aligned domains increases until there is no more not aligned domain : the material is saturated, that is magnetized.

Creation of a permanent magnet requires some energy. This energy is supplied by the magnetizing field, stored in the magnet which afterward can create itself a magnetic field without energy consumption nor loss of intensity, under certain conditions of appropriate usage. So a permanent magnet behaves as a source of energy, from which the potential depends on the magnetic load.

As a general rule a magnet is a integral part of a system. As a result, mechanical and magnetic constraints must be simultaneously considered. Besides, every application has its own specifications, so that a range of materials will be better adapted than the other one to the satisfaction of the specifications of the system.