Magnets increase blood flow – As we discovered in the previous section, it’s claimed that magnets attract the iron in the blood, but this means that it is pulled towards the magnetic underlay and not pushed sideways, not up or down the reclining body where much of the blood actually travels. However, let’s assume now that magnets can, somehow, contrary to scientific evidence, actually affect the iron to increase the flow in blood vessels. Rather than pulling the iron, and therefore the blood, directly towards the magnets, let’s pretend that the magnetic field pushes the iron sideways, say to the right. It doesn’t attract the iron (as magnets normally do), but deflects it in a specific direction. This extra push speeds up the flow and increases circulation. Unfortunately even this idea doesn’t make sense, for the following reason.

Blood is always travelling in many different directions within the body — up, down, across etc. 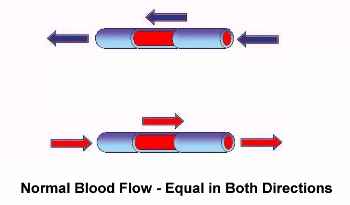 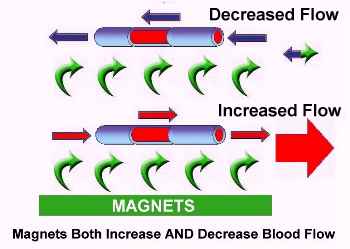 For example, how could magnets increase blood flow in one direction in an artery and in the opposite direction in an adjacent and parallel vein? Any positive effect in one would be a negative effect in the other. If flow increased in the artery it would slow down in the adjacent vein. Remember that the magnets will be affecting all the iron in all your blood in exactly the same manner. Magnets can’t tell the difference between arteries and veins. If magnets are ‘pushing’ the iron in your blood, let’s say towards the right, this will be occurring in every blood vessel, even if the heart is trying to push the blood in the opposite direction. Thus an imbalance would occur, with the heart trying to pump more blood out than it was receiving, or vice versa if you lay the opposite way on your bed’s magnetic underlay. And remember that all your blood has iron, thus magnets wouldn’t just affect blood flow in problem areas, but the entire body. The heart is continuously trying to pump blood up to the brain and down to your legs at the same time. If magnets could somehow increase that blood flow, the increase would all be in one direction, either up or down, but not both. If the brain benefited, the legs would suffer and vice versa. The magnetic field produced by permanent magnets is static. It doesn’t change. It would increase the blood flow in one direction and one direction only. Of course some magnetic underlays alternate the north and south poles of their magnets, but this would result in alternate magnets pushing equally in opposite directions. In other words their effects would cancel each other out. The net effect on blood flow would be zero. So alternating magnetic poles would effectively do nothing and thus have no health impact.

Using magnets of all the same pole however would increase the flow in one direction only, while fighting the efforts of the heart in the opposite direction. 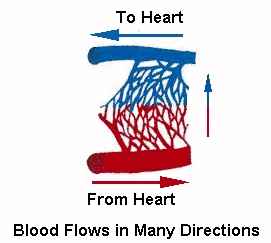 So it’s pretty obvious that if magnets pulled blood to one side of the body or increased the flow in one direction while reducing it in the other, either way this would not be a healthy situation. Your health would suffer rather than improve.

The fact is that magnets don’t attract blood, which anyone can prove for themselves by simply putting a fridge magnet on their skin. Remember that people blush when blood is drawn near the skin surface, so a magnet should also make the skin red. It doesn’t. We also have the fact that people don’t die when they undergo an MRI scan, which should happen if all their blood is being sucked to one side of their body. Remember that the earth’s magnetic field, which affects every one of us continuously, has a magnetic field strength of only around 0.5 Gauss. This is the sort of field strength that our bodies have evolved to handle. A fridge magnet can be around 35 to 200 Gauss whereas magnets commonly used in magnetic therapy are usually between 300 and 1000 Gauss. By comparison, MRI scanners can be up to 200,000 Gauss. Since magnetic therapists insist that their comparatively weak magnets are strong enough to attract blood, the extremely high magnetic field strength of the MRI should suck every drop of blood to one side of the body, effectively killing the patient. Amazing enough this doesn’t happen. Our bodies just aren’t magnetic. Also note that people working in extremely high magnetic fields are found to be no more healthy or unhealthy than those working in normal professions. If magnetic fields really did have a measurable effect on your body, good or bad, it should show up in these people. It doesn’t.