The moving-iron loudspeaker was the first effective electromagnetic loudspeaker design. Today, the design is pretty well relegated to balanced armature headphone drivers, but this driver type is still worth mentioning.

Let’s have a look at the balanced armature headphone driver design to explain the magnets of a moving-iron speaker driver: 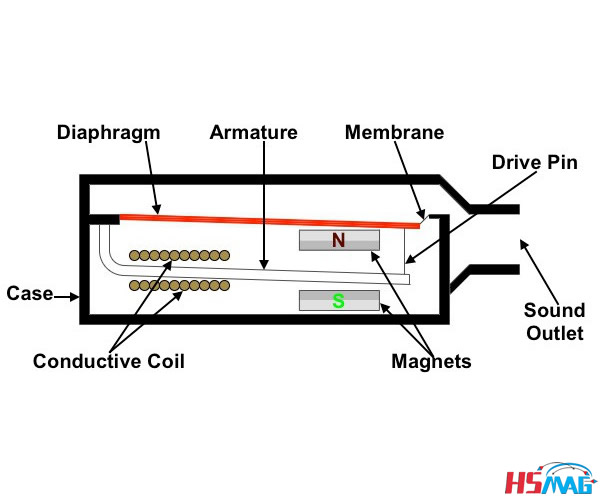 In the driver above, the magnets are placed above and below a conductive armature that is physically balanced in a system. The magnetic poles are to be opposite to the top and bottom of the balanced iron/armature and will produce a concentrated magnetic field at the arm.

The audio signal is passed through a stationary coil which causes a varying magnetic field in the coil. This field is then extended to the armature, which causes it to move between the two magnets.

As the armature moves, the mechanically coupled diaphragm moves and produces sound directly proportionate to the audio signal.

The magnetostrictive speaker design is much less known than the above-mentioned driver designs. However, it uses magnets and, therefore, should be mentioned in this article.

Let’s have a look at a simplified cross-sectional diagram of the magnetostrictive speaker driver: 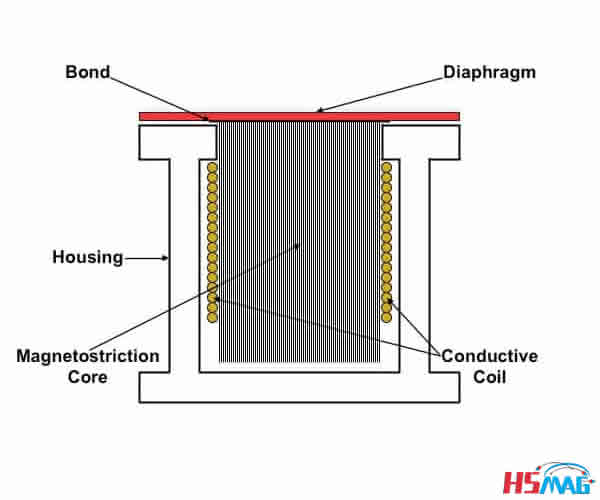 Magnetostriction is a property of ferromagnetic materials that causes them to change their shape during the process of magnetization.

The sound of magnetostriction can be heard as the dreaded 60-cycle hum (or 50-cycle hum depending on where you live) that you’ll hear from power mains transformers.

So as the audio signal is passed through the stationary coil, a varying magnetic field is extended to the magnetostriction core.

The magnetostriction core is made of many thin magnetic plates (magnets) stacked together.

As the plates experience a varying magnetic field, they change shape ever-so-slightly in shape and move a diaphragm that propagates sound waves. When the coil is not experiencing an audio signal, the core and its magnets return to their original shape.

Magnetostatic/Planar Magnetic Loudspeaker Driver Diagram
As we can see, there are magnet arrays to either side of a movable diaphragm. The magnetic field strength is concentrated at the diaphragm.

This diaphragm has a printed/embedded conductive wire that covers its area in a serpentine fashion. As the AC voltage audio signal passes through the conductive element of the diaphragm, a varying magnetic field is produced in/around the diaphragm.

This varying magnetic field interacts with the permanent field of the magnetic arrays. It causes the diaphragm to move (and produce sound) in accordance with the waveform of the applied audio signal.

What Kind Of Magnets Are Used In Loudspeakers?

Most high-quality loudspeakers will use rare earth Neodymium magnets.

Neodymium magnets are the strongest kind of permanent magnet available. They were invented in the 1980s and have since become standard in high-quality electromagnetic audio transducers (headphones, microphones and, of course, loudspeakers).

Neodymium magnets are made from an alloy called NIB, which combines neodymium, iron and boron (Nd2Fe14B). They produce very strong magnetic fields and weigh considerably less than other magnets.

To further improve upon their performance, Neodymium magnets are coated with nickel or resilient plastic to improve durability and resistance to corrosion or rust.

Of course, not all electromagnetic loudspeakers have top-of-the-line Neodymium magnets. Other headphone magnet materials that also perform well include:

Alnico (composed primarily of iron, aluminum, nickel and cobalt, hence the name).
Ceramic (an alloy of iron oxide and strontium carbonate).
Do All Loudspeakers Need Magnets?
Not all loudspeakers work on electromagnetic principles. There are two other common working principles utilized by non-electromagnetic loudspeaker driver designs:

Neither of these loudspeaker types requires magnets to transduce energy and turn audio into sound.

How Strong are Speaker Magnets