Magnets are quite extraordinary. Imagine, a special sort of rock that can stick to some things but not others, and sticks to itself one way but pushes apart the other. It’s actually pretty weird when you think about it, and in Australia – at least- we take them for granted.

But not if you’re a disadvantaged child growing up in Africa. Most of these kids have never experienced magnetism. HSMAG Magnetics have teamed up with my project Science Circus Africa, a travelling science education project, to take magnets deep into sub-Saharan Africa. 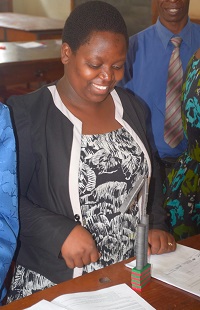 The look on a kid’s face the first time they hold two magnets next to each other and see them snap together or push apart is just priceless. They’ve read about them, done tests on them, seen diagrams and pictures – but the bulk of the kids we reach have never had two magnets to simply play with.

Recently HSMAG ‘s donations of magnets in Zimbabwe caused an absolute frenzy of experimentation (check out the video here) as kids raced around the room discovering which materials were magnetic, playing attraction and repulsion games with their friends, learning that not all metals are magnetic, and exploring magnetic phenomena in a way that only a kid can. Experiencing for the first time a force invisible to the human eye but that creates an effect we can see and feel provoked such curiosity in the kids.

That thrill of discovery and look of absolute wonder is one of the reasons I run this project – science is about making sense of all the weird stuff the universe presents us with. And magnetism – despite it being stuck to our fridges and spinning every electric motor – is still damn weird. It’s caused me to think much more deeply about just how special magnetism is.

HSMAG Magnetics have now been part of two Science Circus Africa projects spanning Zimbabwe, South Africa, Botswana, Zambia and Malawi. Thousands of magnets have been given to hundreds of schools and teachers and are now benefitting tens of thousands of disadvantaged students. On behalf of Science Circus Africa, and its supporters the Australian Government, Questacon, the Australian National University and many Africa partners, I’d like to pass on a huge thanks for HSMAG’s support.

As someone who has used magnets all my life, the kids took me back to that first Eureka moment as the special rock attracted and repelled in a way that only magnets can. HSMAG ‘s magnets are truly attracting African kids to science.

HSMAG ‘s super strong neodymium magnets were extra useful for high school teachers, who use them to teach electromagnetism – building motors and generators.