Research indicates that in general, magnetic therapy works because of the electromagnetic nature of the body. Every cell in our body consists of electrically charged particles that are either positive or negative ions. All are directly affected by exposure to external magnetic fields.
Unlike a magnet’s effect on metals and other magnets, magnetic fields don’t attract or repel ions, but they can deflect ions under certain conditions. The ions must not only be moving, they must move on a path perpendicular to the magnetic field. While very high magnetic fields can affect the body, such as an MRI, the effect is extremely small and very sensitive instruments are required to detect this change. Also when the field is switched off, the effect disappears. To move ions the magnetic field would have to be much, much greater than that generated by the magnets used in magnetic therapy products.

But let’s assume for the moment that the magnets in magnetic underlays are powerful enough to deflect ions within every cell in the body. Would this actually be a good thing to expose yourself to?

You may be aware that one of the disadvantages of cancer treatments such as radiotherapy is that the radiation can’t differentiate between cancerous cells and healthy cells. It acts on both equally and therefore kills both. The same would be true of a magnetic field deflecting ions. Every single ion in your body that is moving in the appropriate direction would be deflected from the path it is presently moving on. For example, ions can move in and out of cells through gateways known as ion channels. Thus if an ion is moving towards an ion channel to exit the cell, the magnet will deflect it from it’s target. The ion will not now exit through the ion channel because of this deflection and therefore the ion’s cellular purpose will not be fulfilled. The cellular processes will break down. The cells will die and then the body. This is a blind action that you are performing with the magnets. The effect is not just felt on the problem area but over the entire body. The magnetic field would affect every ion, not just the ‘unhealthy’ ones. For example, assuming that only 1% of ions need deflecting to correct their action, the other 99% of ‘healthy’ ions in your body will also be deflected and will therefore fail in their action. This is like fixing one problem and causing 99 others. The action of the magnetic field is not specific, and if it really had an effect, then the problems it caused would be astronomical compared to those it corrected.

Exposing these cells to a magnetic field in an attempt to correct the ion in the ‘unhealthy’ cell will deflect the ‘faulty’ ion so that it now lines up with the ion channel, but unfortunately the other ions are also deflected and now miss their ion channels.

As simplistic as these diagrams are, remember that this is how magnetic therapists say that their magnets affect ions. It’s no good claiming that magnets might actually alter the electrical potential of the cell rather than deflect the ions because static magnets can’t do this. Electromagnets can, but they are not the type of magnet used by those promoting magnetic therapy. Also, like Goldilock’s and the bed that was ‘just right’, the strength of the magnet would have to exactly match the problem. Too weak or too strong or deflecting ions in the wrong direction and magnets would disrupt every cell, without even fixing the problem cell. Even ignoring the damage they would do to healthy cells, the magnets would have to be ‘just right’ for each particular problem. Yet the magnetic underlays have the same magnets for every person and every problem. 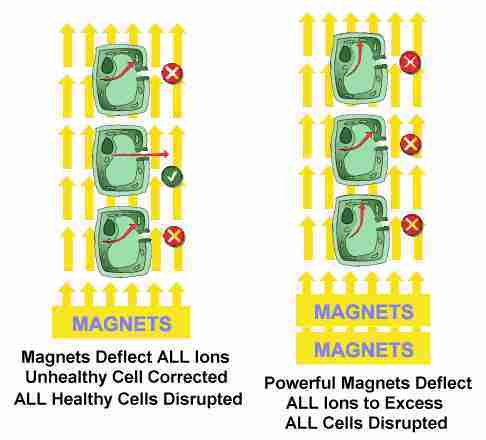 As we’ve said, magnetic fields will only deflect ions moving across the magnetic field. This will be a small proportion of the total number of ions in the body. The field will have no effect on the majority of ions — stationary ions or ions moving in the wrong direction. Thus while magnetic fields could deflect some ions from their current path, they won’t ‘correct’ errant ions, pushing them back onto their ‘correct’ path. Magnetic fields have no idea about the ‘correct’ paths of ions. Every ion that the field can act on will be deflected, whether it is in a healthy cell or an unhealthy cell. So it’s not that magnetic fields couldn’t affect ions, they could if the field was strong enough, it’s just that this field would act equally on all the ions it encountered. Any extremely small positive effect the field may have on a problem area would be completely swamped by the enormous negative effect it had on the rest of the body. By applying the same blanket ‘fix’ to the whole body you will have made your health considerably worse than it was. For every ‘unhealthy’ cell that you brought back into synch, you would push trillions out of synch. The cure would be considerably worse than the disease.