Magnetized Water – Magnetic water remains a little known treatment in the field of magnetic therapy. There is always speculation as to the validity of magnetizing water. Despite this skepticism, magnetic water remains one of magnet therapies most powerful treatments. Many scientists and doctors profess that it is impossible to magnetize water… that water quite simply can not hold a magnetic charge. Our answer to these people is… “do a little more scientific research and you will find that all water in it’s natural state (such as a spring) has a magnetic charge”. 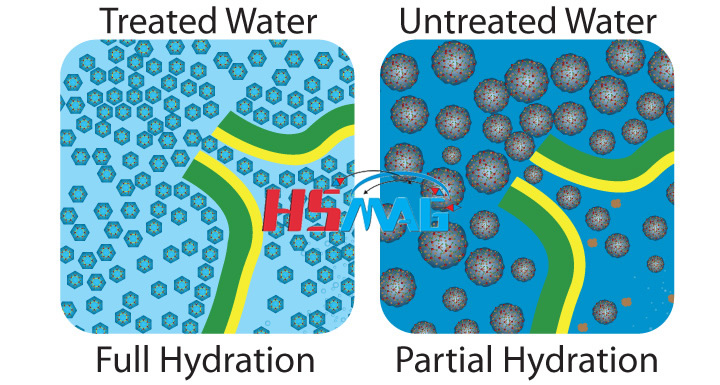 Once water is collected for consumption, it has to be treated and purified. During transportation to the treatment plant the water is carried in under ground metal pipes. The water is de-magnetized by the presence of the metallic lining of the pipes and when it is purified and comes out of the tap it is no longer magnetized. If you drink water from a spring at its source it will be magnetized. The benefits of spring water have long been recognized, how ever once the water is bottled and removed from the source it will only keep it’s magnetism for 3 days before it dissipates. It is not possible to permanently magnetize water.

Your body stores harmful toxins within the tissues (dermis) of the skin, to keep the toxins from poisoning the body they are stored in small pockets of fluid, this is seen as cellulite and feels like lots of little raised bumps (the body can store an extra 2 litres (4½ pints) of fluid containing toxins in the tissues). Toxins are released during many processes in the body such as: during the inflammation process; from the breakdown of medications (particularly painkillers and high blood pressure tablets); and from the chemicals and additives in food and from environmental pollution. Toxins are normally detoxified by the liver and sent to the kidneys for excretion (expulsion of waste products). Some toxins are potentially harmful to your body and can not be safely detoxified by the liver.

As magnetized water increases the size of the water molecule, it’s ability to absorb toxins is much greater! So, as the magnetism of water is absorbed into the blood stream and transported around the body, harmful toxins are drawn out of the tissues and safely transported to the liver and then onto the kidneys for excretion from the body.

In a nutshell, you can lose as much as 2 liters (4½ pints) of excess fluid that you don’t need! The effect of losing this excess waste fluid is that you will have so much more energy, and sleeping will be easier and generally you will have a great sense of well-being.

Magnetic field, when applied to normal water, restructures the water molecules into very small water molecule clusters, each made up of six symmetrically organized molecules. This miniscule cluster is recognized by the cell as “bio-friendly” due to its hexagonal structure and because the toxins cannot travel within the cluster, and easily enters the passageways in plant and animal cell membranes. The result provides maximum, healthy hydration with less water. 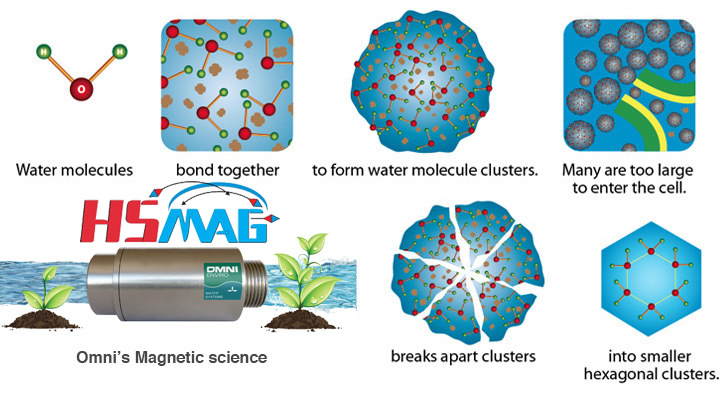 Since the magnetic structuring breaks all minerals into smaller particles, salt in the soil is broken down by the structured water, causing it to sink deep into the soil, away from plant roots, and wash away. The desalinization happens quickly over a season, creating much healthier plants, greater yields, and better final product.

Since the hexagonal water molecule cluster won’t allow the bonding of minerals to it, magnetically structured water removes scaling from pipes and won’t allow new scaling to take effect.

The Omni Enviro H2O ENERGIZER is a simple flange containing powerful, specific inductance magnet tubes that restructure the water and minerals passing through them into a more fulfilling and productive bio-available form.

Many natural as well as man-made influences have affected the molecular structure of our water supply.
Environmental waste, toxins, and minerals – as well as chemical additives that treat our municipal water supply – combine to produce “dead water.”
You can try to filter and purify this water, but it cannot be biologically active without the application of magnetic resonance.
By improving the ability of our drinking water to dissolve compounds, we can increase its oxygen content. This enhancement, in turn, makes natural nutrients more readily available to our bodies.
In addition, Magnetized Water has increased alkalinity, which helps to regulate the body’s pH level.
Benefits to Our Environment
Finally, by safely and efficiently activating existing water supplies, we practice water conservation and environmental sustainability.