Formerly it was beleived that magnetism represented an independent physical phenomenon. It is a fact, however, that magnetic processes are connected to electric processes, that each electric process is a magnetic one at the same time, and vice versa. For a better understanding of physics related to magnets we have listed some common expressions and their meaning, and have described them as simply as possible.

Air Gap:
It is the non-magnetic space between the poles of a magnet, which can be filled with any non-magnetic material such as brass, wood,….

Anisotropy:
The characteristic of a substance for which a physical property, varies in value with the direction. Anisotropic magnets are exposed to a high magnetic field, in a determined direction, during the sintering process. In this magnetic field direction, higher magnetic values are obtained than in a transversal direction.

Calibration:
(Of A Permanent Magnet) Generally, a magnetic flux tolerance is of ±10%. However, in some applications, a smaller tolerance is required. 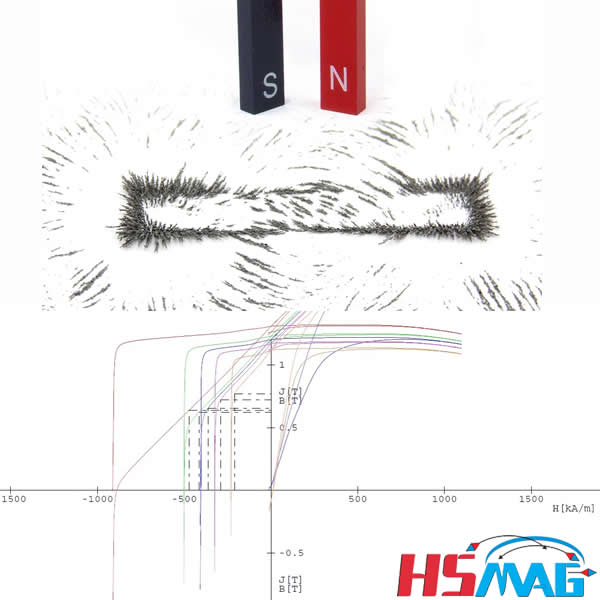 Capacitor:
Measured in farads, a device that stores electrical energy in a similar way an inductor stores magnetic energy.

Coercive Force, Hc:
The value of demagnetizing force that reduces residual induction to zero. The maximum coercive force, as measured on a saturated magnet, is proportional to the remanent flux density. Calculated in oersteds or KiloAmps per meter (kA/m).Magnetism Magnetic Terminology and Definitions

Coercivity, Hci Or Ihc:
The resistance of a magnetic material to demagnetization. It is equal to the value of H that cancels the magnetic induction, and is calculated in oersteds or KiloAmps per meter (kA/m).

Curie Temperature, Tc:
It is the temperature above which ferromagnetic materials become paramagnetic, losing substantially all of their permanent magnetic properties. It normally depends on the chemical composition of the magnetic material.

Demagnetization Curve:
The part of a hysteresis loop which is found in the second or fourth quadrant, and which defines the main magnetic properties of a magnet. The points on the curve are designated by the coordinates Bd and Hd.

Electrical Resistivity:
It is the electrical resistance to current flow in ohms per unit length of the material concerned.

Energy Product:
Calculated in megaGauss-Oersteds, MGOe, or kJ/m3 , it is the energy that a magnetic material can supply to an external magnetic circuit when operating at a point on its demagnetisation curve.

Flux Density:
It is the magnetic field, represented conceptually as “magnetic lines of force”, calculated in gauss or Tesla. Φ = B.A.

Flux:
It is the magnetic field, represented conceptually as “magnetic lines of force”, calculated in gauss or Tesla. Φ = B.A..

Fluxmeter:
Device used to measure the change of flux linkage with a search coil. It is a Hall-effect generator in which a semiconductor is shaped into a small thin piece suitable for inserting between the poles of a magnet to make measurements of magnetic field strength..Magnetism Magnetic Terminology and Definitions

Gauss:
Unit of measure of magnetic induction, B, in the CGS system. The Gauss unit is named after the mathematician Friedrich Gauss.

Hysteresis:
It is the tendency of a magnetic material to retain its magnetization, causing the graph of magnetic flux density versus magnetizing force to form a loop. The area of the loop represents the difference, or hysteresis loss, measured at low frequency, between energy stored and energy released per unit volume of material per cycle.

Induced Flux Density:
It is the flux density generated in a core or soft magnetic material.

Initial Permeability:
It is the result of relative permeability of a magnetic material at a very low flux level.

Intrinsic Coercivity:
Value measured in oersteds or kA/m, which indicates a material’s resistance to demagnetisation. The maximum value is obtained after the material has been saturated, that is fully magnetized.

Irreversible Loss:
This occurs when a magnet is fully or partially demagnetised due to exposure to high or low temperatures, or other external demagnetising fields or factors. By remagnetizing the magnets, these losses can be solved.

Magnetic Field Strength:
It is the magnetizing or demagnetising force, measured in oersteds, which determines the ability of an electric current, or a magnetic body, to induce a magnetic field at a given point..

Magnetic Induction :
Magnetic induction, B, is the magnetic field induced by an applied field, H, measured in Gauss. It is composed of two parts. One part results from the laid down field, the other from the matter.

Magnetizing Field :
When a magnetic field is applied to a material, it is magnetized.

Maximum Operating Temperature:
The maximum temperature of exposure that a magnet can resist without an instability or structural changes being caused to its properties.

Maxwell:
The unit of the magnetic flux in the cgs electromagnetic system. One Maxwell equals one line of magnetic flux

North Pole:
The magnetic pole which attracts the geographic North Pole of the earth.

Oersted:
The unit of magnetic field strength, H, in the cgs electromagnetic system. One oersted equals a magnetomotive force of one Gilbert per centimetre of flux path. One oersted x 0.08 = 1 kA/m.

A device, which is also named hysteresisgraph, used to calculate permeability on low-permeability cores, which measures the magnetic characteristics of a material.

Remanent Or Residual Magnetism, Br:
Also called remanence or residual flux, is the remaining flux density in a magnetic material after an applied magnetic field has been removed, or reduced to zero. Br is expressed in Tesla (T), Millitesla (mT) or Gauss (G).Magnetic Terminology and Definitions

South Pole:
The south pole of a magnet is attracted towards the south geographic pole of the earth.

Temperature Coefficient:
Changes in temperature produce reversible changes in magnetic properties. When a magnet has been exposed above or below a critical temperature, sometimes due to the materials magnetic charecteristics, an irreversible cos can be produced, however these characteristics can be recovered by re-saturating.

Weber:
It is the unit for magnetic flux. The amount of flux which when linked at a uniform rate with a single-turn electric circuit during an interval of 1 second, will induce this circuit an electromotive force of 1 volt.